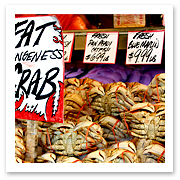 A longtime favorite of travelers, Seattle is becoming an increasingly popular starting point for visitors to Alaska. Four companies—Celebrity Cruises, Holland American Line, Norwegian Cruise Line, and Princess Cruises—all depart from the city for some of their Alaskan voyages.

Seattle has much to offer: a beautiful setting, abundant attractions, great restaurants, friendly residents, and Pike Place Market, which provides a wonderfully earthy focal point right in the heart of downtown.

Get up with the sun and stroll to Pike Place Market. Take the steps down to the docks and visit the Odyssey Maritime Discovery Center or the Seattle Aquarium.

In the afternoon take the two-minute monorail ride from Downtown’s Westlake Center mall to the colossal Seattle Center. Here, if you can brave the height, ride the elevator up the Space Needle, which punctuates Seattle’s skyline and boasts 360 degree views. 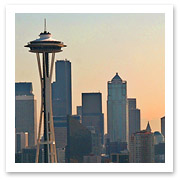 Ride the city’s trolley to Pioneer Square to browse some of the city’s top art galleries. Impressive art awaits at both the Greg Kucera Gallery and the Stonington Gallery. Hungry? Pop into Café Paloma for a light snack and coffee break.

Return to Pike Place Market in the early evening to browse its stores just before they close up shop. Outdoor enthusiasts should be sure to stop at the flagship store of REI—it’s spectacular.

Top off the day with a night on the town—in Belltown. After dinner at buzzing Restaurant Zoë, catch a concert or burlesque show at Rendezvous (photo,bottom).

Getting to the Port
Ships from the Norwegian Cruise Line and Celebrity Cruises dock at the Bell Street Pier Cruise Terminal (Pier 66). Pier 66 is within walking distance of downtown attractions, and the Waterfront Streetcar provides trolley service along the shoreline to the cruise terminal. Holland America Line and Princess Cruises dock at the Terminal 30 Cruise Facility at the south end of the downtown waterfront near the baseball stadium. Terminal 30 is a taxi or city bus ride from downtown. 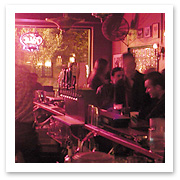 Airport Transfers
The major gateway is the Seattle-Tacoma International Airport (Sea-Tac, www.portseattle.org/seatac). The airport is about 15 miles south of downtown on I-5. It usually takes about 30-45 minutes to ride between the airport and downtown. Metered cabs make the trip for $25-$30. Shuttle Express has the only 24-hour door-to-door service, a flat $20 from the airport to downtown (including the cruise ship piers). You can make arrangements at the Shuttle Express counter, upon arrival. Gray Line Airport Express (http://graylineseattle.com/airportexpress1.cfm) provides service to downtown hotels for $10.