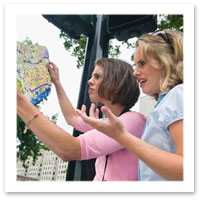 Sometimes a memorable moment from a trip doesn’t consist of something you saw–but something you heard. For over six years, travelers have been using one particularly funny topic in our Forums to share the amusing things they’ve overheard (or said themselves) while traveling. If you need a good laugh, a quick glance at some of the entries should do it. Below are just a few of our favorites.

From the Forums: What’s the Funniest Thing You’ve Overheard While Traveling?

Henry VIII Wanted to Be a Pilot

“Several years back at Hampton Court, outside of London, the Concorde flew over just under the speed of sound. Someone asked our tour guide: ‘Why would Henry VIII build his castle right in Heathrow’s flight path?’ The tour guide, in full costume, totally lost it and could not stop laughing.” — overheard by Fodor’s member Bowdoin

Look at All of These Horrible Flowers

“In Death Valley, California, after an robust winter rainfall, there is a rare display of brilliant wildflowers covering the arid land. During an exceptional wildflower-laden April trip, we overheard a young woman angrily complaining into the payphone, “Everywhere you look, there is nothing but yellow flowers! And if that’s all there is, I’M LEAVING!!” — overheard by Fodor’s member elnap29

An Elephant Takes a Road Trip

“While on a walking tour in Amboseli National Park, the Maasai guide mentioned that the track in the ground was from the elephant dragging his trunk; a girl of about 18 asked where he was taking it!!! My companions and I could hardly keep our composure.” — overheard by Fodor’s member felicia

“Heard at the Venice train station. A woman with a group of people around her telling them “Just because I planned this trip for everyone does not mean I am in charge of you having fun!” — overheard by Fodor’s member gracie04

Japan Looks So Tiny From the West Coast

“Atop the Space Needle in Seattle: ‘Is that Japan?'”

Mirror, Mirror on the Wall

“I was in a restaurant in Paris and before the meal I needed to use the ladies room. I was so busy looking at the different entrees and platters on the tables as I wound my way down the aisle of carpet that I didn’t pay attention to where I was going. Suddenly a waiter came up to me and said very gently, “The lady coming toward you; she looks familiar, no?” I looked up to see myself staring back in the mirror that covered the entire wall. He then pointed me to the restrooms.” — experienced by Fodor’s member Dottee

“My husband and I visited Munich, Dachau, & Hohenschwangau. It was about 10 pm, and I was exhausted. We had stopped for dinner and there had been a waitress that spoke really good English. We couldn’t find a hotel, so we went back to the restaurant to ask if she knew where one was. She was no longer there, so I decided to ask the bartender. I completely lost all of my German, and so I just took out a map of the town, said ‘bitte?’ (hotel) and made a ‘sleeping’ gesture (laid my head down on my hands to the side). The bartender cracked up and said Nein, Nein….and showed me his wedding band. I was so embarrassed I just left.” — experienced by Fodor’s member HeatherH

“As we were about to enter what is now Tarzan’s treehouse at Disneyworld (obviously a man-made tree) a woman gazing up says to her companion, ‘My goodness, how old do you think that tree is?’ (hmmm, I think, maybe 25 years?)” — overheard by Fodor’s member ms_go

Monkeying Around with Modern Art

“A woman remarks while looking at a piece of modern art in Berlin’s Neue Nationalgalerie: ‘If you gave a monkey paper and some crayons, I think they could have made this.’ — overheard by Fodor’s member JoeTro

Welcome to the Galapagos Zoo

“This wasn’t actually on vacation, but upon returning. I was showing my aunt pictures from the Galapagos and she looked at me very seriously and asked, ‘so, who feeds all those animals?’ — overheard by Fodor’s member naturegirl510

“Sitting on the steps of Sacré-Coeur in Paris, overhead two young women perusing brochure of Southern Germany and planning the later stages of their trip:

1st woman: “Do we want to go to this New-swan-stine castle built by this mad king they talk about in here?”

2nd woman: “No, I heard he just copied the one in Disneyland.” — overheard by Fodor’s member twoflower