Deals Leila Najafi Attention West Coast: You Can Now Book Flights to Paris for as Little as $321
Home  >  News   >   In Mexico City, a Frida Kahlo Centennial 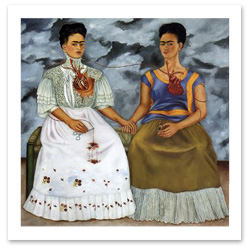 Bat-wing eyebrows, bright jewelry, and disarmingly candid self-portraits were among her trademarks, and Mexico City was her home. Frida Kahlo, the celebrated Mexican artist who married Diego Rivera twice and had affairs with both Leon Trotsky and Isamu Noguchi, was born 100 hundred years ago this year. You may be fooled by some accounts of her birth date — she declared it as 1910 to align herself with the beginning of the Mexican Revolution.

And revolutionary she was. Her tumultuous relationship with the great muralist Rivera, her various affairs with both men and women, her soulful paintings, and her communist bent made her a woman ahead of her time. After a tragic tram accident during childhood left her bedridden for months, she relied heavily on her own image for inspiration (story goes that her mother placed a mirror above her bed during those agonizing months). Indeed, it’s hard to look at her haunting self-portraits without feeling a pang of the suffering she experienced throughout her life: on top of the tram accident, she also suffered from polio, endured various miscarriages, and had one leg amputated late in life. For all her anguish, she cut a dramatic, unforgettable figure, and her art managed to convey a deep sense of wonderment at the world.

Mexico’s lively capital celebrated the 100-year anniversary of Kahlo’s birth with an exhibition at the Museo del Palacio de Bellas Artes, where many of Kahlo’s works were on display, plus nearly an entire floor devoted to photographs of her life. If you missed that exhibit, which closed in August, you should still go to the Palacio de Bellas Artes to watch the world-renowned Ballet Folklórico and to see legendary murals by Rivera, Orozco, and Siqueiros inside the building. 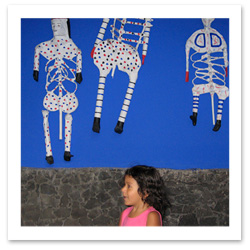 And Frida Kahlo enthusiasts, don’t fret. There are still various sites you can visit throughout the city that will illuminate the details of her life. The first stop should be in the leafy neighborhood of Coyoacán, where Kahlo and Rivera made their home in the Blue House (photo, right) from 1929 to 1954. Coyoacán’s Museo Frida Kahlo (also called La Casa Azul, or the Blue House) is a veritable altar to Frida and Diego. Rooms have been painstakingly preserved, with boots and a jacket hanging in the corner of one room and dishes and trays displayed lovingly in another. Mexico’s largest collection of retablos, or small religious paintings, adorns one entire hallway. Frida’s death bed, with a poster of butterflies that Noguchi gifted her hanging nearby, is followed by a room displaying the urn holding her ashes. Friendly cats live in the large yard, where you can visit the gift shop and have a café con leche.

In his will, Rivera instructed friend and patron Dolores Olmedo Patino not to open the contents of various trunks and sealed rooms in La Casa Azul until 15 years after his death. Olmedo, a rumored mistress of Rivera’s, was worried about incriminating materials, so she chose to wait until her own death to allow the house to be explored thoroughly. In 2004, at long last, the house was open to historians and investigators, who found photos, clothing, sketches, letters, and memorabilia that helped to illuminate Frida Kahlo’s life further. Various pieces are currently on display at La Casa Azul, including vibrant costumes and early sketches. 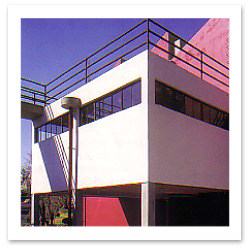 Continue the delicious voyeurism in the nearby neighborhood of San Angel, at the Museo Casa Estudio Diego Rivera y Frida Kahlo, (photo, right) where Kahlo and Rivera also once lived and worked. Many personal items, from paintbrushes to books, are here, poised as if they’ve just been put down. Next up, take a cab to Museo Dolores Olmedo Patino, on the outskirts of the city. Exploring Olmedo Patino’s house and gardens is the perfect way to spend an afternoon; there are also works by Kahlo and even more by Rivera on display. Look for peacocks and Mexican hairless dogs (Xoloitzcuintles) on the lavish grounds.

Finally, head to the Museo de Arte Moderno (MAM), which is just across the way from the world-renowned National Anthropology Museum in Chapultepec Park. MAM has in its collection Frida’s famous painting Las Dos Fridas, (photo, top) in addition to an impressive array of works by other big names, including Rivera, Orozco, and Costa.

Whether you’re going to Mexico City specifically for the Frida Kahlo centennial, or you’re simply dropping by various sites to learn more during your visit, this is a great year to do it. Viva Mexico, Viva Frida!