News Ronny Maye Should You Cancel Your Vacation to an Area Impacted by a Natural Disaster?
NewsFrench Country Waterways Cruises Champagne 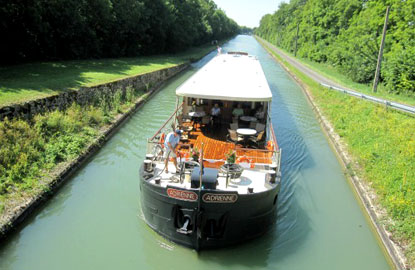 French Country Waterways has mastered the art of the leisurely French canal cruise, offering laidback luxury aboard elegantly appointed hotel barges, and slow-paced, immersive encounters with little-traveled pockets of France. We recently sailed aboard the line’s Adrienne for a weeklong all-inclusive canal sailing through Champagne, where the world’s most celebrated sparkling wines are made. It is the setting for quaint villages and cathedral-anchored medieval cities, sweeping vineyards and sunflower fields, historic sites and battlefields, and quiet stretches of canal-lined countryside.

The two-deck barge features staterooms on its lower deck, and public spaces on the upper level. The main salon sitting area comes with a library of books, games, a stereo, and loaner laptop; an adjacent bar is stocked with premium spirits and beverages. The separate dining room sets the stage for meals, while the canopied outdoor sundeck is a perfect perch for soaking up the passing Champagne countryside; it doubles as an alfresco lunch venue.

Six guest cabins come draped in burgundy and gold hues, with ample storage in maple-colored armoires and nightstands, and king- or twin-size beds. Each unit offers individual climate control; that aside, rooms are largely devoid of technological trimmings; they are sans phones, TVs, or Internet, though Wi-Fi is available in some cabins and in the main lounge (as intermittent signals permit). Small porthole windows look out just above the surface of the canal.

The relaxing onboard atmosphere, slow pace of the barge, and absence of distractions like TVs and phones lend well to good, old-fashioned R&R, as most passengers bounce between reading, admiring the passing French countryside, and enjoying wine or cocktails on deck or in the lounge.

The stretches between locks on the slow-moving barge (averaging about 4mph) provide an opportunity to disembark and walk, jog, or bike on the canal-side towpaths; bicycles are freely available for guest use. On our particular voyage, the chef also put on a short cooking demo in the galley, while the captain invited guests up to the wheelhouse.

Daytime dress code is casual, and comfortable sportswear and walking shoes are encouraged. Evenings are a chance for informal elegance, with four-course dinners served at a common table. The more formal captain’s farewell dinner and onshore dining excursion require jackets for men and dresses or nice pantsuits for women.

Few cruise experiences offer meals as memorable as FCW, which provides a world-class showcase for gourmet French cuisine, complemented by fine wines. Fresh-from-the-village ingredients are incorporated into artful dishes prepared by the onboard chef. Aside from being delectable and thoroughly enjoyable, meals border on educational, with wines, cheeses, and menus described in detail by the chef and onboard hosts/hostesses.

Breakfasts include fresh pastries and breads (egg dishes on request), while lunches are typically served buffet style, with a main dish, quiche or tarts, and assortment of salads. Lingering four-course dinners (appetizer, main course, cheese and salad, and dessert) focus on the country’s rich culinary traditions, with an exceptional assortment of entrées featured throughout the week. Cheese plates incorporate three French cheeses, with cow-, goat-, and sheep-milk varieties regularly represented. Most dietary restrictions reported in advance are thoughtfully accommodated.

Both lunch and dinner are paired with a selection of two French wines (one red, one white), including frequent selections from Grand Cru and Premier Cru vineyards. Of course, being the Champagne region, expect a healthy flow of bubbly.

Two formal dining highlights include a captain-led onshore dinner at the Michelin-starred Les Crayeres in Reims, where a mouthwatering menu gourmand feast is served (included in the fare), and the festive multicourse captain’s farewell dinner.

The English-speaking, six-person crew largely shared duties as hosts, cleaning staff, deckhands, tour guides, and bus drivers, and, on our sailing, were a mix of French, German, Italian, and English nationals. Friendly and knowledgeable, the pleasantly professional team showed exceptional attention to detail, insights into local culture, and made for cordial company all around.

Adrienne‘s intimate size and shared dining experiences lend well to socially inclined passengers looking to make fast friends. Expect an onboard demographic that skews toward affluent Americans (and the occasional Canadian), ages 50 and up. Passengers are typically well-traveled and are commonly repeat visitors to France. Short of charters, the adults-oriented FCW experience is not suitable for children. 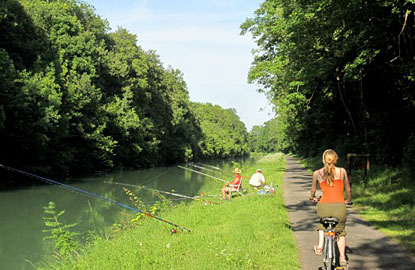 Six-night voyages cover a captivating, yet concise, slice of the Champagne countryside, alternating canal runs between the tiny towns of Maizy and Chateau-Thierry. Access to and from the ports is via 90-minute motor coach transfer from Paris.

The typical barge itinerary incorporates a half-day spent navigating the canals, and another half-day out on guided excursion, via private motor coach; the ship moors overnight. Excursions are offered daily and are included in the rate.

Visitors to the Champagne region can, of course, anticipate vineyard visits and bubbly tastings. Our voyage also brought us to the renowned Champagne house Moët & Chandon, set in the Champagne capital of Epernay, and to the family-run Champagne House of Ployez Jacquemart.

A visit to the ancient French coronation city of Reims and its cathedral (with its stunning Marc Chagall windows) is another highlight; in season, a spectacular evening sound-and-light show illuminates the cathedral. Perhaps lesser known are the region’s historical ties to great battles like those of WWI, commemorated on a somber but insightful tour to the battlefields of Belleau Wood and the nearby American Cemetery.

The Adrienne runs Champagne itineraries through early November. Rates, starting from $5,295 per person, are inclusive of all onboard meals and drinks (including wine and spirits), a Michelin-starred dinner ashore, daily excursions, bicycle use, and Paris transfers. Additional gratuities typically run about five percent of the total cost of the cruise.

Note that in 2013, Adrienne will move to the Burgundy region, while the Princess will operate sailings in Champagne from April through June. Visit fcwl.com or call 800-222-1236 to book.