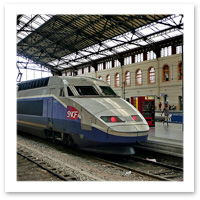 Trains are a wonderful way to experience France. But, like rail systems everywhere, they can sometimes present you with an impenetrable thicket of timetables, stations, and special tickets. That is unless you know what you’re doing. So without further ado here are the key things to know about domestic and international train travel in and out of Paris. We’ll save the Paris mètro and RER for a later post.

It is best—and in many cases, essential—to pre-book your train tickets. This requires making a reservation (which carries an additional charge of about 10 euros a person) online, by phone, or at the train station. Many travelers opt to book tickets from Rail Europe but a cheaper option is to go through the French national train agency, the Sociète Nationale de Chemins de Fer, or SNCF. In making online reservations, the SNCF web site is one of the trickier ones out there, but, happily, a contributor to Fodor’s Talk Forum has spelled out the process of booking seats step-by-step.

Each of the six international rail stations in Paris serve a different part of Europe. That EurailPass burning a hole in your pocket might keep you from planning ahead—you’ve got total freedom after all!—but at least knowing which station you’ll be coming or going from can save you a lot of hassle when you plan your accommodations.

Get to the station a half-hour before departure to ensure you’ll have a good seat. Before boarding, you must punch your ticket (but not EurailPass) in one of the orange machines at the entrance to the platforms, or else the ticket collector will fine you €15 on the spot. Once you’re aboard, note that smoking is now forbidden in TGVs (the ban now applies to all public transportation in France). Even lighting up in the bathrooms or connecting compartments will land you an on-the-spot fine starting at €65.

The SNCF train network is fast, extensive, and efficient. Be aware that trains fill fast on weekends and holidays, so purchase tickets well in advance at these times. Don’t forget to validate your tickets (composter le billet) at the yellow ticket punchers, usually at the entrance to the platforms (quais). If you board your train on the run and don’t have time to punch it, look for a conductor (contrôleur) as soon as possible and get him to sign it. Otherwise, you’re in for a nasty fine (amende).

Many Rail Passes to Choose From

International travelers have lots of options too. France is one of 18 countries in which you can use EurailPasses, which provide unlimited first-class rail travel in all of the participating countries for the duration of the pass. If you plan to rack up the miles, get a Eurail Global Pass. These are available for various time periods from 15 days ($745 first class, $373 second class) up to three months ($2,090 first class, $1,045 second class). If your plans call for only limited train travel between France and another country, consider a two-country pass, which costs less than a EurailPass. With the two-country pass you can get four flexible travel days between France and Italy, France, Spain, Germany, or Switzerland for $330 to $409.

To and From the U.K.

When you factor in travel time to and from the airport, not to mention flight delays, taking the Channel Tunnel is the fastest and easiest way between France and the U.K. It’ll take you 2 hours and 15 minutes on the high-speed Eurostar train from Paris’ Gare du Nord to London’s St. Pancras Station; 35 minutes from Folkestone to Calais, 60 minutes from motorway to motorway. The Belgian border is just a short drive northeast of Calais. Eurostar trains use the same tunnels to connect London’s Waterloo Station directly with Midi Station in Brussels in two hours.

British Rail also has four daily departures from London’s Victoria Station, all linking with the Dover–Calais–Boulogne ferry services through to Paris. There’s also an overnight service on the Newhaven–Dieppe ferry. Journey time is about eight hours. Credit-card bookings are accepted by phone or in person at a British Rail travel center.

There’s a vast range of prices for Eurostar—round-trip tickets range from €600 for first class to €77 for second class depending on when and where you travel and how far in advance you book.

TGV Train travel in France today is all about the TGV, a network of super-fast trains that are generally affordable and efficient. You can get you from Paris to the Riviera in three/four hours—no sleeping required!

Wagons-lit Although crossing France during the day is usually fast and easy via TGV, a wagons-lit (sleeping car) ticket is the more comfortable way to go overnight.

Première One of two classes of train service in France. Offers more legroom, plusher upholstery, private reading lamps, and computer plugs on the TGV, not to mention a hush-hush environment in which to sleep. Price is usually almost double that of second class.

The travelers in our forums regularly tackle train-related questions for France and the rest of Europe. Here are some recent discussions.