Fashion and culture collide in Paris this spring with four superb exhibitions that brilliantly encapsulate the sophistication, glamour, and opulence of fashion and costume design now and through the ages.

Elsewhere, hop into the Louis Vuitton-Marc Jacobs show at Les Arts Decoratif, where the work of design innovators is showcased through creations for the luxury goods company, Louis Vuitton. For a more theatrical slant, head over to Fondation Pierre Bergé Yves Saint Laurent’s exhibition Kabuki: Costumes du Theatre Japonais, where costumes from the rarefied world of Kabuki performance are on display. 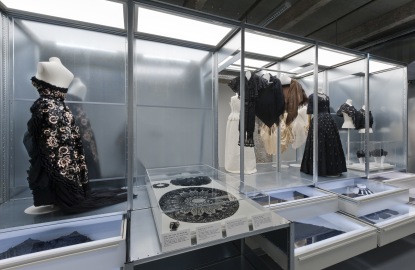 Balenciaga himself assembled the more than 65 items on display in "Cristóbal Balenciaga: Collectionneur de Modes"—the earliest dating from the 17th-century—that both inspired the Spanish master’s work and best expressed his genius; including sketches, embroideries and fabrics, accessories, jewels, and iconic examples of the designer’s haute couture. Rendered with deceptive simplicity, Balenciaga’s exquisite garments are considered among the pinnacles of 20th-century fashion design. The collection on view was donated to the museum in 1979, seven years after Balenciaga’s death, and is displayed in its entirety for the first time. 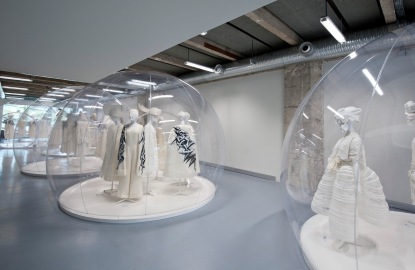 In contrast to the Balenciaga show’s dominant black, "Comme des Garçons White Drama," featuring fashions from the Comme des Garçon Spring 2012 collection, displays the unconventional brilliance of the Japanese designer’s vision all in pristine white. Evoking the ceremonial passage through life—birth, marriage, death, transcendence—these iconoclastic creations evoke many moods and extremes: the fragility of cascading blossoms and lace, the refined interiority of a silk cocoon, the muted violence of the straightjacket. Displayed in transparent bubbles, this resplendent show was curated and installed by Kawakubo herself. 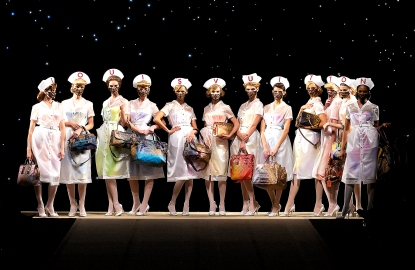 Marc Jacobs was closely involved in staging Louis Vuitton-Marc Jacobs at Les Arts Decoratifs, which contrasts the two innovators whose names were linked in 1997 when Jacobs was tapped to launch the luxury goods company’s first ready-to-wear collection.

Those who know the name Louis Vuitton only by the bags and recent fashions will discover the man behind the legend, who carved his niche as a malletier (trunk maker) in the mid-19th century, at the dawn of the industrial age and the advent of mass travel. Among the displays on view are examples of a well-dressed 19th-century woman’s extravagant wardrobe, who required up to seven outfit changes a day and 30 odd-sized trunks and cases to transport everything from hats to hoops.

Vuitton’s skill as a craftsman, his knack for predicting trends, and his prodigious ingenuity are revealed through drawings, advertisements and examples of his work.

For a taste of Jacobs’ work, follow the pulsing music to the darkened halls upstairs, where a video wall, outrageously outfitted mannequins and a "chocolate box" of the flamboyant bags, displayed like tantalizing bonbons, welcome you to his world. The hyper-charged imagery, exuberant clothing, and iconic examples from Jacobs’ collaborations with emblematic figures in contemporary art, like Takashi Murakami and Stephen Sprouse, make a fine piece of theatrical showmanship. But it’s the global fashion star’s sheer joy that comes through best of all.

Details: On show at Les Arts Decoratifs, through September 9 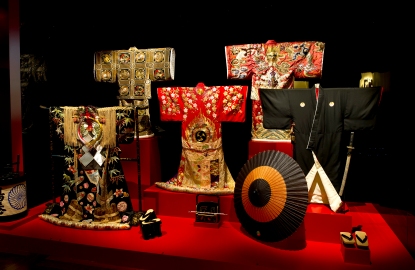 The Exhibition is divided into three parts: costumes from the best-known plays, dance costumes, and ancient costumes. It also includes historical illustrations, videos of live performances, a short English-language documentary, and other accoutrements of this 400-year-old art form that is included on UNESCO’s Intangible Cultural Heritage of Humanity list.

For up-to-the-minute hotel and restaurant recommendations, plus the best planning advice, check out our online Paris Travel Guide.