News Ronny Maye Should You Cancel Your Vacation to an Area Impacted by a Natural Disaster?
NewsBest of Vienna: Four Unforgettable Moments

Long before his jet touched down in Austria early this summer, Fodor’s editor Robert Fisher felt culturally connected to the country that gave us The Sound of Music, the "Blue Danube Waltz," psychoanalysis, apple strudel, the Vienna New Year’s Day concert, Der Schwartzenegger, and Mozart. This is how he experienced the gemütlichkeit sparkle of Vienna and drew those six degrees of separation closer. 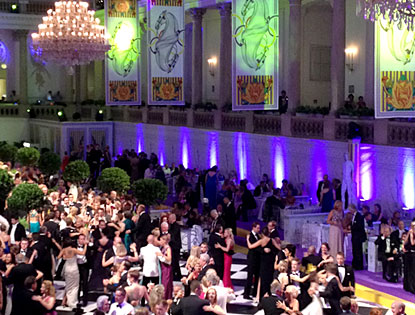 Where better to glide over a dance floor than in Vienna, fabled birthplace of the waltz? Nearly 450 black-tie galas are held during Fasnung—the winter-spanning "Carnival Season" from New Year’s Night through Mardi Gras—but the big news in this fairytale world is that you can now thrill to the white-glove waltzing whirl in summertime, thanks to the new Fete Imperiale. This glamor-fest was held (on June 29th) in the famous Spanish Riding School’s chandeliered arena as a fundraiser for the school’s legendary Lippizaner horses. 5,000 party-goers, including me (fittingly be-tuxed), waltzed in the very space where the snowy white stallions usually do their high stepping.

Kicking off the event, a processional of 200 couples promenaded to the music of the Facher-Polonaise and then danced Linkswalzer, that is, counterclockwise, after which the conductor called out Alles Walzer! ("Everybody waltz!"), which everybody indeed did, though now clockwise. Midnight—always a special moment—was marked by a quadrille furiously danced to music from Johann Strauss’s Die Fledermaus. The dancing went on till 4 am, and no wonder: balls are to the Viennese are what proms are to Americans: a society-approved opportunity to network and spouse-hunt. Nothing wrong with that.

The dress code is unassailably strict: Full-length formal gowns for her, black-tie tux (or tails) for him. To borrow a phrase: When in Austria, do as the Austrians do, if only for a few hours when gentlemen will feel like princes and ladies will feel like Cinderella, with two glass slippers. Tickets for standees cost considerably less than for table-sitters (note that food is traditionally not served at a Viennese ball—though between waltzes, one can nosh on Austrian fare at the bar). 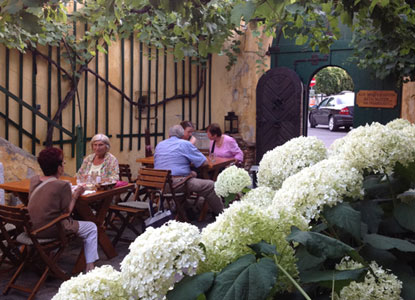 Harvested every September from local vineyards, the city’s tart-tasting wine—the Heurige—is best enjoyed in one of the "heuriger" taverns named after "last year’s wine." One of the best taverns is the Mayer am Pfarrplatz, and the rustic dinner we enjoyed there the evening after the Fête Imperiale was the perfect counterpoint to the gala (and retrospectively made it even more magical). Set in Heiligenstadt, famed for the excellence of its wines and gorgeousness of its gastgarten (garden), Mayer am Pfarrplatz is little changed since 1817, when Beethoven lived on the second floor.

No wonder he composed his Pastoral Symphony here: the tavern is but a few steps from Pfarrplatz—a tree-shaded town square that looks like a stage-set for an operetta—and within sight of a nearby church steeple (poor Ludwig cursed the church bells he could see tolling, but could not hear). The kitchen’s popular pairing of backhendl (fried chicken) and chanterelle risotto with a bottle of Grüner Veltliner—referred to locally as gru-vee (say it as a single word, yeah!)—caused conversation between neighboring tables to flow as easily as this delicious white wine. As the Viennese playfully say, one might drink a glass too many, but one can never drink enough! 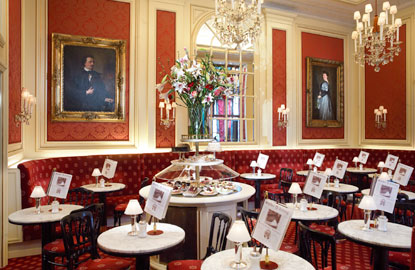 Beauty and the Feast: Dining at the Sacher

Thoughts of Vienna often conjure up images of the city’s Hofburg Palace: rooms with plushy red-velvet, gold-leaf, and crystal chandeliers. Instead of trying to jump the ropes that funnel tour-groups from one palace ballroom to the next, try the next best thing: dining in the mythically grand restaurants of the famed Hotel Sacher. More icon than hostelry, palatial haven for royals and celebs alike, the Sacher is often booked solid by its Stammgast regulars (who wouldn’t dream of staying anywhere else). Pick any of their restaurants awash in Old-World atmosphere-mit-schlag and—as your waiter honors you with a bow worthy of a Habsburg prince—you’ll feel transported to the era of Emperor Franz-Josef.

After downing a festive glass of champagne in the spectacular Blaue Bar, head to the hotel’s elegant "Anna Sacher" restaurant (named after the hotel’s legendary hostess-with-the-mostest), where emerald-green upholstery, parquet paneling, and gilt-leaf Old Master paintings are set aglitter by Lobmyer chandeliers. Even more delischloss than the décor is the cuisine by Master Chef Werner Pichlmaier: my meal—horseradish marshmallow with Western Australian truffles followed by Wagyu sirloin (topped with broccoli puree and crispy onions) and capped with gingerbread crème brülée—was outstanding. The impeccable service befits a chef that repeatedly pleases 700 guests who yearly attend the Opera Ball—a prime charity of the Sacher’s beloved owner, Mme. Elisabeth Gürtler.

Or dine like a Staatsoper diva at the "Rote Bar" restaurant, which faces the Vienna Opera House, with its flaming red-velvet setting and classic food (including Tafelspitz, the top Viennese beef dish). Then join the post-opera crowd at the famed Café Sacher, where framed portraits of Imperial personages seem to command "Let them eat Sachertorte!," which you will do—this, after all, is the birthplace of the famed apricot-chocolate-cake-concoction created, in 1832, by Franz Sacher, pastry-chef to Prince Metternich. As you daub your slice with yet another helping of Schlagobers, you might feel as if you’ve been dipped in the delicious cream yourself. 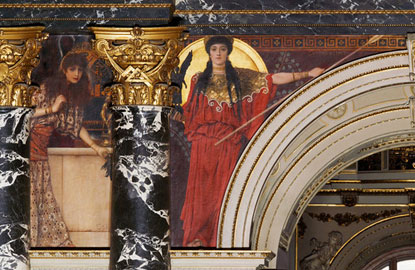 Face-to-Face with Klimt: the "Klimt-Bridge"

Painter of The Kiss and lead artist of the Secession art movement which heralded the Modernist era, Vienna’s Gustav Klimt is Austria’s most renowned artist. Needless to say, this year his hometown is pulling out all the stops in honor of his 150th birthday, including numerous museum exhibits (for the full list, go to Klimt2012.info/en). Yet to be unveiled is the most anticipated event: the finished renovation of the Klimt Studio, the atelier he used from 1911 until his death, in 1918. But of them all, the most eye-popping exhibition is one that, strangely, went almost unnoticed for many years due to its daunting location: 300 feet above the staircase in the main lobby of the famed Kunsthistoriches Museum. Up high, nearly lost from view, are 40 spandrel and inter-columnar paintings which Klimt—working with his brother, Ernst, and Franz Matsch—created in 1890 to depict the history of the fine arts from the time of the ancient Egyptians to the modern age.

Now, to their rescue comes the "Klimt-Bridge"—a steel structure 12 meters off the ground, which finally allows museum-goers to view the works up close. These were among Klimt’s earliest works, but even then there were hints of the glory to come: the Cleopatra on the museum wall is painted in that geometric impasto that would find full fame in his portrait of Adele Bloch-Bauer which (after a sale price of $130 million) now resides in NYC’s Neue Galerie. Because of the resounding success of "Face to Face with Gustav Klimt: the Klimt-Bridge," the show has been extended to January 6, 2013.