Let’s say you’ve spent quality time in Amsterdam seeing the Anne Frank House, sailing along the canals, and enjoying beer in a brown café. Though the city has undeniable charms, it’s now time to venture out for a peek at the non-urban attractions the Netherlands has to offer. (And it’s not all cows and cheese—though you’ll find plenty of those.) Start with our picks for the most rewarding day trips out of Amsterdam—many accessible by using the Netherlands’ excellent network of trains and buses. 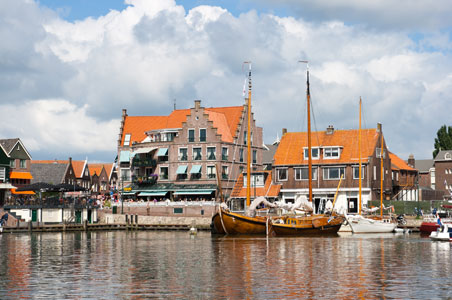 Just a 15-minute drive or bus ride north of Amsterdam (or if you want to go native, an enjoyable bike ride), you’ll enter a world of cute towns with character right on the IJsselmeer river. The first places you’ll hit are Broek in Waterland, a truly mini-Amsterdam with historic wooden houses on canals, and Monnickendam, a larger seaport with an enticing one-Michelin-starred restaurant, Posthoorn, in a historic building in the town center. But the Waterland town most worth your while is Marken, a unique former fishing village with distinctive dark green houses perched on stilts in the water and charming historic streets with museums, cafés, and stores. Sure, the clog factory that greets you at the town entrance is touristy, but it also adds to the Dutch flavor of the place.

From Marken, take a 30-minute ferry ride across the river to Volendam (which runs between March and November). Though often clogged (get it?) with tourists, here you’ll find an even larger selection of restaurants (and souvenir shops, if that’s your thing). Enjoy a seafood dinner before heading back to Amsterdam for the night.

Insider Tip: Buy a Waterland bus ticket for €10, which allows a stop at as many destinations between Amsterdam and Edam as you want over the course of a day.

Getting There: The Waterland bus leaves from the bus platform behind Centraal Station between 6 am and midnight, or take bus 311 or 315 directly to Broek in Waterland. 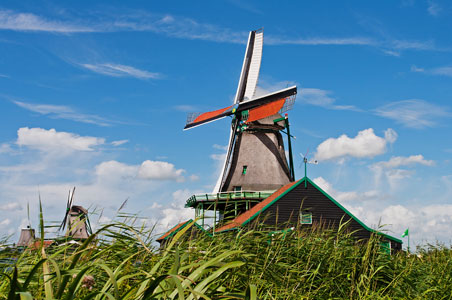 A 20-minute drive, half-hour bus ride, or hour bike ride northwest of Amsterdam, you’ll find Zaanse Schans, an enticing outdoor Dutch history museum on the Zaan river—basically a mini theme park of eight windmills, a cheese-maker, a jenever (Dutch gin) tasting room, a pannenkoeken (pancake) restaurant, and other examples of typical Dutch life, all connected by a pathway that’s perfect for biking or strolling. You can also take a ferry around the entire area, gazing at the sights from the sea. It sounds cheesy, but is actually a fun and rather authentic look at all things Dutch in one easy-to-access package.

Insider Tip: Though you can always view the outside of the windmills, touring inside is only allowed on certain days and hours; check the Zaanse Schans website for the latest opening information.

Getting There: If you opt not to bike or drive, take the 391 bus from the front of Centraal Station. 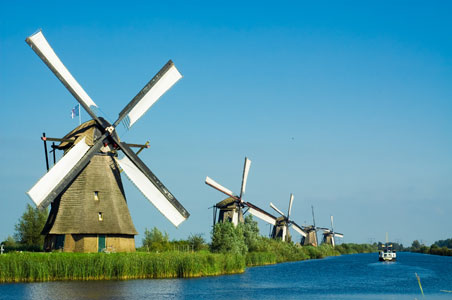 If you just can’t get enough of windmills, you’ll be in heaven at Kinderdijk, the largest collection of mills left in the Netherlands. Nineteen of these beauties vie for your attention along a waterway; one of them is usually open for you to marvel at the mill’s inner workings (daily April to October, 9:30 am to 5:30 pm; weekends November to March, 11 am to 4 pm). Best of all, from April to October you can take a free 30-minute boat ride past the windmills—the perfect vantage point for glimpsing their serene majesty. You can visit Kinderdijk for free every day of the year.

Insider Tip: Stop by on a Saturday in July or August to see all of the mills in action. 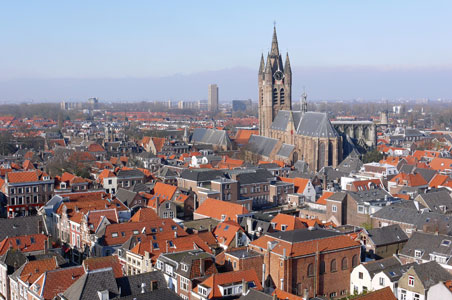 Ask many Dutchies for their favorite town outside Amsterdam, and they’ll say Delft. Why? It offers many of the charms of Amsterdam—cobblestone streets, pretty canals, historic buildings—but in an even more manageable package. It’s easy to walk to all the sites within the old center, including the Nieuwe Kerk (New Church), perched right on the lovely Markt (Main Square), and the Oude Kerk (Old Church)—where Delft’s favorite son, the painter Vermeer, is buried—plus the elegant Museum Het Prinsenhof, a 15th-century convent that’s now a Delft history museum.

Insider Tip: If you’re into Delftware, the delicate hand-painted blue-and-white Dutch pottery, don’t miss a stop at De Porceleyne Fles (Royal Delft), the original Delftware producer; it’s only about a 15-minute stroll from the center of town.

Getting There: Trains leave about every half hour from Amsterdam’s Centraal Station and take an hour to reach Delft.