News Apeksha Bhateja What Are the Chances You'll Get Monkeypox at a Hotel?
NewsFool-Proof Tips for Flying with Kids

Fool-Proof Tips for Flying with Kids 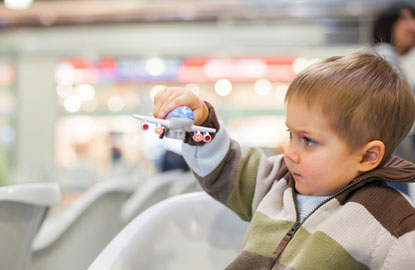 Anyone who’s ever flown with a small child can attest to the challenge: take one toddler, put him in an enclosed space, make him sit still for few hours and, voila: Instant unhappy camper. Add other passengers and presto: unhappy campers all around.

Families in the air have gotten lots of attention of late as stressed passengers vie with each other for a little peace in the increasingly cramped, foodless, and generally joyless unfriendly skies. A not-long-ago New York Times article about flying with kids sparked hundreds of shall we say colorful comments, many asking where they could sign up for a child-free airline.

While there’s no doubt flying with kids is hard, those of us who have landed with children and sanity intact know it’s all about PR: you have to win over the locals. Bonking heads on your way down the aisle with overloaded arms of kid stuff or dozing while your tot plays endless rounds of peek-a-boo with the passenger behind you will win you no friends. Little demonstrations—or even big ones like a glass of wine for your unwitting seatmate if things turn ugly—are more likely to get people to share your pain.

One man I know was completely won over by the mom of a toddler who proactively apologized to him "for losing the lottery" before takeoff. "She was so funny and trying so hard. I was instantly sympathetic." he said. My own strategy when flying with kids has always involved the big three: bring everything, expect nothing, and be prepared to apologize when necessary.

Of course, there are a few things you can do to at least reduce cabin pressure: arrive early, bring rations (food service? Hah!), pack thoroughly (more diapers and wipes then you think you need and changes of clothes), and keep a tight reign (no free-range children staring at sleeping passengers). Be prepared with a bottle or something for infants to suck on for pressure changes. And whatever you do, don’t order any thing to drink that’s red or purple especially if it’s not in a sippy cup. Your seatmates will thank you.

Here are some more indespensible (and hard-won) tips for keeping the skies friendly: 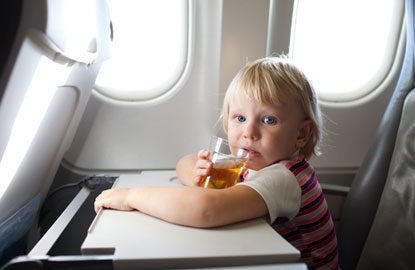 Reserve early: Yes, it’s standard issue advice. But, not only will you get seats together (unless you were secretly hoping to seat the kids elsewhere), you’ll also avoid starting your adventure by asking the rest of the plane to play "shuffle your assigned seats." Alas, it may mean paying for the privilege since, in their quest for cash, some airlines now charge to reserve seats in advance. But it will cut down the stress considerably (extra tip: if you do have to swap seats, offer the kind stranger a glass of wine).

Seats for everyone: Children under age two can sit on a parent’s lap, but it can be a safety hazard and uncomfortable—especially on a long flight. It’s not always cheap either since fees—usually a percentage of the regular fare—and taxes for international travel can add up fast. Be sure to notify the airline of lap children at the time of booking as fares are based on the percentage of current ticket price – not your ticket price. Very occasionally airlines offer discounts for the under-two set, mostly for international travel, but it doesn’t hurt to ask. If you are booking a seat for a child under age two, make sure to inquire about child restraint requirements.

Sit wisely: Use airline websites or SeatGuru.com to investigate seat amenities—such as which ones have power ports (crucial so those electronic kid distractions don’t die). Some parents swear by the bulkhead seats with extra legroom—and no passenger in front of you to worry about kicking (a biggie). There’s no under-seat storage, which can cause calamity if you desperately need something from the overhead bin and the seatbelt light is lit.

Keep ’em busy: Yeah, it’s obvious. But this is the time to get creative. Mine your old camp-counselor days for fun, quiet games ("Build a story," where everyone takes turns contributing sentences, once took me more than halfway from Boston to London). Find out what kids movies are being released for home viewing that week and dangle them as a carrot. Buy or borrow a new video game. Colored paper, kid scissors, and brand new boxes of crayons are like kid catnip. On-board entertainment options often aren’t appropriate for kids so investigate ahead (most airlines publish this info on the website). Headphones for video games and movies are a must and beware those "Pop-o-Matic" travel games that rattle the passenger in front of you every time you play.

Bring surprises: Nobody’s endorsing all-out spoiling, but desperate times, right? And, you’d be amazed at the power of a $1 trinket when it comes wrapped as a present.

Make pit stops: Hit the bathroom before the "Fasten Seatbelt Sign" is lit for the last time. The time between initial descent and arrival at the gate can be an eternity—especially if your potty-training toddler has to go to the bathroom.

Finally, there are always going to be those folks for whom the mere sight of a small child at the gate is the equivalent of, well, of a baby on a plane. If you’ve done everything and there are still tears (yours or your child’s), take heart. True, you may get some withering stares as your little one tests his lung capacity, but you’re doing your best. And even if your fellow passengers don’t have children of their own, those passengers were kids themselves once—probably.

When in doubt, order a glass of wine. Just make sure it’s white.