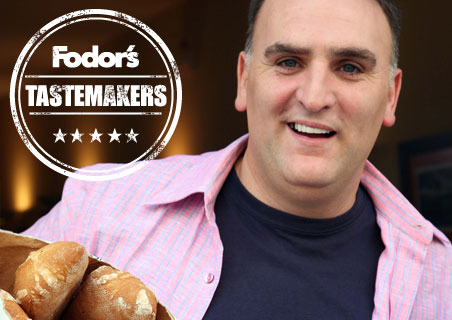 Let us count the ways we love José Andrés. This international culinary powerhouse, a 2011 James Beard "Outstanding Chef," seems to be everywhere these days: heading ThinkFoodGroup, which has opened restaurants around the US, including the recently re-opened minibar by josé andrés in Washington, DC, The Bazaar by José Andrés at the SLS Hotel Beverly Hills and Jaleo in Las Vegas, Washington, DC, Bethesda, and Crystal City; teaching at Harvard and the International Culinary Center; and, oh yes, bringing what’s next in Spanish dining to Americans’ grateful palettes.

When not whipping our taste buds into a frenzy, Andres is tackling bigger issues around the globe with World Central Kitchen, which seeks to solve food insecurity and hunger. For all these reasons and more, we bring you the elBulli-trained chef as our latest Fodor’s Tastemaker to talk about travel, food and the "wildest" thing he’s ever eaten.

New to our Tastemakers series? Well, well, there is more where this came from. Check out the whole lot here!

You were born and raised just outside Barcelona. What do you miss most about it?

I always enjoy wherever I am, but Barcelona is a very beautiful place. I know a lot of people tend to concentrate their time on Barcelona when they travel to Catalonia because it is such a magnificent city, but I think people should make the effort to get outside the city. I would recommend that you visit astonishing places like the mountains of Montserrat, or Cadaques where Dali had his home and his studio, or the Priorat region. Catalonia has wonderful possibilities for any traveler so my advice would be to not just focus on Barcelona but to go out and explore.

Where do you like to eat when you go back to Spain?

I love to eat in so many different restaurants wherever I go. I would tell you that the best places to eat are at the small bars. They are so astonishing, I love going to a place in Sanlúcar de Barrameda called Casa de Balbino, which has the best tortillitas de camarones or baby shrimp fritters. This is probably the ultimate fried tapa. It’s just delightful! 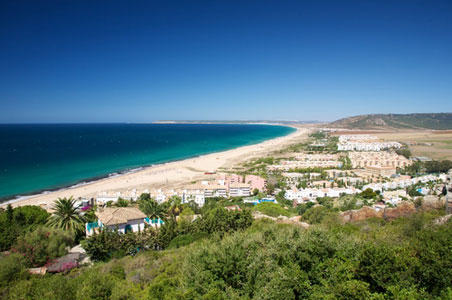 I love to vacation in Zahara de los Atunes. In September and October they have a celebration called "la ruta del retinto" and retinto is a type of beef that is very traditional in Zahara. The meat is basically raised by the sea so there is a certain level if saltiness to it and it is to die for. I love Casa Juanito, El Campero, Albedrio, and Hotel Antonio, which are some of my favorite restaurants. In Zahara you will find the most amazing restaurants within less than 30 minutes away from each other in the most beautiful town you can imagine.

What are some of your favorite restaurants in Los Angeles?

Ever since I opened The Bazaar at the SLS Hotel, I have been able to explore Los Angeles more and more. I love staying at the SLS and being in the kitchen at The Bazaar, I always feel at home. So when I am not in the kitchen with my team, I love Nobu by Nobu Matsuhisa. The bar is really incredible and they do great things there. And in the spirit of sushi, I also love Sushi Zo and always try to stop by when I am in town. Umami is a great place to go for the most amazing burgers and I also love Red Medicine. So those are just a few of the places that I like in LA.

All the meals I’ve had are the best. I’m a lucky guy. But I always really enjoy baby grilled eel!

Ok, what about the wildest dish you’ve ever eaten?

The wildest dish I’ve ever eaten were the razor clams I caught in the north of Spain in Galicia. I grabbed the clam, wrapped in seaweed and just ate it raw like a seaweed razor clam taco. This was probably the wildest because it was so pure. It was like being a part of nature and the ocean. I ate that while still in the water. I never felt more like an animal in my life and yet human at the same time. It was kind of a strange thing.

How do you discover the food scene when you’re somewhere new?

When I travel I love to try at least 10 restaurants a day. I get in a mood to try everything so I do my best to try a little something from everywhere. I love trying places that may not be in all the guides but that are astonishing.

What is the best food souvenir you’ve ever brought home from a trip?

I am a very good citizen and I comply with the rules of the TSA and I never bring food from abroad! Ho ho ho…Seriously though. I have Global Entry, which is this amazing program that allows me to get cleared through customs faster. Everyone should do this especially if you travel a lot! 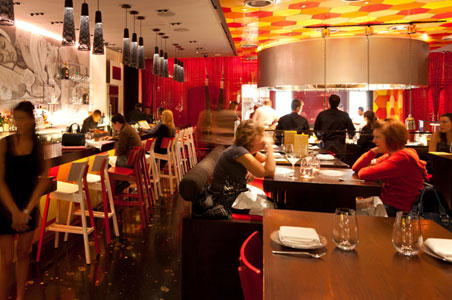 What drew you to open in Las Vegas? What do you like best about Sin City?

Vegas is like Oz, and I went to see the wizard. I became part of that story with Jaleo, China Poblano, and é by José Andrés at the Cosmopolitan. I think more and more Las Vegas is becoming a really important food city and it’s also a destination so as a chef, I want to make sure my guests have an unforgettable experience. Jaleo is a place that is very close to my heart. We opened the first one in DC almost 20 years ago and when we had the opportunity to open in Vegas we knew we had to go bold. So this is what inspired me to have the wood fire paella grill and only in Vegas do I think this was possible. It’s part of the experience. Guests love watching the open flame, the paella pans, and the cooks. It’s very fascinating. Inside Jaleo is é by José Andrés that serves a tasting menu that is always evolving because I think in Vegas people want to find something very special and exclusive so é is the perfect place for that. It is a culinary journey where I want my guests to explore. It’s a unique show on the Strip.

And of course ChIna Poblano, my restaurant that brings together Mexico and China just like the Spanish gallon trading ships of King Phillip II did hundreds of years ago. It tells this interesting story and serves traditional Chinese and Mexican food side by side.

So I think there is lots to see on the Strip but at the same time I would recommend that people go out and see what else Vegas has to offer. The Strip is wonderful but there is so much beyond it. There are wonderful restaurants like Lotus of Siam which is amazing.

What’s one thing you never travel without?

I never travel without my iPad! This way I can watch my latest shows and movies. Right now I love Homeland.

Do you have any upcoming trips you’re excited about?

I was recently in beautiful Puerto Rico where I opened a restaurant called Mi Casa at Dorado Beach, a Ritz-Carlton Reserve—it is the first reserve in the Americas and the second in the world so it will be extra special.

Also every year in January I go to the Food & Wine Cayman cookout in the Cayman Islands. I love escaping there in the dead of winter where I get to catch up with my friends Tony Bourdain and Eric Ripert. Best of all I love to scuba dive there.

But the trip that I am most excited about is my upcoming trip to Spain in April 2013 with the first students of the Spanish Studies program of the International Culinary Center, where I was recently named Dean. This has been like a dream come true because I have always been very interested in education. I created the curriculum with my friend Colman Andrews who is an expert in Catalan cuisine. As part of the program, I will be taking the students on a trip to Spain and showing them the best of Spanish cuisine and culture. So we will be visiting the artisanal markets, the best butchers, vineyards, cheesemakers, and tapas bar and so much more that I have planned. I am very excited about this.