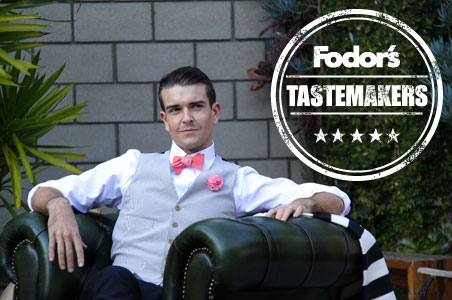 Photographer Gray Malin lives an enviable life, really. For example, his latest photo series, A la Plage, A la Piscine, has seen him traversing the globe in search of the most beautiful beaches and pools from St. Tropez to Brazil, which he then shoots from a helicopter above. As you do.

As such, we chose Gray as our second Travel Tastemaker for the fact that he brings international destinations into the homes and onto the walls of his fans, of which there are many. More than that, he shows us an entirely new perspective (literally) on these beaches. We see the stunning symmetry of some, the colorful chaos of others. And he does it all in high style. His past series have taken him to Marfa, Texas where he shot stark black and white photos of the desert Prada store, as well as to the streets of Los Angeles, New York City, and Paris for his Timeless Pursuit collection.

Without further ado, our second Tastemaker gives us the back story on some of our favorite beach shots—as well as his picks on where to stay in his favorite destinations! (Hint: Click on each image to see a larger version) 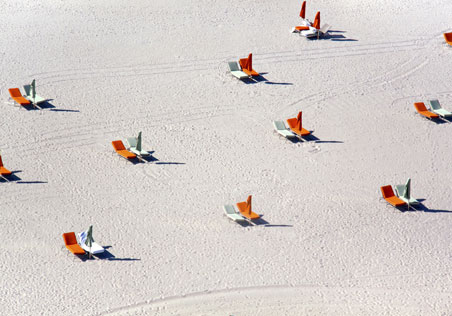 Miami was the first location I shot in the series from a helicopter. En route to South Beach from the airport in the helicopter light showers swept through the area, causing everyone to run off the beach just minutes before we got there. At first I was completely disappointed but in hindsight, it gave way to many empty, colorful chairs on the beach which I was able to find beauty in. 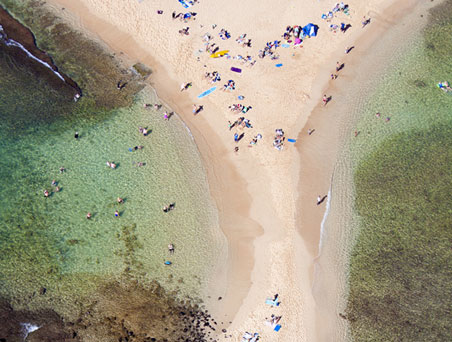 This is one of my favorite beaches in America. Poipu is on the island of Kauai and is known as one of the best snorkeling beaches on the island. When I decided to photograph it, I didn’t realize that the shape of the beach would be so beautiful from above—I even remember looking down from my seat in the helicopter and thinking how lucky I was to get to see this stunning beach from above. I am so happy I have been able to share it. 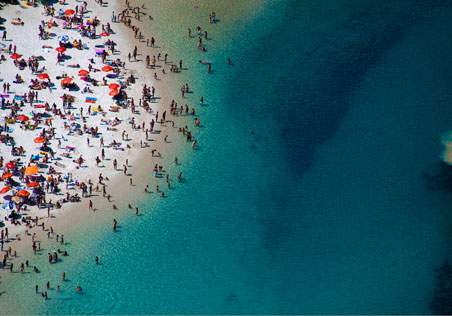 This beach was a total surprise! We flew 20 minutes south of Rio’s main beaches, like Ipanema and Copacabana to Barra de Tijuca and this little gem was snuggled in all by its lonesome near Rio’s largest favela which rested high on the sloping cliffs. 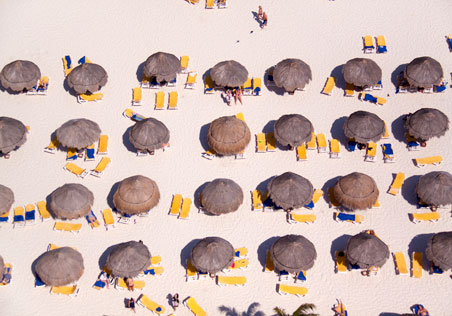 I will never forget shooting in the Caribbean because of how low the pilot was flying. We couldn’t communicate very well because of a language barrier, but I am pretty sure there are no flying restrictions what-so-ever in that area! 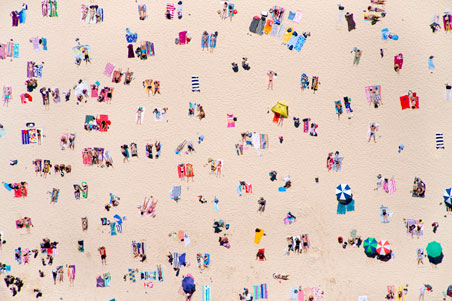 This is one of my favorite images from the whole series. I shot this one at 150mph looking directly down on Bondi Beach. The wind was swaying the helicopter and my camera was shaking but I saw the image, leaned out, and snapped the shot at 1/5000 of a second. Also, it cracks me up that no one in Sydney uses umbrellas on the beach—they have some of the strongest sun in the world! 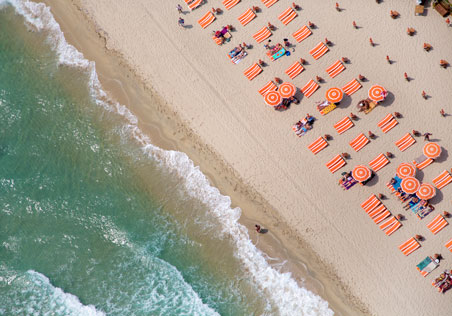 I had never been to St. Tropez before but I had seen many photographs of the orange umbrellas of the famous Tahiti Club and just had to capture it. On the other hand, the hardest part of shooting down Pampelonne Beach was that the beach clubs are staggered directly next to each other and they aren’t very wide, plus they each are unique because of the color of the beach umbrellas they display. Therefore, I had to shoot very tightly to keep all the umbrellas the same color in each image. 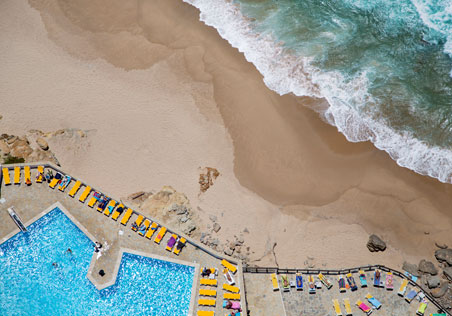 Lisbon was a real gem to shoot and caught me off guard. My helicopter pilot actually told me about this swimming pool and it was the very last shot I took during that shoot. Personally, I love photographing swimming pools next to the ocean because I think it says a lot about humanity. There is no doubt Lisbon is an understated beach town in the world of famous beaches.

Kauai: I recommend staying at the Koa Kea which is right next to Poipu Beach!

Lisbon: I couldn’t have asked for a more amazing hotel right on the beach: The Albatroz. The serve you complimentary port wine every night in your room which was a really nice touch.

The Hamptons: The Maidstone Inn is incredible. That’s all.

Sydney: The Diamant Hotel is a sleek, modern boutique city hotel with a fabulous staff.

All photos courtesy of Gray Malin