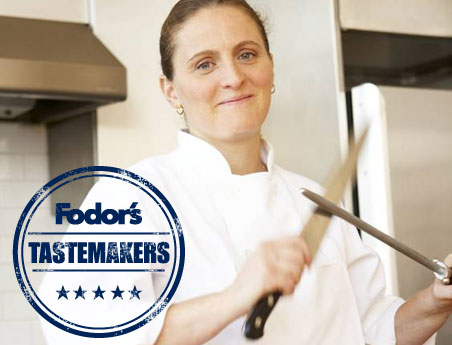 Let’s play a word association game. April Bloomfield: bold, amazingly-jaw-droppingly-indulgent-burger, supreme talent, cool-meets-cozy, British, and food-and-travel authority. Back in 2004, Bloomfield opened New York’s venerable cozy gastro-den The Spotted Pig (where you’ll find that burger) along with restaurateur Ken Friedman. Together, they’ve since opened The Breslin Bar & Dining Room and the John Dory Oyster Bar, which are both inside New York’s Ace Hotel. And in April of this year, Bloomfield published her first cookbook, A Girl and Her Pig.

One of the things we find inspiring about Bloomfield is the simple fact that, with no hesitation whatsoever, she encourages us to dine on foods we would not have otherwise considered. What’s more, she’s insatiable herself—here, she posted videos from stops on her book tour where she’d talk with farmers, restaurateurs, and chefs along the way. Despite being honored with all sorts of titles and awards (including, ahem, Fodor’s Travel Tastemaker), she’s really just interested in all the foods there are to find and try around the world.

What city in the US do you think has the most cutting edge food scene right now?

Chicago has a great food scene right now. They have amazing neighborhoods with strong local restaurant scenes and a good mix of fine dining and casual places to eat. Along the way, I met chefs that grind their wheat to make flour, make their own charcuterie, and pickle their own produce. There are also great and innovative cocktail bars, like the Aviary.

What’s the best meal you’ve ever had while traveling?

It was a place in Essaouira, Morocco. We bumped into this man named Ibrahim and we sat around drinking mint tea as he showed us pictures of tourists he’s met as well as his friends. He invited us to meet him the next day to show us around Essaouira. When we met up with him, he took us along to the markets where we picked up some chicken, spices, and preserved lemons. Ibrahim then took us to this place where only locals go. You give them all of your ingredients and they make a tagine for you. It took about an hour so we sat and talked while we waited for our food. It was such an amazing experience to sit with a local, learn about the culture, and eat the most amazing food. Even though we were a bit apprehensive to meet up with Ibrahim, it ended up being one of the most amazing experiences that I’m very glad I didn’t miss out on.

What was your favorite stop on you’re A Girl and Her Pig book tour?

I really liked all of the stops on the tour. Each city I visited was very unique. I don’t think I can say if I liked one place more than the other. They were all amazing! 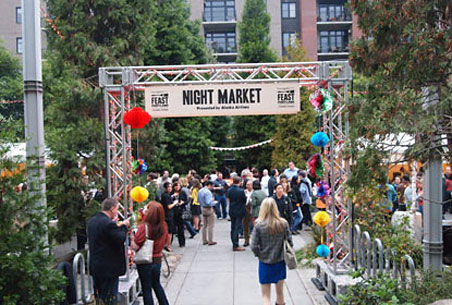 Where have you recently been that you’re most excited about?

I just went back to Portland for Feast Portland, which I was really excited about. I was really happy to visit all the great Portland restaurants that I didn’t have a chance to go to during my book tour for A Girl and Her Pig. I also just got back from LA, where I attended the Alex’s Lemonade Stand charity event, which was great.

Where are some of your favorite NYC restaurants and bars?

I really enjoy The Smile for lunch, especially on a rainy day because it’s very cozy inside. McSorley’s is a great bar to go to if friends are in town. Waterfront Ale House is also a good spot to have a drink.

Any plans to expand to other cities? If so, where would you go first?

That’s a tough decision. It would be a toss-up between San Francisco and London, then Montreal.

What foodstuff would you always pull over for on a road trip?

If it is a local market or like a local farm, I would stop for…anything really. Cherries, eggs, bread, things like that. I love buying locally grown food.

I would probably check out a local bar, grab a drink, relax, and plan where I might go next.

Twix, especially if I’m in a foreign country and I want a bit of chocolate. I also always bring my Bose head phones, my phone, and my iPad.