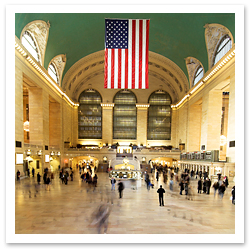 Grand Central Terminal
Grand Central is not only the world’s largest railway station (76 acres) and the nation’s busiest (500,000 commuters and subway riders use it daily), it’s also one of the world’s greatest public spaces, “justly famous,” as critic Tony Hiss has said, “as a crossroads, a noble building and an ingenious piece of engineering.” A massive four-year renovation completed in October 1998 restored the 1913 landmark to its original splendor — and then some.

Empire State Building
It’s no longer the world’s tallest building (it currently ranks seventh), but it’s one of the world’s most recognizable landmarks, and still worth a visit. Its pencil-slim silhouette is an art-deco monument to progress, a symbol for New York City, and a star in some great romantic scenes, on- and off-screen.

New York Public Library
This 1911 masterpiece of beaux-arts design is one of the great research institutions in the world, with 6 million books, 12 million manuscripts, and 2.8 million pictures. But you don’t have to crack a book to make it worth visiting: both inside and out, this stunning building, a National Historic Landmark, will take your breath away with its opulence. 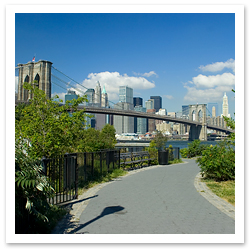 Brooklyn Heights Promenade, Brooklyn
Stretching from Cranberry Street on the north to Remsen Street on the south, this 1/3-mi-long esplanade provides enthralling views of Manhattan. Find a bench and take in the view of the skyline, the Statue of Liberty, Ellis Island, and the Brooklyn Bridge. The small island to your left is Governors Island, part of which is now a national park.

Cathedral Church of St. John the Divine
Everything about the cathedral is colossal, from its cavernous 601-foot-long nave, which can hold some 5,000 worshippers, to its 162-foot-tall dome crossing to its Great Rose Window, the largest stained-glass window in the United States. Even though this divine behemoth is unfinished — the transepts and tower are the most noticeably uncompleted elements — it is already the largest Gothic cathedral in the world.

Metropolitan Museum of Art
One of the world’s greatest museums, the Met is also the largest art museum in the western hemisphere — spanning four blocks and encompassing 2 million square feet. Its permanent collection of nearly 3 million works of art from all over the world includes objects from the Paleolithic era to modern times. 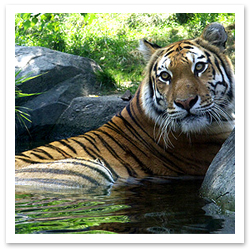 The Bronx Zoo, The Bronx
When it opened its gates in 1899, 843 animals were exhibited in small cages and enclosures. Today, this 265-acre zoo is the world’s largest. More than 4,500 animals, representing more than 600 species, mostly live in outdoor settings designed to re-create their habitats. You’re often separated from them by no more than a moat. One of the zoo’s best exhibits is the Congo Gorilla Forest ($3), a 6.5-acre re-creation of an African rain forest with treetop lookouts, wooded pathways, lush greenery, and 300 animals.

Solomon R. Guggenheim Museum
The Guggenheim, the brain child of architect Frank Lloyd Wright, is an icon of modernist architecture, designed specifically to showcase and complement modern art. Outside the curvaceous building, Wright’s attention to detail is strikingly evident — in the porthole-like windows on its south side, the circular pattern of the sidewalk, and the smoothness of the hand-plastered concrete. At the moment, the building’s exterior is getting a much-needed beautification, so expect to see lots of scaffolding and ladders. 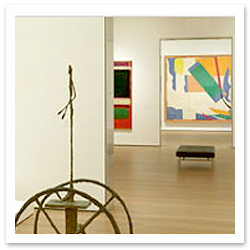 Museum of Modern Art (MoMA)
A “modernist dream world” is how critics described the museum after its $425 million facelift. Yoshio Taniguchi, the Japanese architect responsible for the six-story structure, said he wanted to “create an environment rather than simply making a building.” The massive project nearly doubled the museum’s square footage, adding soaring galleries suffused with natural light. The new entrance (accessed from either 53rd or 54th St.) is a 150-foot atrium that leads to the movie theater, cafés, and restaurant.

Museum of Television & Radio
Three galleries of photographs and artifacts document the history of broadcasting in this 1989 limestone building by Philip Johnson and John Burgee. But the main draw here is the computerized catalog of more than 100,000 television and radio programs. If you want to see a performance of “Turkey Lurkey Time” from the 1969 Tony Awards, for example, simply type in the name of the song, show, or performer into a computer terminal. You can then proceed to a private screening area to watch your selection.