Hotel Plaza Athénée, Upper East Side
All rooms at this elegant property have ample space. Even the most modest rooms have sitting areas with inviting sofas, and generous closet space. Handsomely furnished suites come with dining tables or dining rooms, and 12 suites have balconies. Rooms above the 12th floor have over-the-rooftop views. Ask about weekend packages. $$$$ (photo, right)

Larchmont Hotel, Greenwich Village
You might miss the entrance to this beaux-arts town house on West 11th Street. If you don’t mind shared bathrooms and no room service, the residential-style accommodations are all anyone could ask for, for the price. The small rooms have a tasteful safari theme; your own private sink and well-stocked bookshelf will make you feel right at home. Guests have use of a communal kitchen and a Continental breakfast is included. $ 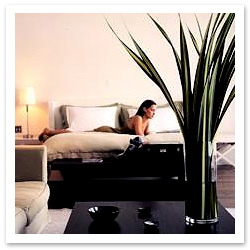 Mercer Hotel, Soho
Owner André Balazs, known for his Château Marmont in Hollywood, has a knack for channeling a neighborhood sensibility. Here, it’s Soho loft all the way. In the hushed lobby, the reception desk is unmarked. Guest rooms have long entryways, high ceilings, and walk-in closets. Dark woods and custom-designed furniture upholstered in muted solids lend serenity. The bathrooms steal the show with their decadent two-person marble tubs. But beware: not all rooms come with a tub. $$$ (photo, right)

The Lowell, Upper East Side
This old-money refuge was built as an upscale apartment hotel in the 1920s. Guest rooms have all the civilized comforts of home, including stocked bookshelves and luxurious bathrooms. Thirty-three of the suites have working fireplaces, and 11 have private terraces. A gym suite has its own fitness center, and a garden suite has two beautifully planted terraces. Most of the rooms have been redecorated in a more modern, streamlined style with less chintz and no patterns. $$$

Howard Johnson’s Express Inn, Lower East Side
This hotel at the nexus of East Village and Lower East Side nightlife is perfect if you want to check out the downtown scene. The tastefully done rooms each have enough space for a desk; a few have hot tubs or microwaves and mini-refrigerators. With amenities such as in-room hair dryers, irons, coffeemakers, and voice mail, plus free local calls, you’re getting more than your money’s worth in New York’s hotel market. $ 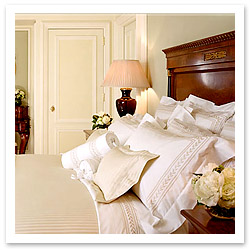 Ritz-Carlton New York, Central Park South
The former St. Moritz hotel is one of the top properties in the city. No request is too difficult for the superlative Ritz staff. Quietly elegant rooms and suites are sumptuous without feeling stiff or stuffy, with high thread-count sheets and plush fabrics throughout. Exceptional French cuisine is served at jewel-box Atelier restaurant, and the La Prairie salon is a pampering treat. $$$$ (photo, right)