St. James’s Park, St. James’s
With three palaces at its borders this most royal of London parks is the city’s oldest and smallest park. Head to the bridge spanning the park’s lake for fantastic views of Buckingham Palace.

Westminster Abbey, Westminster
The scene of 14 royal weddings and no less than 38 coronations, the abbey is one of the city’s most iconic sites.

Hampton Court Palace, Richmond
This collection of buildings and gardens won over Henry VIII to become his favorite royal residence. 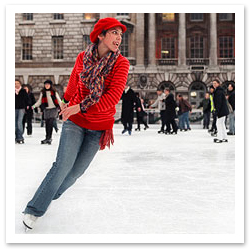 Somerset House, Covent Garden
It’s hard to beat the skating experience at Somerset House, where during December and January a rink is set up in the spectacularly grand courtyard of this central London palace. (photo, right)

Apsley House, Mayfair
To the victor go the spoils. At least it certainly seems so judging by the elegance of the Duke of Wellington’s palatial residence.

Tower Bridge, The City
Join the tour inside the bridge’s building to see how the famous bridge actually works plus fantastic views on the outside.

Shakespeare’s Globe Theatre, South Bank
If Shakespeare’s works leave you wondering why exactly the play is the thing, then a trip to the Globe–to learn more about his life or to see his words come alive–is a must. 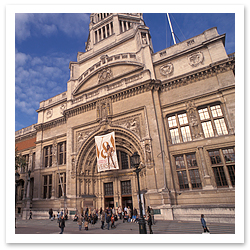 Victoria & Albert Museum, South Kensington
Sketch in the sculpture court, where even stools are provided–then have a glass of wine under the Chihuly character. (photo, right)

Buckingham Palace, St. James’s
Not the prettiest royal palace, but a must-see for the glimpse it affords of modern royal life. The opulence of the state rooms open to the public provides plenty to gasp at.

National Gallery, Westminster
Whatever the collective noun is for a set of Old Masters—A palette? A canvas?—there are enough here to have the most casual art enthusiast purring with admiration.

St. Paul’s Cathedral, The City
Climb the enormous dome, third largest in the world, to experience the freaky acoustics of the Whispering Gallery, and higher still for fantastic views across London.

Tate Modern, South Bank
More of an event than the average museum visit, this riverside museum, housed inside a striking 1930s power station, is a hip, immensely successful addition to the London gallery landscape. 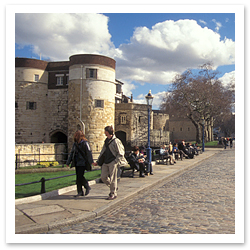 The Tower of London, The City
With foundations dating back nine centuries, every brick of this historic complex tells a story. (photo, right)

Science Museum, South Kensington
Sure, it’s educational—but this museum manages to keep kids interested. For a special treat catch a flick at the 450-seat IMAX theatre.

Hampstead Heath
For an escape from the ordered prettiness of Hamptonstead, head to the heath–a wild park where wolves once roamed and washerwoman laundered clothes for aristocrats–which spreads for miles to the north.