The Portobello, Notting Hill
One of London’s most famous hotels, the little Portobello is seriously hip, attracting as many celebrities as ordinary folk, and garnering a stellar reputation in the process.

Arosfa Hotel, Bloomsbury
The friendly owners set this B&B apart from the Gower Street hotel pack—that, and the fact that this was once the home of pre-Raphaelite painter Sir John Everett Millais. 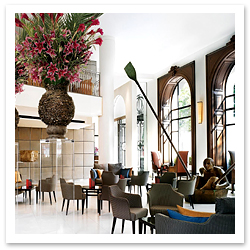 St. Margaret’s, Bloomsbury
A popular hotel near the British Museum and on a street full of budget hotels, St. Margaret’s has well-lighted rooms with high ceilings in a Georgian-era building.

Covent Garden Hotel, Covent Garden
In the midst of boisterous Covent Garden, this hotel is now the London home-away-from-home for a mélange of off-duty celebrities, actors, and style mavens. 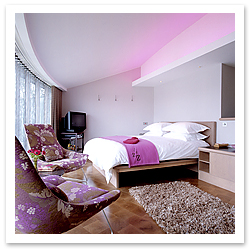 Zetter Rooms, Holborn
The dizzying five-story atrium, art deco staircase, and slick restaurant are your first indications of what to expect at this converted warehouse: a breath of fresh air (and a little space) in London’s mostly Victorian hotel scene. (photo, right)

Soho Hotel, Soho
This redbrick, loftlike building opened its doors in 2004, making it the first upscale hotel in gritty Soho.

Premier Travel Inn County Hall, South Bank
There’s nothing fancy about this cookie cutter chain hotel, but for families on a budget the rates are just right. Most rooms have foldout beds that can accommodate up to two kids at no extra charge.