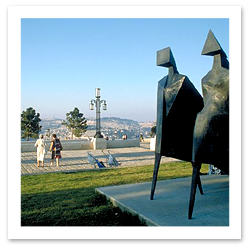 Israel Museum, Jerusalem
Make sure to put this eclectic treasure trove on your don’t-miss list. You won’t be able to see everything, but if time is limited a quick-hits tour should include the Dead Sea Scrolls, the open-air Billy Rose Sculpture Garden (with landscape architecture by Isamu Noguchi), and the Cummings 20th-Century Art Building, which houses works by Picasso, Cézanne, Chagall, Dubuffet, and Mark Rothko, among many others.

Hezekiah’s Tunnel, Jerusalem
Wading through a 2,700-year-old tunnel that once supplied water to the city is a great adventure for those who like a little exercise with their history. A short flight of steps and a tunnel take you down through a cavernous structure that once guarded the Gihon Spring, the original water supply of ancient Jerusalem. Hezekiah’s Tunnel, also known as the Siloam Tunnel, was cut through the hill to secure the city’s water supply in the face of Assyrian invasion in 701 B.C.

Machaneh Yehuda, Jerusalem
Off Jaffa Road, near the commercial Clal Center, is the Machaneh Yehuda produce market, a block-long alleyway that becomes a blur of brilliant primary colors as the city’s best-quality fruit and vegetables, pickles and cheeses, and confections await inspection. The busiest days are Thursday and Friday. 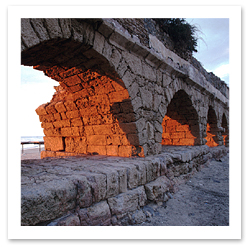 Caesarea, Haifa and Northern Coast
By turns ancient Roman port city, Byzantine capital, and Crusader stronghold, Caesarea marks the northern tip of the Sharon Plain. Chock-full of ruins, it’s a fascinating place to spend a day of leisurely sightseeing. Stretched out over 3 km (2 miles) are a Roman theater; a Crusader city (containing remnants of a Crusader cathedral); Roman-Byzantine remains that include a mosaic-tiled bathhouse; an amphitheatre where thousands of spectators watched chariot races thousands of years ago; and the vestiges of an ancient aqueduct. 16 km (10 miles) north of Netanya, 49 km (29.5) miles south of Haifa.

Masada, Dead Sea Region
From this stronghold — an isolated flattop rock — King Herod and 1,000 Jewish rebels undertook the Great Revolt against Rome. Visitors usually take the cable car up Masada, but you can also take the western Roman Ramp path to the top. (It is imperative to drink lots of water and wear a hat.) Visible from the upper terrace is the Ein Gedi oasis, 16 km (10 miles) to the north, from which the Romans had to haul their water. There’s much to see on Masada, including the bathhouse, where elaborate frescoes and floor tiles speak to Herodian opulence; a small 5th-century Byzantine Church, with mosaic floor and walls designs; and the Western Palace, the largest structure on Masada and the original administrative center. The new visitor center offers a short movie, a model of Masada, some of the discovered artifacts, a photo gallery, and a store. 19 km (12 miles) south of Ein Gedi on Rte 90, 103 km (64 miles) east and south of Jerusalem. 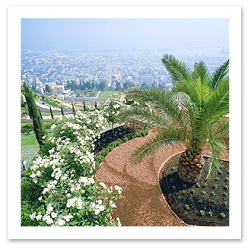 Baha’i Shrine and Gardens, Haifa
The most striking feature of the stunning gardens that form the centerpiece of Haifa is the Shrine of the Bab, whose brilliantly gilded dome dominates as well as illuminates the city’s skyline. The gardens are a sight to behold—18 stunningly landscaped circular terraces extend from Yefe Nof Street for half a mile down the hillside to Ben Gurion Boulevard. The terraces are a harmony of color and form—pale pink and gray stone staircases and carved urns overflowing with red geraniums. Three areas are open to the public year-round: the Shrine and surrounding gardens, and the upper terrace and observation point. You can visit the gardens only as part of a guided tour, which take place daily, but you must reserve (by phone) your place on the tour at least three days in advance. Times change frequently; check the website. Entrance to the shrine is at 65 Sderot Hatziyonut, Merkaz Carmel. 04/835-8358, 04/831-3131 for garden tour. www.bahai.org.

Mt. Gilboa, Lower Galilee
Mt. Gilboa is geographically a spur of the far greater Samaria Range to the southwest. Half the mountain has been reforested with evergreens, while the other half has been left in pristine rockiness. Environmentalists prefer the latter, as it protects the profuse wildflowers that splatter the slopes with color every March and April. From the gravel parking area off Route 667, well-marked trails wind through the natural habitat of the rare black iris, which draws hordes of Israelis every spring. The views of the valley below and the hills of Galilee beyond are great year-round, but on a clear winter or spring day they’re amazing. Afternoon is the best time to come. 24 kilometers southeast of Megiddo via Routes 675 and 667. 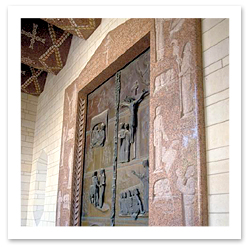 Nazareth, Lower Galilee
The Nazareth where Jesus grew up was an insignificant village nestled in a hollow in the Galilean hills. Today’s city of 70,000 has burst out of the hollow with almost frenetic energy. It’s a bemusing and dissonant experience for the Christian pilgrim who seeks the spiritual Nazareth among the horn-blowing cars, vendors, and occasional donkeys. Wednesday is somewhat more calm, as businesses close for a mid-week sabbatical. Sunday is a day of rest for Christians, so the town is quite placid. If it’s local color you seek, come on Saturday, when Arab country folk come to town to sell produce and buy goods and Jewish families hunt for bargains in the souk. 25 km (15.5 mi) east of Bet She’arim, 56 km (35 mi) east of Haifa.

Makhtesh Ramon, the Negev
The Roman Crater is Israel’s most spectacular natural sight. An immense depression, it’s 25 miles long, six miles wide, and its deepest point is 2,400 feet. Mitzpe Ramon is a tiny town on the edge of the crater. The populace numbers 5,500 people. It’s whole reason for being is the magnificent crater, and visitors love the area because of its serenity, pure refreshing air, and natural beauty. The local main road runs through the crater, a promenade winds along its edge, and a huge sculpture park sits on its rim. Do leave time for the visitor center, at the edge of Makhtesh. The center offers a full-color, sound-and-screen presentation with a walk-around model of makhtesh (it outshines the 12-minute film shown in the auditorium). On main road in Mitzpe Ramon. 08/658-8755. Sun.-Thurs. 8-5, Fri. 8-4, Sat. 8-5.

Avdat, Negev
The Nabatean city of Avdat, a 12-acre acropolis, looms on a hilltop. Here you can see the ancient stronghold and urban ruins of three peoples who have left their mark all over the Negev: the Nabateans, the Romans, and the Byzantines. Start at the visitor center (the Avdat Data Shop), where you can learn about the Nabateans in a 10-minute video, see examples of what these ancient traders actually transported across the desert, and examine archaeological artifacts found in the excavations. Using Nature and National Parks Authority’s map, you can trace the lifestyle of these former locals at sites that include a reconstructed three-story Roman tower; a rare Nabatean pottery workshop; a winepress; cisterns; two Byzantine churches; and a large baptismal font. Rte 40. 08/658-6391. www.parks.org.il.