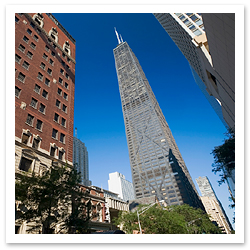 John Hancock Center
This multi-use skyscraper is distinguished by its tapering shape and the enormous X braces, which help stabilize its 100 stories. Soon after it went up, in 1970, this building earned the nickname “Big John.” No wonder: at 1,127 feet (1,502 feet counting the antennae at the top), 2.8 million square feet, and 46,000 tons o’ steel, there’s nothing little about it. Impressive from any angle, it offers mind-boggling views from a 94th floor observatory. 875 North Michigan Avenue. 312/751-3681.

860-880 North Lake Shore Drive
These twin apartment towers overlooking Lake Michigan were an early and eloquent realization of Mies van der Rohe’s “less is more” credo. I-beams running up the facade underscore the building’s vertical axis, while mechanical systems inside are housed in the center so as to leave the rest of each floor free and open to spectacular views. Completed in 1951, the buildings were built in the famed International Style, which played a key role in transforming the look of American cities. 860-880 North Lake Shore Drive. 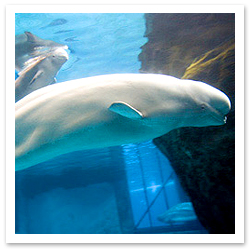 John G. Shedd Aquarium
Take a plunge into an underwater world at the world’s largest indoor aquarium. Built in 1930, the Shedd houses more than 8,000 aquatic animals. “Amazon Rising” takes you on a journey along the banks of the Amazon River with an up-close look at many animals, including piranhas, snakes, and stingrays. See sharks in “demons of the deep” and stare down beluga whales and dolphins in their natural habitats. 1200 South Lake Drive. 312/939-2438.

Carson Pirie Scott & Co. Building
Old-fashioned department stores may be dying, but one of the most famous, built in 1899, remains open for business on State Street. The work of one of Chicago’s most renowned architects, the flagship of Carson Pirie Scott & Co. combines Louis H. Sullivan’s visionary expression of modern design with intricate cast-iron ornamentation. The eye-catching rotunda and the 11 stories above it are actually an addition Sullivan made to his original building. The chain plans to close its flagship location after the 2006 holiday season. 1 State Street, Loop. 312/641-7000.

Glessner House
This is one of the few great mansions left on Prairie Avenue, once home to such heavy hitters as retailer Marshall Field and meat-packing magnate Philip Armour. The area has seen the arrival of new, high-end construction, but nothing beats a tour of Glessner House, a remarkable relic of the days when merchant princes really lived like royalty. Enjoy the lavish interiors and the many artifacts, from silver pieces and art glass to antique ceramics and Isaac Scott carvings and furnishings. 1800 South Prairie Avenue. 312/326-1480. 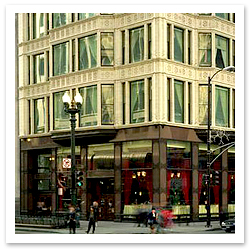 Reliance Building
The gleaming verticality that characterizes the modern skyscraper was first and most eloquently articulated in this steel-frame tower in the heart of the Loop. It was completed in 1895 and is now home to the stylish Hotel Burnham. Don’t miss the mosaic floor and ironwork in the reconstructed elevator lobby. 1 West Washington Street, Loop. 312/782-1111.

Robie House
Long and low, Robie House grabs the ground and sends the eye zipping westward. Massive overhangs shoot out from the low-pitched roof, and windows run along the facade in a glittering stretch. Inside, Wright’s “open plan” echoes the great outdoors, as one space flows into another, while sunlight streaming through the decorative leaded windows bathes the rooms in patterns. The house is undergoing renovation, but is open to the public. 5757 South Woodlawn Avenue. 773/834-1847.

Sears Tower
In Chicago, size matters. This soaring, 110-story skyscraper, designed in 1974, was the world’s tallest building until 1996 when the Petronas Towers in Kuala Lumpur, Malaysia, claimed the title. Enter on Jackson Boulevard to take the ear-popping ride to the 103rd-floor observatory. Video monitors turn the 70-second elevator ride into a fun-filled, thrilling trip. On a clear day, a whopping four states are visible: Illinois, Michigan, Wisconsin, and Indiana. 233 South Wacker Drive. 312/875-9696. 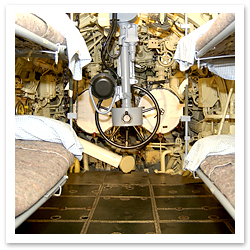 Museum of Science and Industry
This beloved museum is vast, and the variety of things to do is just as far-reaching. Constantly updating itself with new exhibits, the museum is a sprawling open space, with 2,000 exhibits on three floors. You can walk through the middle of a 20-foot-tall model of the human heart, explore a cantilevered Boeing 727, and make noises in the acoustically perfect Whispering Gallery, among many, many other things. 5700 South Lake Shore Drive. 773/684-1414.

The Rookery
This 11-story structure got its name from the pigeons and politicians who roosted at the city hall that once stood on this site. Designed in 1885 by Burnham & Root, who used both masonry and the more modern steel-frame construction, the Rookery was one of the first buildings in the country to feature a central court that brought sunlight into interior office spaces. Frank Lloyd Wright, who kept an office here for a short time, renovated the two-story lobby and light court, eliminating some of the ironwork and terra-cotta. 209 South LaSalle Street, Loop.