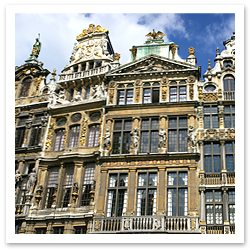 Grand Place, Brussels
A jewel box of a square. At night the burnished facades of the guild houses and their gilded statuary look especially dramatic. Try to be here for the Ommegang, a magnificent historical pageant re-creating Emperor Charles V’s reception in the city in 1549 (the first Tuesday and Thursday in July).

Musée des Instruments de Musique, Brussels
The Museum of Musical Instruments brings together a collection of more than 7,000 musical instruments, including a precious 1619 spinet-harpsichord, a rare Chedeville bagpipe, a rich selection of European folk instruments, as well as creations by the amazingly prolific Adolphe Sax, inventor of the saxophone. Montagne de la Cour Hofberg 2. 02/545-01-30. www.mim.fgov.be.

Groeningemuseum, Brugge
A crash course in the Flemish Primitives—expect to see works by Petrus Christus, Hugo Van der Goes, Hieronymous Bosch, Rogier van der Weyden, Pieter Bruegel, and the rest of the Flemish gang. This is where you can see Jan van Eyck’s wonderfully realistic Madonna with Canon Van Der Paele, in which van Eyck achieved texture and depth through multiple layers of oil and varnish. And if you’re a fan of Hans Memling, you can see one of his greatest works here, the Moreel Triptych. The museum also has a marvelous collection of 15th- to 21st-century Dutch and Belgian works. The museum is blessdly small, but its riches warrant a full morning or afternoon. Wear sensible shoes. Dijver 12. 050/44-87-11. Tues.-Sun. 9:30-5. 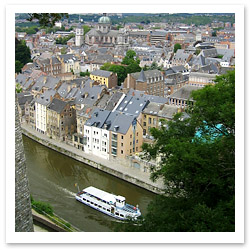 Citadelle, Namur
Over the past 1,000 years, this fortification overlooking Namur has been sieged and occupied more than 20 times. Today you can reach it by the cobblestone, cherry tree–lined route Merveilleuse; each curve in the road affords a magnificent view of the city (see right). From April through September, you can take a guided tour in English of the Citadelle. If you’d rather explore on your own, take a copy of the brochure “Storming the Citadel of Namur,” which describes five self-guided walks that you can take around the property. Your €6 ticket to the Citadelle gets you a 50-cent discount at the other on-site attractions, and it includes the train ride around the property. Within the Citadelle you’ll find the Château de Comtes, a museum devoted to Namur history. The Citadelle is open April–October, daily 11–6, and November–March, weekends 11–5.

Markt, Brugge
Although it’s been around since 958, this is still one of the liveliest places in Brugge. In the center stands a memorial to the city’s medieval heroes, Jan Breydel and Pieter De Coninck, who led the commoners of Flanders to their short-lived victory over the aristocrats of France. One the east side of the Markt are the provincial government house and post office. Old guild houses line the west and north sides of the square, their step-gabled facades overlooking the cafés spilling out onto the sidewalks. The buildings aren’t all as old as they seem—some are 19th-century reconstructions. The medieval Belfort on the south side of the Markt, however, is the genuine article. Intersection of Steenstraat, St-Amandstraat, Vlamingstraat, Philipstockstraat, Breidelstraat, and Wollestraat. 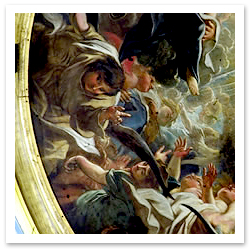 Onze-Lieve-Vrouwekathedraal, Antwerp
A miracle of soaring Gothic lightness, the Cathedral of Our Lady is Antwerp’s finest cathedral. Construction began in 1352 and was not completed until 1521. The cathedral contains some of Rubens’s greatest paintings as well as a great collection of 17th-century religious art, including four Rubens altarpieces. The panels of De Kruisafneming (The Descent from the Cross) triptych—Mary’s visit to Elizabeth (with the painter’s wife as Mary) and the presentation of Jesus in the temple—are among the most delicate and tender biblical scenes ever painted. Handschoenmarkt, Oude Stad. 03/213/-9940. www.dekathedraal.be.

Sint-Baakfskathedraal, Gent
St. Bavo’s Cathedral, begun in the 13th century but finished in the 16th in the ornate Brabantine Gothic style, dramatically rises from an unimposing entryway. It contains one of the greatest treasures in Christendom, The Adoration of the Mystic Lamb. Emperor Charles V was christened here more than 500 years ago. The cathedral was originally dedicated to St. John and it became the site for the veneration of St. Bavo, Gent’s own saint, after Charles V had the old Abbey of St. Bavo razed. The cathedral’s ornate pulpit, made of white Italian marble and black Danish oak, was carved in the 18th century by the sculptor Laurent Delvaux. Rubens’ masterpiece, Saint Bavo’s Entry into the Monastery, hangs in one of the chapels. Don’t miss the baroque-style organ built in 1623 and a crypt crammed with tapestries and frescoes. St-Baafsplein, Torenrij, Gent. Cathedral free. 09/269-2065.

Museum Mayer Van den Bergh, Antwerp
Mayer Van den Bergh was a passionate art connoisseur who amassed a private collection of almost 4,000 works in the 19th century. The collection includes treasures such as a life-size polychrome statue from about 1300 of St. John resting his head on Christ’s chest (room 6). Pieter Bruegel the Elder’s arguably greatest and most enigmatic painting, Dulle Griet, is the museum’s showstopper (room 9). Often referred to in English as “Mad Meg,” it portrays an irate woman wearing helmet and breastplate striding across a field strewn with the ravages and insanity of war. Lange Gasthuisstraat 19, Kruidtuin. http://museum.antwerpen.be/mayervandenbergh. 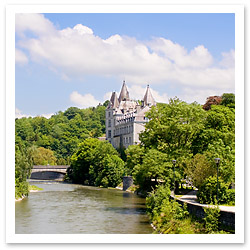 Durbuy, Liège Province
An 11th-century castle towers over this tiny, picture-perfect town, which is surrounded by deep forests of the Ourthe River Valley. Durbuy’s narrow streets, never more than a stone’s throw from the main square, are lined with amazingly well-preserved 16th- and 17th-century architecture. During the summer season they fill with tourists. Discover the region by driving through the lush forests surrounding Durbuy. Take N841 8 km (5 mi) southeast out of town to Weris (designated one of the “most beautiful villages of Wallonia”) with its half-timber houses and 11th-century church. Continue south on N841 to 807 east toward Soy, home to a small brewery. Farther along the 807 in Hotton, climb through caves lined with unusual calcium deposits. Follow N86 to Barvaux, a perfect place to swim in the Ourthe River, rent a boat, or play tennis or golf.

Vlaeykensgang, Antwerp
A quiet cobblestone lane in the center of Antwerp, the Vlaeykensgang seems untouched by time. The mood and style of the 16th century are perfectly preserved here. There is no better place to linger on a Monday night when the carillon concert is pealing from the cathedral. The alley ends in Pelgrimsstraat, where there is a great view of the cathedral spire. Jordaenshuis, nearby, was the home of Jacob Jordaens, the painter many saw as the successor of Rubens. Unfortunately, it’s no longer open to the public, but you can see the exterior. Reyndersstraat 6, Oude Stad.

Grottes de Han, Namur Province
These enormous caves, which provided refuge for threatened tribes since Neolithic times, were rediscovered in the mid-19th century. To tour them, board an ancient tram in the center of Han-sur-Lesse. The tram carries you to the mouth of the caves. There, multilingual guides take over, leading groups on foot through dimly lighted chambers. You get occasional glimpses of the underground river Lesse as you pass giant stalagmites and eventually enter the vast cavern called the Dome, 475 feet high. It gets chilly, so bring a sweater. www.grotte-de-han.be.