Beaches Kaila Yu Do You Enjoy Visiting Hawaii? You Should Pay a Fee
Home  >  News   >   Barcelona and Madrid Sights/Activities 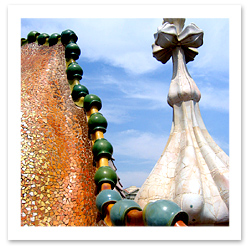 Manzana de la Discórdia, Barcelona
The houses here are spectacular and encompass three monuments of Modernisme — Casa Lleó Morera, Casa Amatller, and Casa Batlló. Gaudí at his most spectacular, the colorful and bizarre Casa Batlló (No. 43; photo, right), with its mottled facade resembling anything from an abstract pointillist painting to a rainbow of colored sprinkles on an ice cream cone, is usually easily identifiable by the crowd of tourists snapping photographs on the sidewalk.

Museu Picasso, Barcelona
The Picasso Museum is on Carrer Montcada, a street known for Barcelona’s most elegant medieval palaces, of which the museum occupies three. Picasso spent his key formative years in Barcelona (1895-1904), and this collection, while it does not include a significant number of the artist’s best paintings, is particularly strong on his early work.

Centro de Arte Reina Sofía, Madrid
Madrid’s museum of modern art is in a converted hospital, the classical granite austerity of which is somewhat relieved (or ruined, depending on your point of view) by the playful pair of glass elevator shafts on its facade. The collection focuses on Spain’s three great modern masters — Pablo Picasso, Salvador Dalí, and Joan Miró — and has contributions from Juan Gris, Jorge Oteiza, Pablo Gargallo, Julio Gonzalez, Eduardo Chillida, and Antoni Tapies. The museum’s showpiece is Picasso’s Guernica, in the center hall on the second floor. The huge black-and-white canvas depicts the horror of the Nazi Condor Legion’s bombing of the ancient Basque town of Gernika in 1937, during the Spanish civil war. The work—in tone and structure a 20th-century version of Goya’s The 3rd of May—is something of a national shrine. 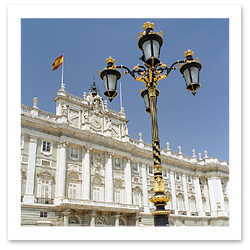 Palacio Real, Madrid
Inside the palatial Palacio Real (photo, right) 2,800 rooms compete with each other for over-the-top opulence. A nearly two-hour guided tour in English winds a mile-long path through the palace. Highlights include the Salón de Gasparini, King Carlos III’s private apartments, with swirling, inlaid floors and curlicued, stucco wall and ceiling decoration, all glistening in the light of a 2-ton crystal chandelier; the Salón del Trono, a grand throne room with the royal seats of King Juan Carlos and Queen Sofía; and the banquet hall, the palace’s largest room, which seats up to 140 people for state dinners.

Museo del Prado, Madrid
The Prado’s jewels are its works by the nation’s three great masters: Francisco Goya, Diego Velázquez, and El Greco. The museum also holds masterpieces by Flemish, Dutch, German, French, and Italian artists, collected when their lands were part of the Spanish Empire. The museum benefited greatly from the anticlerical laws of 1836, which forced monasteries, convents, and churches to forfeit many of their artworks for public display.

Museo Thyssen-Bornemisza, Madrid
The newest of Madrid’s three major art centers, the “Thyssen” occupies spacious galleries washed in salmon pink and filled with natural light in the late-18th-century Villahermosa Palace, finished in 1771. This ambitious collection of 800 paintings traces the history of Western art with examples from every important movement, from the 13th-century Italian Gothic through 20th-century American pop art. 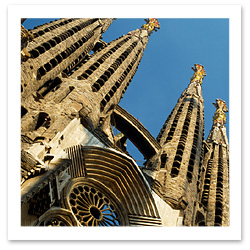 Temple Expiatori de la Sagrada Família, Barcelona
Barcelona’s most emblematic architectural icon, Antoni Gaudís Sagrada Família, is still under construction 123 years after it was begun. This striking and surreal creation was conceived as nothing short of a Bible in stone, a gigantic representation of the entire history of Christianity, and it continues to cause responses from surprise to consternation to wonder. No building in Barcelona and few in the world — Frank Gehry’s Guggenheim Bilbao might qualify in this category — are more deserving of investing anywhere from a few hours to the better part of a day in getting to know well. (photo, right)

Museu Nacional d’Art de Catalunya, Barcelona
Housed in the imposingly domed, towered, frescoed, and columned Palau Nacional, built in 1929 as the centerpiece of the World’s Fair, this superb museum was renovated in 1995 by Gae Aulenti, architect of the Musée d’Orsay in Paris. In 2004 the museum’s three collections — Romanesque, Gothic, and the Cambó Collection, an eclectic trove, including a Goya, donated by Francesc Cambó — were joined by the 19th- and 20th-century collection of Catalan impressionist and Moderniste painters.