Amsterdams Historisch Museum
Any city that began in the 13th century as a fishing village and eventually became the 17th century’s most powerful trading city has a fascinating story to tell, and this museum does it superbly. Although rich with art, models, and plain old treasures, the museum also employs a lot of state-of-the-art technologies: many will delight in the five different speaking doll houses that tell of daily life through the centuries. The curators have done an amazing job telling the history of the city in a lively and up-to-the-minute fashion. 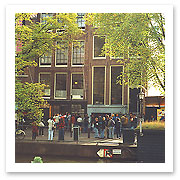 Anne Frankhuis
This is the house where Anne Frank and her family sought refuge from the Nazis for two years during World War II. The domicile is visited by more than 930,000 people each year. A recent expansion by Benthem Crouwel Architects has allowed the re-creation of the original house and provided space for more in-depth exhibitions, a bookstore, café, and offices for the employees of the Anne Frank Foundation. (photo, right)

Beginjhof
The richly scenic Beginjhof is the tree-filled courtyard of a residential hideaway, built in the 14th century for this lay Catholic sisterhood. Created as conventlike living quarters for unmarried or widowed laywomen, this hof, or almshouse, required them to follow three simple rules: no hens, no dogs, no men. One resident so loved this spot that she asked to be buried in the gutter here in 1654.

Brouwersgracht
One of the most photographed spots in town, this pretty, tree-lined canal at the northern border of the Jordaan district is bordered by residences and former warehouses of the brewers who traded here in the 17th century, when Amsterdam was the “warehouse of the world.” The canal is blessed with long views down the main canals and plenty of sunlight. Perfect for photo-ops.

Het Koninklijk Paleis te Amsterdam
From the outside it is hard to believe that this gray-stained building was once called the “Eighth Wonder of the World” when it was built in the 1600s. It’s had a long and remarkable history, its exterior having been worked over by more than a dozen well-known Dutch architects. For quite some time now it’s been the Royal Palace, but don’t expect to see much here as it’s closed for renovation until well into 2008. 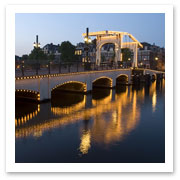 Magere Brug
Of Amsterdam’s 60-plus drawbridges, the Magere is the most famous. It was purportedly built in 1672 by two sisters living on opposite sides of the Amstel who wanted an efficient way of sharing that grandest of Dutch traditions: the gezellig (socially cozy) midmorning coffee break. Nowadays, it’s spectacularly lighted at night and often drawn up to let boats pass by. (photo, right)

Museum Amstelkring
What a surprise! With its elegant gray-and-white facade and spout gable, this appears to be just another ordinary canal house, and on the lower floors it is. The attic, however, contains something utterly unique: the only surviving schuilkerken (clandestine church) that dates from the Reformation in Amsterdam. The chapel itself is a triumph of Dutch classicist taste.

Museum het Rembrandthuis
One of Amsterdam’s more remarkable relics, this house was bought by Rembrandt for his family and is where he lived and worked between 1639 and 1658. Later, Rembrandt lost the house to bankruptcy when he fell from popularity after the death of Saskia, his wife. A recent expansion and restoration has brought the house close to its original form. You can see Rembrandt’s printing presses, his rarities collection, and fully stocked studio, among other things.

Nederlands Theatermuseum
Amsterdam has several Golden Age house museums, but few are as gilded as this one. The Bartolotti Huis (Nos. 170-172) is made up of two spectacular examples of 17th-century Dutch Renaissance houses built by Hendrick de Keyser. The rest of the museum resides in the equally delectable White House (No. 168), built in 1638. 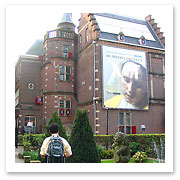 Rijksmuseum
The Rijksmuseum is home to many works by Rembrandt, Steen, Ruisdael, Brouwers, Hals, Hobbema, Cuyp, Van der Helst, and others of their Golden Age ilk. This national treasure, however, will be closed until summer 2008 for extensive renovation. Only the South Wing will remain reliably open. (photo, right)

Rijksmuseum Vincent Van Gogh
Although some of the Van Gogh paintings that are scattered throughout the world’s museums are of dubious provenance, this collection’s authenticity is indisputable: its roots trace directly back to brother Theo van Gogh, Vincent’s artistic and financial supporter. There are at least 200 paintings and 500 drawings on display.

Willet-Holthuysen Museum
Few patrician houses are open to the public along the Herengracht, so make a beeline to this mansion to see Grachtengordel (Canal Ring) luxury at its best. In 1895, the widow Sandrina Louisa Willet-Holthuysen donated the house and contents—which included her husband’s extensive art collection—to the city of Amsterdam. You can now wander through this 17th-century canal house and see its marvelously rich 18th-century interiors.