In 1936, Eugene Fodor published his first of many European guidebooks that would revolutionize travel. As part of our 75th anniversary celebrations, we honor the spy who loved travel and all things Fodor’s with our newly designed site, the Ultimate Fodorite, and a Czech-inspired party—plus a free download of the title that started it all: On the Continent.

The Spy Who Loved Travel

Born in 1905 and raised in Czechoslovakia, Eugene Fodor joined the U.S. Army’s psychological-warfare branch during World War II. He emerged a decorated war hero, thanks to his leadership in the liberation of Prague and Pilsen. 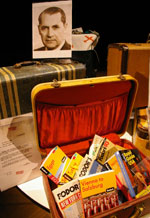 Multilingual and with extensive travel intelligence, Fodor began working for the CIA during the Cold War. His publishing career began in 1936 when Fodor created the first modern guidebook and many of his guidebook writers were undercover CIA agents. Fodor revolutionized the travel publishing industry, inspiring new generations to explore the world around them.

Look for travel tips on our site from guidebooks past, like this excerpt from New York City 1985: “New Yorkers . . . are ever wary of the jostler, the pickpocket, the hustler, the hit-and-run thief, the modern-day equivalent of the conman out to sell you the Brooklyn Bridge. The sophisticated traveler, of course, is ever ready for some version of the hustle—and not just on the disco dance floor. So do be careful.” 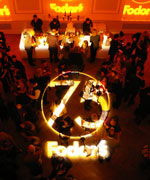 On March 21, Fodor’s celebrated their 75th Anniversary at Bohemian National Hall in New York’s Czech Center. Ultimate Fodorite Winner bobthenavigator and Publisher Tim Jarrell were joined by hundreds who love to travel. With imported Czech treats for all and a trip to Prague for one lucky jet-setter, the evening was inspired by Eugene Fodor’s ties to Eastern Europe (though we think he would have approved of the salsa dancing at the night’s end).

Be sure to check out our redesigned destination pages, like our Prague Travel Guide. For more on the Ultimate Fodorite, look for Bob’s Trip Report on the Forums with more details about his New York City adventure—it’s sure to be posted soon. 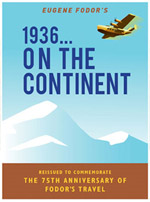 You can get a glimpse into Europe’s culture with Eugene Fodor’s first guidebook: 1936–On the Continent–The Entertaining Travel Annual. To celebrate our 75th anniversary, we’ve released this classic—published just three years before World War II—as a free eBook. Learn more.