Beaches Kaila Yu Do You Enjoy Visiting Hawaii? You Should Pay a Fee
Home  >  News   >   Fly-In Hiking Takes Off 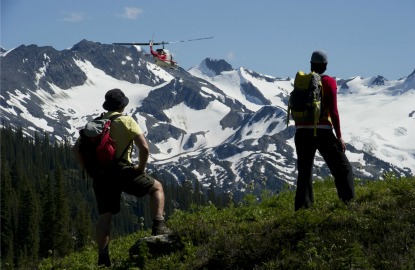 Heli-hiking, which essentially borrows from the heli-skiing concept—minus the skis or the snow—is quickly gaining ground as the latest bucket-list adventure trend. No surprise why: These flight-based excursions, via helicopter or small aircraft, enable hikers access to remote terrain that would normally require several days of serious trekking to reach—not to mention expert-level hiking skills. Plus, heli-hikers can enjoy nearly nonexistent crowds, and avoid having to lug in a tent or dine on freeze-dried camping meals.

Of course, such air-based excursions are pricier than their land-based counterparts. But for adrenaline-pumping adventure that comes with plenty of bragging rights, they’re well worth it. Here, a few spots where you can fly high on your next hiking trip.

Tracing back to a family-owned business that’s been flying in Alaska since the 1960s, tour operator Fly K2 is offering its second season of heli-hiking excursions. They bring guests by floatplane to the remote Alaskan wilderness of Denali National Forest, near the base of the 20,320-foot Mount McKinley, the highest peak in North America.

An approximately 30-minute jaunt from the quirky Alaskan outpost of Talkeetna brings passengers to Moraine Lake, which has been developed in recent years as an access base for two nearby glaciers. This pristine terrain is essentially inaccessible to all but the most intrepid hikers, and since excursions are limited to just six passengers, you’re all but guaranteed an isolated experience in the six million acres of Denali National Park’s rugged wilderness.

With two guides per six guests, on-the-ground excursions are customizable depending on clients’ skill levels and interests, says longtime K2 employee Garett Lawrence. "You can take as strenuous or as easy hike as you like," he says. "You can hike up the side of the mountain, or stroll along the water’s edge."

Flights are offered approximately three times a day, and the trip lasts four to five hours from takeoff to landing in Talkeetna. At the end of the hike, share your experience with fellow hikers over local fare such as caribou sausage and smoked salmon, plus cheese and crackers, and a glass of wine. Rates are $505 per person, including the national park entrance fee; guests should check out the company’s recommended gear list beforehand.

The late founder of Canadian Mountain Holidays, Hans Gmoser, is known as the pioneer of both heli-skiing and heli-hiking. The Austria-born Gmoser realized the potential of mountain lodges when they weren’t being used for skiing; three decades later, heli-hiking is one of the main summertime activities in Western Canada.

CMH specializes in creating customized heli-hiking adventures that range from the easy (yoga-themed or family-friendly hikes) to the strenuous (navigating Canada’s Via Ferrata, a vertigo-inducing mountain route fixed with cables, ladders, and bridges). Guests are transported with a Bell 212 14-person helicopter to upscale fly-in lodges in Western Canada, returning after a full day of hiking to massages, cocktails, and gourmet meals. Rates vary depending on the season and type of trip, but start at $1,780 per person for a three-night excursion.

Another prominent Canadian heli-hiking operator is Adventure Canada, which is offering an eight-day excursion from July 20–28 that starts off with a helicopter ride over the Torngat National Park. Lead by longtime wilderness guide Mike Beedell, guests are dropped off in the Torngat Mountains, Canada’s newest national park, and hike nearly 40 miles through bear country (Beedell is an experienced bear guide, too) and into the heartland of the indigenous Intuit people. The trip, which is recommended for advance-level hikers, costs $4,995 and requires a minimum of six participants.

Located near New Zealand‘s pristine Tongariro National Park, the acclaimed Tongariro Lodge is popular among fishing enthusiasts, but boasts plenty of other adventure-minded excursions, including helicopter walking tours to private land in the nearby Kaimanawa Ranges.

Helicopters pick up guests at the upscale lodge, and an experienced guide leads a trek through the majestic wilderness south of the Taupo region. Fishing junkies can also arrange for private helicopter tours to remote rivers that are visited only a few times per year.

Lodge accommodations start around $620 per night, based on double occupancy, including breakfast and a four-course dinner, while heli-hiking excursions cost approximately $280 per person for a full day, including guides, concessions, and lunch. (Tip: To celebrate its 30th anniversary, the lodge is also offering two discounted packages through May 2012.)