News Christina Mueller Yes, You Can Visit Los Angeles Without a Car. Here's How to Use the L.A. Metro Subway System
NewsAsk a Flight Attendant, Part 1 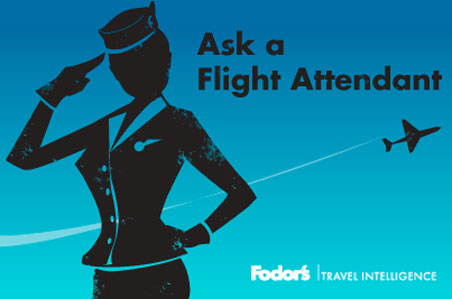 Our resident flight attendant/Fodor’s correspondent Gillian Brockell was kind enough recently to answer a few open questions from our readers and, admittedly, some burning questions from the Fodor’s editorial staff. We had tons of questions to sift through, so we decided to break them down into digestible groups of three at a time.

Herewith, the first installment of "Ask a Flight Attendant." And if these inspire any questions of your own, find us on Facebook or Twitter and let us know what you want (need) to know!

When is the best time of day to travel to avoid delays?

The early bird gets the worm—and it also arrives on time, apparently. Yes, it’s a drag to wake up before dawn to catch a flight, but it’s also as reliable as air travel gets. Most aircraft go out of service at night, meaning it’s waiting at the gate when you get to the airport. Even if you live somewhere with mild weather, you can’t guarantee the aircraft for your afternoon flight isn’t coming from somewhere more volatile (hello, Florida). The fewer flights the plane does before it gets to you the better.

And whatever you do, don’t book a short domestic flight departing from a major East Coast airport between 6 and 9 pm! That’s when all the long flights to Europe and Asia take off, and the line on the tarmac averages 50-100 planes daily. Most airlines are good about factoring this into the arrival time, but not so much with those shorter flights. I used to commute weekly on an evening flight from New York to Texas. I did this for years and personally witnessed it arrive on time twice. We flight attendants called it "The Texas Red-Eye," because it so frequently landed at 3 in the morning.

Check it out. The government posts a "list of shame" every month of the flights with the most delays; like in September, Chicago to Dallas departing at 8:30 in the evening was delayed by more than 30 minutes three-fourths of the time.

So. Book before 7 am if you can. But a word of warning: Just because you’re arriving at the airport pre-dawn doesn’t mean it’ll be empty. Expect the security line to be as long and move as slowly as it always does. Good talk.

How long are your shifts?

It varies wildly. The rules are complicated, but, in general, we cannot be scheduled to work more than 14 hours. If there is a widespread weather delay, however, we’ll sometimes have to work longer than that. My record? Twenty hours—10 sitting on duty at the airport during a blizzard followed by a 10-hour red-eye. Yeah, I cried.

But before you freak out about the poor exhausted flight attendants, let me clear: Just because we can be scheduled for 14 hours doesn’t mean our shifts always last that long. Sometimes we’ll work a quick hop to the Caribbean followed by a long layover on the beach. We call those "princess trips." More often than not, we work about eight hours, just like you land-dwellers. Only we end the day on that previously mentioned beach.

What is the best place you have gotten to travel through work?

Of all the amazing cities, islands, mountains, and deserts I have been to, my favorite place was in the bowels of a certain New England airport. I was in between flights and exhausted after a fitful sleep on a bad hotel mattress. This airport wasn’t a base for my airline and had no crew lounge where I could rest. I knew I couldn’t stay awake in front of the public, so I did a bit of wandering in the secured area. And there it was: a giant bin of brand-new airplane pillows. I flung myself over the edge of the bin into the big soft cloud, set an alarm on my phone, tucked it into my underwire, and had the best nap of my life.