As if you need five whole reasons to head to an Italian beach town. But there’s more to Terracina—a city in the province of Latium, halfway between Rome and Naples—than the obvious perks of sun, sand, and handsome Italians on Vespas. Just ask the hordes of tourists who throng the city each summer, nearly doubling the 45,000-strong population. Or ask the citizens of the nearby towns, who make daytrips to Terracina rain or shine. What makes this small city worth the trek? Read on, my friend. Read on. 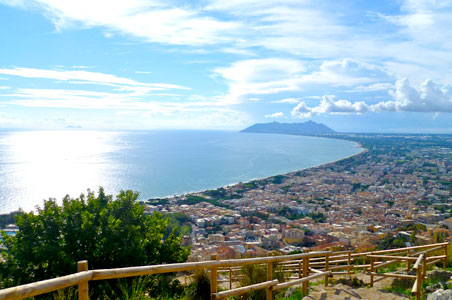 Mount Circeo: Terracina is snug against the Tyrrhenian Sea on the Riviera of Ulysses; so-called because legend has it that Odysseus sailed through on his travels. Nothing says “Odysseus was here” like Mount Circeo, rising out of the sea like the jagged profile of a reclining witch. The sorceress Circe is said to have lived there, plotting to turn Greek sailors into beasts. This uniquely-shaped rock formation is visible from other towns along the Riviera of Ulysses—and is, in fact, the site of the township San Felice Circeo—but Terracina is at just the right distance to create the perfect panorama of sea, sky, and mountain. The Mount Circeo is visible from most points in the city, perhaps none as overwhelming as when you’re standing in the sea, looking North. Each evening, the mountain goes up in flames: no two sunsets ever alike. 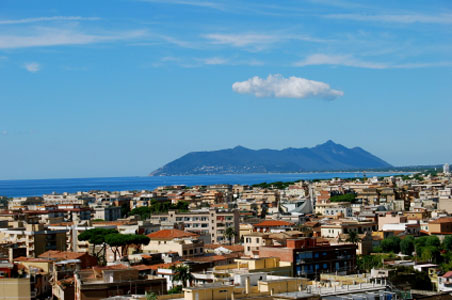 The Ancient Quarter: Most Italian cities have ancient quarters, sometimes shockingly different to each other even within the same region. Unlike the blue-and-white centro storico of nearby Sperlonga, Terracina’s centro storico is ochre-hued and green shuttered, with razor-narrow cobblestone streets. There are the ruins of a mosaic-covered Capitolium and a massive rose-tinted square, housing cafés, the Fascist-era town hall and the Cathedral of San Cesareo, built on the ruins of a Roman temple between the 5th and 6th centuries C.E. The ancient quarter’s few nightspots attract live music fans, mesmerized tourists, and locals looking for peace and quiet. A few Aperol sprizz cocktails and they sprawl themselves on the old stones like stray cats. 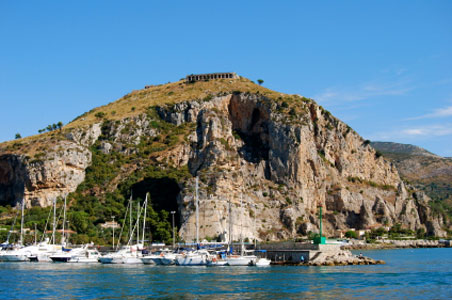 The View from the Temple of Jove Anxur: The Temple of Jove Anxur is perhaps Terracina’s most famous historical site. Built by the Romans in the 1st century C.E. at the apex of Mount Saint Angelo, the 1402m high temple overlooks a bewitching crescent of scenery, including the sea, Mount Circeo, and the city below. The view is impossibly romantic; the site of countless passionate encounters over the past two thousand years. If those temple walls could talk… 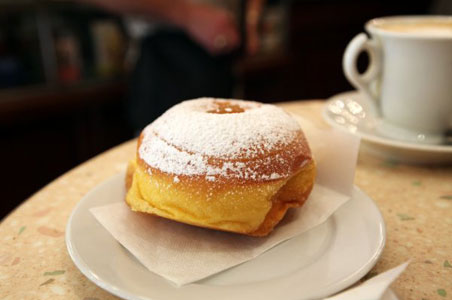 The Food: Is there any joy greater than eating fresh seafood at the beach? Terracina’s restaurant scene ranges from family-run mainstays to seafood shacks and small osterias helmed by pioneering young chefs. The typical regional seafood specialties may be enjoyed—risotto alla pescatora, calamari fritti—while land-grown culinary treasures include spicy boar sausage and bombe; deep-fried filled doughnuts traditionally eaten hot, at night. Terracina hosts a number of sagre (festivals) including a strawberry festival in late Spring, a chestnut festival in the fall, and a muscatel grape festival in late Summer. They say that Terracina’s muscatel wine was the wine of Ulysses and that Terracina’s muscatel grapes are the sweetest in the region.

The Music: And now on to practical matters: what do people do in Terracina for fun? For a relatively small city, Terracina has an excellent music scene, attracting fans from all over the province. Local bands like Chicken Prod.Inc rejuvenate traditional folk music; Muiravale Freetown produces Italian reggae; Anxur Kingz creates Italian rap tracks with rhymes written in Terracina’s local dialect. Local spinmaster “DJ Amaro” mixes funky beats like a chemist. Terracina’s musicians and promoters tirelessly seek to heighten the city’s presence in the Italian and global music scenes—there’s even a fledgling recording studio. Each year, the mod-themed Anxur Festival draws the area’s best musical acts and hordes of vespas from all over Italy and the UK.