Situated between the frequently-visited destinations of Mexico and Belize, Guatemala is all too-often flown over. But with ancient Mayan ruins to peek at, a stunning lake to reflect in, and exotic local wares that are both beautiful and affordable, this fairly sizeable country is worth its own stamp on the ol’ passport. What’s more, any time is a good time to visit weather-wise. Here are the top five reasons to book today. Believe me, you’ll be planning the next visit before you finish the first. 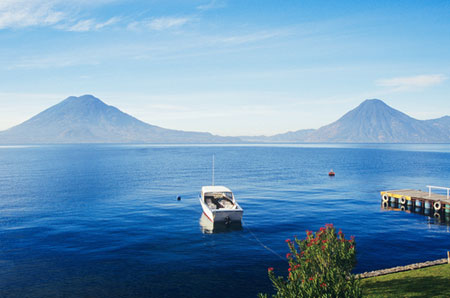 1. Wake Up to a Sensational View on Lake Atitlan

Three hours from Guatemala City, up in the country’s Highlands and lying at the base of three dormant volcanoes, Lago Atitlan is an unofficial natural wonder. Upon arriving in the somewhat shantytown of Panajachel, the lake’s largest community and main jumping off point for the several others around it, you have a choice: Stay put (fine if you’re a backpacker or looking for a populated party town) or jump in a taxi boat and disembark at one of the lake’s many seaside villages (highly recommended for some peace, quiet, and to properly "wake and lake").

Depending upon how far around the lake you go, you’ll pay between 3 and 10 queztales ($2-7) for a boat ride that can take up to a half-hour.

Just about 10 minutes via boat from Pana in El Jaibalito is the lovely La Casa del Mundo, where 20 uniquely decorated rooms of varying size and shape are dotted among the cliff, hanging over the glistening lake below (rates from $37/night). Some will require a climb, but one is more charming than the next, and if you’re anything like me—an indecisive, always-seeking-the-best New Yorker—you’ll even room-swap from night-to-night, just to capture a different view upon opening your eyes in the morning. After all, there’s not much else to do here than watch the boats go by while swinging on a hammock, drinking a Gallo. And how lovely that is.

La Casa should also be experienced for their world-famous homemade granola (OK, maybe more like Lieberman-Family Famous, as several of us have now smuggled home pounds of the nutty, coconut-y goodness), and their communal dinners. Each night, just after sunset, guests from all over the world gather to dine as a group. The multi-course meal—from fish to chicken to vegetarian soup—is just fine, but it’s the multi-culti company that will leave you truly satisfied. 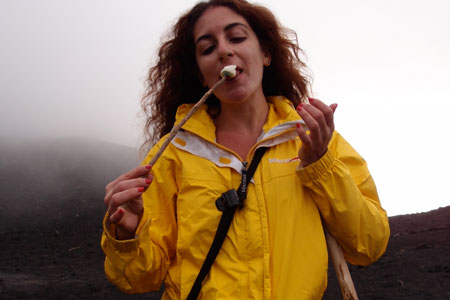 With 23 major eruptions since the 16th century, this active volcano is the country’s most exciting (and popular) to climb. The 5ish-hour hike, which is best done in the late afternoon to reach the summit by sunset, provides an array of spectacular views through differing landscapes. Start out in a forest, with rich, dark soil beneath your feet and hormigo trees growing high up to the sky, and end up breathless on flat, hard lava rock amid a wide-open cratered land that looks as if you’re on the moon.

But come prepared! It’s a long afternoon through changing conditions. First you’ll shed clothes on the way up as many pathways are steep and sweat-inducing. Then you’ll need to pile the layers back on as the winds pick up and the sun goes down. Also, don’t feel foolish for getting sucked into renting a walking stick from one of the Guatemalan kids who will inevitably bombard you at the route’s entrance. It will come in handy. (They won’t be touting flashlights, though, so bring your own. That sun goes down quick.)

Finally, before you descend, enjoy the fruits of your labor. Or, rather, an artificial sweet. Walk through smoking (and maybe a bit smelly) vapors, climb into active craters (check with your guide first to see if they’re safe) and find a naturally-heated hole for a marshmallow-roasting feast. (Again: BYO.) Who needs a campfire when a centuries-old active volcano will warm up your fluffy treat au naturale? 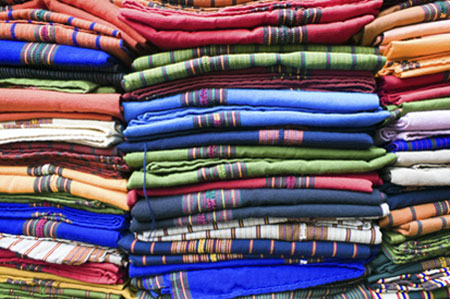 3. Shop, Shop, Shop ‘Til You Drop in Chichicastenango

Fans of the old afternoon (or entire day) of shopping should bring extra carry-on bags as there’s no shortage of locally-made goods to gather in Guat for a fraction of the price, and most of them can be bought directly from the source at the twice weekly market in Chichicastenango.

Located in the western Highlands and easily accessible as a day trip (via bus) from Atitlan or Antigua, this all-day affair attracts both locals and international travelers. Get there early if you’re looking to do some serious shopping; the aisles upon aisles of painted pottery, beaded bracelets, and woven placemats are bound to leave you overwhelmed. Like any major city bazaar, a lot of the sellers carry similar items (for different prices), but remarkably no two look alike! Each treasured textile varies just slightly from its neighbor next door where, yes, you can try to haggle for a better price. (And bring cash. Very few, if any, swipe plastic.)

At the end of the day, when you can no longer see straight, I actually suggest going back in for one more gander. The amount of imported Guatemalan-made wares resold at jacked-up prices back here in the US is mind blowing and you don’t want to regret not picking up an extra set of cloth napkins for your Grandma’s 85th birthday…even if it’s in two years. Case in point: Just weeks after returning, while wearing my new colorful woven satchel that I paid $20 or so for in Chi Chi, I saw a close replica going for $98 in a boutique in SoHo. Ah, victory. 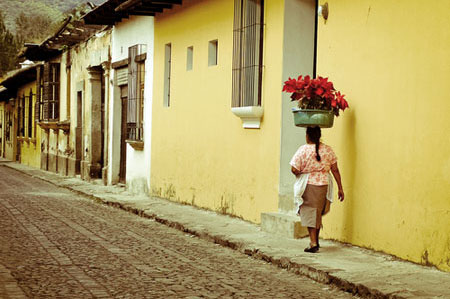 4. Go Back In Time in Antigua

This darling colonial city seems plucked from another era when Spaniards ruled and horse and buggies trotted. But in actuality, it’s just managed to withstand the test of time—and even a massive earthquake in 1717, which left the majority of the city’s monasteries, churches, and squares in ruins. Still, even the rubble remains intact and contributes to the city’s charm.

Amid all the natural stones and crumbled archways are bright, saturated buildings in blues and pinks and yellows, denoting different addresses of locals and the expats who have been sucked in by the allure.

Allow yourself to get lost on the cobblestone streets, whose avenidas (avenues) and calles (streets) form a complicated grid that require at least a few days to figure out. But wandering is part of the appeal. Look up at the blue sky via the broken ceilings of the Convento Santa Clara and then pop into the Antigua Galeria Del Arte where canvases are covered with modern creations by a mix of Latin American artists from the region.

The further you walk from the Parque Centrale, which is most lovely at night with twinkle lights and a beautiful fountain, the more hidden treasures you’ll find. At Dyslexia Books, for example, you’ll find everything from rare first editions to the often-swapped Naked Lunch by Burroughs and the loveliest of booksellers named Bill who will share his literary wisdom if you’ve got time. (Pull up a stool. You won’t regret it.)

There’s no shortage of quality restaurants or hotels in town either, which run the gamut from high class and gourmet (Mason Panza Verde and Como Como) to homely and hole-in-the-wall (Earth Lodge and Cafe No Se). Each still manage to maintain the city’s other-worldly enchantment. 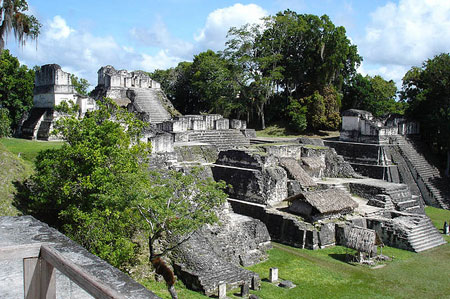 You’ve seen one Mayan ruin, you’ve seen them all, right? Not so at Tikal. Situated in the country’s tropical El Peten region, these particular ruins—all 3,000 of them—are considered the first home to many of the Mayan communities, dating back to 200 BC. But they’re not only popular for their remarkable place in Mesoamerican civilization, but for their physical place in the jungle, too. Surrounded by thick, dense forests, which offer a striking contrast against the soaring structures, some of Tikal’s temples even exceed the height of the trees. (Those with a fear of heights may want to rethink venturing up.)

Regardless of whether you climb, make sure to hang around the park until dusk to catch the sky turn into sherbet and hear the howler monkeys go (you guessed it…) bananas. Their screech-meets-moan is a sound you won’t soon forget.

It’s also worth joining a group or hiring a guide to learn more about the rich history, and doing so will still afford you the intimacy and freedom of going off on your own a bit if the en-masse-expedition isn’t your thing.

Staying the night is recommended since the expanse of the archeological site is as massive as it is centuries-old, and even if you don’t cover it all, it deserves a whole, uninterrupted day of exploration. Should you stay in the park, be prepared to spend more money for not-so-great accommodations or food. But if you’re an early riser, you’ll be closer to the temples and can head up before all the day-trippers. (And maybe even for sunrise. The view from Temple IV is not to be missed.)