News Apeksha Bhateja What Are the Chances You'll Get Monkeypox at a Hotel?
NewsFive Poetic Things to Do in Brooklyn

Five Poetic Things to Do in Brooklyn 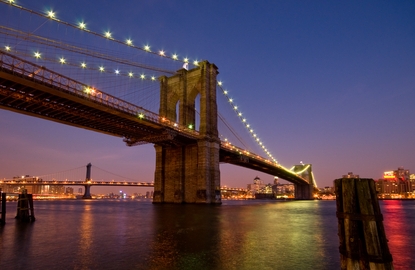 D. Nurkse is the author of the recently released A Night in Brooklyn. Here he shares five poetic places to visit in Brooklyn.

Living in Brooklyn is like being everywhere in the world at once. Within blocks of my apartment, I can find West African cowsfoot soup, Israeli figs, Siberian dumplings, Jamaican curry, nine Mexican regional cuisines, and a Kazakh restaurant that sells braised sheep’s testicles (I’m vegetarian).

It’s not just food. I hear Ladino and the lilt of India’s Malayalam. And English is transformed. A man training his spaniel tells it, "heel up, you know what I mean?"

Brooklyn is a honeycomb of small villages. Where else can you still find the diner that sells scrapple or lamp chops with mint jelly, and a counter man in a white paper bag hat who answers a customer, "Do we have ginger ale? Does a cat have whiskers?"

A few generations of hipsters into the future, a few blocks of gingko-shaded streets into the past, intensely local and multi-cultural, Brooklyn is safer than visitors think, more centered. For me, it was a terrific place to raise a kid. I watched soccer moms reclaim playgrounds by any means necessary. Civic action worked. I saw vertiginous change. When I first jogged around Prospect Park, a large gentleman in a white Impala told me, "Someone after you, kid? Twenty bucks, I put you in the trunk and take you to Bayonne." Now—and yes, we have mixed feelings about this—Parisian chefs compliment each other with "c’est Brooklyn."

Five poetic things to do in Brooklyn—not, of course, to discourage anyone from crossing the river to buy shoes or have a delicious dinner:

1. Visit Weeksville Heritage Center, a preserved enclave of African American culture dating back to 1838. Free art and music programs are often offered, many for kids. Brooklyn is the largest African American borough in the United States.

2. Stroll through Green-Wood Cemetery. The democratic inheritance of Walt Whitman is palpable here where all creeds and nationalities rest together, from Boss Tweed to Jean-Michel Basquiat. These 478 acres of sculpture have plunging harbor views, and once rivaled Niagara Falls as the nation’s major attraction.

3. Steal a ride on a fishing boat out of Sheepshead Bay. Check the listings online or in the Daily News, and hitch a cheap ride on a charter at dawn. No need for a license or the desire to kill fish. You’ll understand how the city once faced the sea, and will again.

4. Visit the Brooklyn Historical Society, a museum, library, and research center, convenient to stunning urban hikes across the Brooklyn Bridge and along the Brooklyn Promenade.

5. Enjoy culture on an intimate scale. Once, you could hear titans like Miles Davis in bars for the price of a boiled egg. That may be over, but listening to jazz in Brooklyn, you still feel like a human being in conversation with a peer, rather than part of a focus group being sold a package. Consider Sista’s Place in Bed Stuy or Barbes in Park Slope. In summer, don’t miss the free Celebrate Brooklyn concerts, which have featured Doctor John, Hugh Masakela, and Bob Dylan.

As a writer with Eastern European roots, I was brought up a devout pessimist. If there’s progress, it’s a bad omen. Brooklyn has challenged that. But I still have the rest of the planet for corroboration.

D. Nurkse is the author of nine previous books of poetry. His recent prizes include a Literature Award from the American Academy of Arts and Letters and a Guggenheim Fellowship. A former poet laureate of Brooklyn, he has also written widely on human rights. His latest book is called A Night in Brooklyn, and was released earlier this month.