Thoughts of Amsterdam likely bring to mind three "Cs": canals, cute houses, and coffee shops. But the fourth C, culinary adventures, can also be part of your Amsterdam itinerary, if you know where to look. While long-time favorites like bitterballen (deep-fried balls of meat) and tostis (simple grilled or fried sandwiches) should still be enjoyed at a traditional Amsterdam brown café, you’ll want to round out the eating portion of your Netherlands trip by sampling these other foods the Dutch do particularly well. 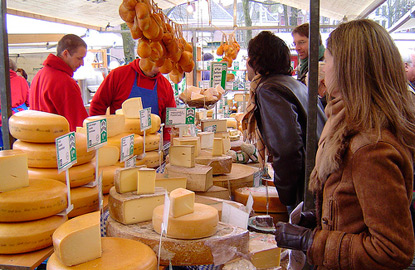 For the very best Dutch cheeses, skip the tourist shops filled with industrial-sized wheels of Gouda. Instead, go where the locals do—the Saturday farmers market from 9 am till about 4 pm on the Noordermarkt, in the pretty Jordaan area. Called the Boerenmarkt, or biological food market, you’ll find several stands selling all types of cheese from Holland, including creamy young ("jong") and harder, more complex aged ("oud") Goudas, as well as more unusual offerings like Dutch cheeses containing cumin or walnuts.

Insider Tip: Ask for cheese samples to see which you like best before making a purchase. If your Dutch is rusty, no worries—everyone speaks English. Bring your own cloth shopping bag to really look like a local.

Runners-Up: With an amazing selection of Dutch (and other European) cheeses, De Kaaskamer is crammed from floor to ceiling with cheese after pungent cheese. Then, you’ll find several cheese stands at Amsterdam’s largest market. Albert Cuypmarkt is located in the trendy De Pijp area and open Mondays through Saturdays from 9:30 am till about 5 pm. 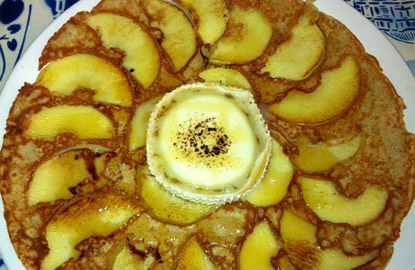 Whether you choose to eat pannekoeken (enormously large pancakes) or poffertjes (mini-pancakes), you’re in for a real Dutch treat. Pannekoeken are larger and thinner than American-style pancakes and come with savory fillings like cheese, ham, and/or veggies or sweet concoctions such as strawberries and whipped cream.

Poffertjes, on the other hand, are smaller and puffier due to added yeast, usually served by the dozen, and come topped with melted butter and powdered sugar. Here’s where to find the best of each pancake type in Amsterdam:

Pannekoeken: Just up the street from the Anne Frank House, the often-packed tourist favorite The Pancake Bakery serves up tasty pannekoeken with unusual choices including Indonesian (chicken with peanut sauce). Delicious dessert pancakes, too.

Insider Tip: Don’t be afraid to combine several fillings for a Dutch pancake that’s truly your own.

Insider Tip: Get extra napkins to wipe off the excess powdered sugar sure to coat your chin and clothes. 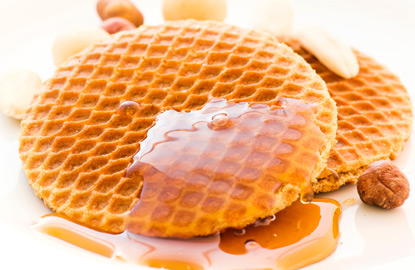 Take two still-warm, freshly grilled thin waffles, spread gooey caramel-like syrup in the middle, and stick them together into a delicious edible treat: the Netherlands’ famous stroopwafel. Find the best stroopwafel at the Lindenmarkt—an offshoot of the Boerenmarkt op de Noordermarkt held on Saturdays from 9 am till about 4 pm. Also try delicious stroopwafel at the stand in the Albert Cuypmarkt, held every day except Sunday.

Insider Tip: Eat your stroopwafel immediately after you get it for that melt-in-your-mouth feeling before the waffles begin to cool and harden. 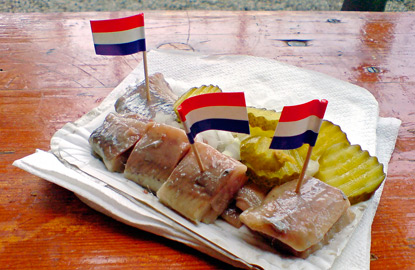 Whether you’ve never sampled herring or are a true herring fan, Amsterdam’s the place to give it a taste. Herring carts, called haringhandels, can be found throughout the city; good choices include De Zeevang, near Dam Square at Nieuwezijds Voorburgwal 226 and Frens Haringhandel at Singel 486.

If you’re a herring newbie, order the broodje haring, where the fish is served on a bun with pickles and onions; if you’re already a herring lover, try it sliced, no bread, with a toothpick. Note that herring carts are generally closed on Sundays and Mondays, as well as after 6pm.

Insider Tip: If you’re in Amsterdam in or around June, try the seasonal "Hollandse Nieuwe" or young Dutch herring, which many locals claim has a distinctly fresher flavor. 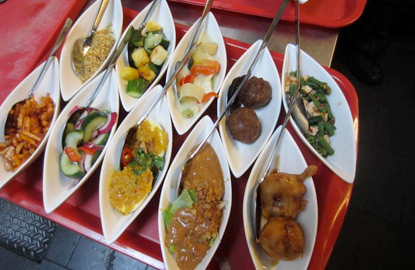 A former Netherlands’ colony, Indonesia has left its mark on Dutch cuisine with rijsttafel, or rice table, akin to an Indian thali with many small plates for sharing, all served with rice on the side. Though you can usually choose from meat, fish, and vegetarian rijstaffels, be warned—many dishes are highly spiced, even if you request mild flavors.

Though every Amsterdammer has his or her favorites, here are the ones we’ve liked best:

Sampurna: Good value for the money with huge rijsttafels, you’ll find Sampurna across from the Flower Market.

Insider Tip: Try to visit an Indonesian restaurant with a group; that way, you can each order different rijsttafels and sample a greater variety.

Thinking of a trip to Amsterdam?

For up-to-the-minute hotel and restaurant recommendations, as well as the best planning advice, check out our Amsterdam Travel Guide.