News Ronny Maye Should You Cancel Your Vacation to an Area Impacted by a Natural Disaster?
NewsFive Adventures on Canada’s West Coast

Steeped in nature’s grandest delights–majestic mountains, vast rainforests and raging rivers—Canada’s West Coast is the ultimate summer playground. Temperatures hover in the mid-70s with a cool breeze off the Pacific Ocean, making British Columbia’s part-wild, part-cosmopolitan seaside locale easy to explore for both soft- and hard-core adventurers. And it’s not just tourists who whale watch and mountain bike; locals make the most of the latitude and longitude that allows for morning hikes and afternoon dips in the ocean! Here are five of the Canadian West Coast’s wildest adventures. 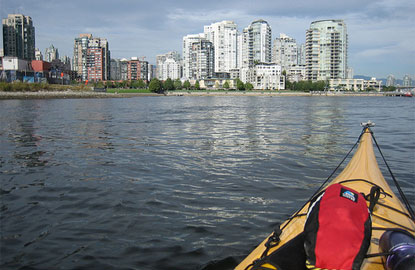 Often dubbed the ‘city in nature’, Vancouver’s as much a world-class metropolis as it is an outdoor playground. Fronted by mountains cascading into the ocean, its glass buildings reflect the seaside surroundings. Visit Granville Island—one of Vancouver’s most beloved attractions—to rent a kayak and glide beside Vancouver’s sights.

Stay: After your ocean adventure, take a short stroll into the centre of town to the newly re-opened luxury Rosewood Hotel Georgia. Welcoming guests like Elvis and Katherine Hepburn since 1927, it recently got a meticulous facelift, at once preserving and modernizing her beauty.

Getting There: Most major airlines fly into Vancouver International Airport. One of the Vancouver 2010 Olympic legacies is the Canada Line, 25-minute rapid rail system running from the airport into downtown. 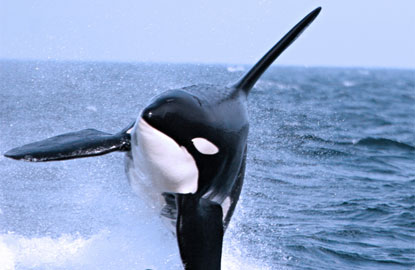 Take one gander at Victoria’s inner harbor and, aside from tall ships and yachts, you can’t miss the pod of whale watching boats. Located at the base of Vancouver Island near open water, Victoria is perfectly poised for orca, minke, humpback, and grey whale sightings. Keep your eyes peeled for elephant seals and sea lions too.

Stay: Just two blocks from the harbor in the heart of downtown Victoria, find The Magnolia Hotel. With only 64 rooms, this classic boutique property excels in highly personalized service, and includes breakfast and WiFi in every stay.

Getting There: British Columbia’s capital city can be reached by air, or a combo of land and sea. Taking a 30-minute flight from the Vancouver to Victoria harbor on a low-flying Harbour Air seaplane is a spectacular way to gaze at the Gulf Islands between the two cities. Otherwise, drive 45-minutes outside of Vancouver and hop onto a 90-minute ferry. 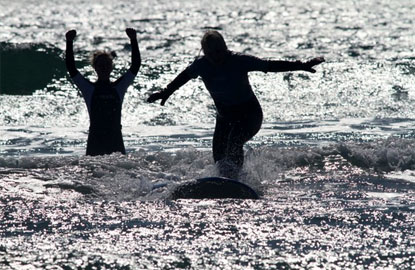 One of the Pacific Ocean’s first points of contact between Japan and Canada, Tofino is a casual, sea-swept town with miles of beachfront. For this reason, it has become the hottest surf spot in Canada beckoning surfers in thick wetsuits with booties and hoods to brave the wavy waters year-round. Rent a board, catch a wave and celebrate your surfing success leaning against a log among the locals on the beach.

Stay: Occupying one of the largest oceanfront plots on MacKenzie Beach, the a-frame cottages at Ocean Village Resort are casual enough to prop your surfboard against, and close enough to carry it from surf to sand.

Getting There: From Vancouver, you can either take a one-hour floatplane, or a five-hour car and ferry hybrid. 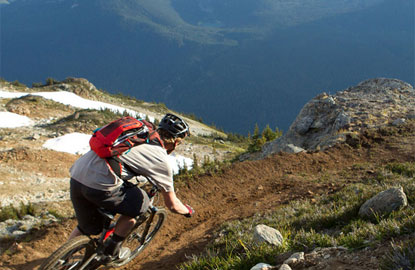 The main winter wonderland site of the 2010 Olympics, Whistler performs a quick-change in summer when the snow melts and the ski runs, cross-country trails, and snowshoe paths are swarmed by mountain bikes. Dodging the occasional black bear, extreme mountain bikers storm Whistler Mountain clad in shoulder, knee, and shin guards. Lovers of the less extreme will want to navigate the miles of paved paths connecting Whistler Village with the glacier-fed lakes of Canada’s premier adventure address.

Stay: A one-minute bike ride from the (paved) Whistler Valley Trail system, the Fairmont Chateau Whistler is a swanky, four-season resort basking in the glow of the bright peaks above (not to mention, it’s a Fodor’s Choice hotel). Bonus, a bike valet can be used to store your wheels, or if you’re a member of Fairmont’s loyalty program, the hotel has four complimentary bikes.

Getting There: Multiple modes of transport will get you to Whistler from Vancouver. By car, it’s a 90 minutes; by luxury train, it’s three hours; by plane, it’s a half-hour. 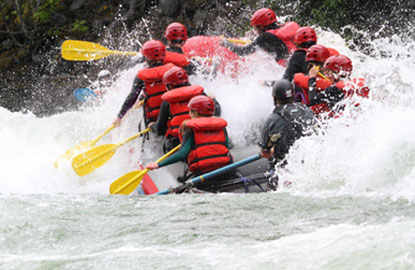 Whitewater Rafting in the Fraser Canyon

Canada’s West Coast is filled with alpine glaciers, and every summer they melt gushing fresh water from peak to creek. Making for a roaring adventure, brave BC’s wild and winding rivers with the help of REO Rafting, a whitewater rafting company that’s so big on safety, they train other outfitters. Sought worldwide by rafting regulars, book a trip down the Nahatlach and cruise through class three and four rapids cool enough to refresh you for the entire summer. Note, hot chocolate and a hot tub await you on return.

Stay: Glamp (glamorous-camping, obviously) in REO Rafting’s woodsy outpost in a Moroccan-themed deluxe tent complete with a beaded entry and a deck overlooking the frothy river below.

Getting There: The easiest way to reach REO Rafting’s Base Camp is to take a three-hour drive from Vancouver, passing through some of BC’s lovely, historic towns.

Thinking of a trip to Vancouver and beyond?

For up-to-the-minute hotel and restaurant recommendations, plus the best planning advice, check out our Vancouver Travel Guide.