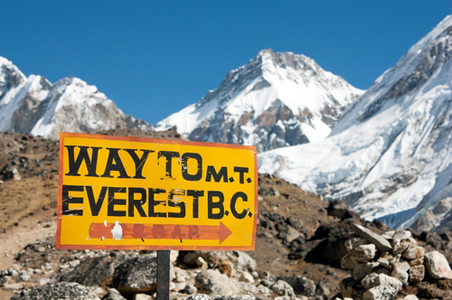 A guilty secret shared among many of those who have trekked to the base camp of Mt. Everest is that it’s a comfortable and enjoyable excursion requiring only a modest level of planning. This is partly because the last decade’s growth of visitation to the area has resulted in an income windfall for the host Sherpa population. They have in turn invested broadly in infrastructure, most significantly the construction of quaintly pleasant wayside inns.

Psst! Enter below to win the Vast Unknown Everest Gear Sweepstakes including mountain-ready gear from Eddie Bauer and a signed copy of Broughton’s book below!

After an early morning (and rather hair-raising) flight from Kathmandu to Lukla, you can have breakfast at any number of cafés that ring the airstrip, and then head off up the trail. From the outset, you are immersed in ridiculously breathtaking scenery. No guide is needed; the two-lane walking route is a movable, multi-cultural feast: each year, 25,000 foreign trekkers visit the Everest area—known as Khumbu, which is basically synonymous with Sagarmatha National Park, a UNESCO World Heritage site.

If you’re reasonably athletic—a tennis player, let’s say—then you don’t need much conditioning for a trek to Everest. You’ll get in shape as you go. Sensible outdoor shoes of the low-top hiking variety, or even sneakers, are generally fine. And take a sleeping bag, which you lay on top of the foam mattresses that are the staple bedding of the trekking lodges. 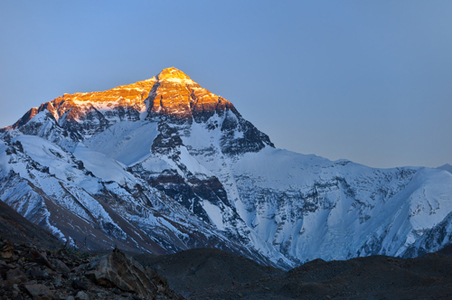 Virtually all the lodges have private rooms. Reservations aren’t required, and most lodges share identical menus and pricing. (Count on about $35 a day, total.) Along most of the route, cell phone service is even reliable and not expensive. Calls to the US, for instance, run about 7 cents per minute. If you have a cell phone with a removable SIM card (Verizon doesn’t offer this, FYI), you can pick up a Nepal SIM card in Kathmandu, and use it for the duration of your stay in country. Some of the lodges—as well as Everest base camp itself—feature cyber cafés, where tea and yak steaks can be served while you surf and download images from your camera. The hot showers are rustic, but generally warm and exhilarating after a day on the trail.

I hesitate to mention that you can trace the entire trek route to base camp on Google Earth. Links are now being developed that will allow you to crane your e-neck at the surrounding mountains and tour the monasteries virtually, view their artwork, and (after linking to other sites) make respectful donations in gratitude for your visit.

I’m not sure I feel comfortable with breathy proximity of the virtual world to the real one. I generally suggest that folks actually go and appreciate the trek for themselves—in person, in 3-D, taking it in with all the senses. Schedules, and expectations, should be left behind in the city. Which brings us back to preparation: too much of it can be more burden than help. Most of what you might need can be purchased along the route anyway, and competent medical care is available in at least two villages.

Simply go. Enjoy. Learn. Breathe it all in. And let it all out.

Broughton Coburn is the author of several books that relate to the Himalaya, and Mt. Everest in particular. His most recent is title is The Vast Unknown: America’s First Ascent of Everest, published by Crown. He has also been a longtime friend of the American Himalayan Foundation based in San Francisco.