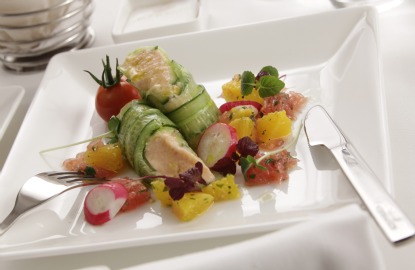 It’s dinnertime. You’re hungry, tired, and can’t make up your mind about what to eat. To add insult to injury? You’re soaring some 30,000 feet above the Atlantic. Happily, deep-pocketed travelers needn’t fret when flying first class on UAE-based Etihad Airways, since they can simply ring for their own private chef! With this newly launched program now rolled out on New York–Abu Dhabi routes (the private chef feature debuted on other routes in December), Diamond First Class passengers do indeed have access to professional chefs, who will cheerfully whip up whatever their well-heeled client’s heart desires.

Want your steak seared to medium rare with a sauce concocted especially for your palate? No problem. Prefer your eggs sunny-side up instead of scrambled? They’re on it. Need the words "Happy 21st Birthday, Carrie!" frosted on a cake? Your birthday wish is their command.

I recently took on the tough assignment of hopping a flight to Etihad’s test kitchen at their training facility in Abu Dhabi to check out these somebody-pinch-me indulgences firsthand. As the plane sped down the runway, I snuggled into my luxurious private cabin. Though I was technically traveling business class, a kindly flight attendant also slipped me some first-class amenities—for the sake of journalistic record. As he made his way down the aisle, he passed me a dark bag: Tucked inside was a Swarovski-encrusted black "sleeper suit" in a woman’s size small. I guess first class means never having to pack your own PJs.

Best of all, the first-class bathroom is huge, and more than twice the size of the notoriously cramped, regular ole economy-class airplane lavatory. There’s even a fold-down bench, so you can comfortably slip on your sleeper suit without losing an eye to a Swarovski stud during turbulence.

Suited up in style, I flipped on my seat massager, reclined my chair/bed to the horizontal position, and hunkered down under a weighty velveteen comforter for the 13-hour flight.

Soon enough, it was time to eat (and it would seemingly remain "eat o’clock" for the rest of the flight). In addition to Champagne and an amuse-bouche (manifested as heavenly risotto balls on my flight) from the moment you settle in, both business- and first-class passengers are offered an à la carte degustation menu—featuring appetizer, main course, sides, wine (and other beverages), and desert options—along with an "anytime" menu full of options that are available, well, anytime.

The deliciousness also trickles down to the economy-class menu, with tempting entrée choices, along with ice cream and hot dessert options (a first for any airline economy class).

In what seemed like no time, I arrived at Etihad’s chef training kitchen in Abu Dhabi, where the decadent taste-testing continued. I was particularly enamored of the "Taste of Arabia" menu, highlighting mezes like baba ghanoush, and Arabic baklava for desert. I also couldn’t stop nibbling on the "Four Corner" starter dish, featuring guacamole from the Americas, Italian olives from Europe, lemongrass cream cheese from the Far East, and feta cheese to represent Arabic cuisine. (The airline also provides Western dining options on flights; plus, all food onboard is certified halal.)

While first-class chefs can’t magically conjure any dish while flying the friendly skies, they have full flexibility with individual ingredients: at least five proteins, three starches, three vegetables, and four sauces to choose from; a skillet, toaster, and oven on every flight; and the freedom to mix, match, add, and subtract at will.

"So what’s the craziest thing someone’s asked for?" I demanded of the chef on my return flight to New York.

"First-class guests don’t really ask for anything crazy," he admitted. "Mostly, they want me to be creative and decide for them."

Seriously?? Because if I’d plunked down $14,700 for a round-trip first-class ticket from New York to Abu Dhabi (the fare quote a recent search turned up), I’d be demanding rib-eye steak with all the trimmings, I professed to him.

"Okay," I said, pulling out the big guns. "Chicken nuggets?"

"Hmmm. . . I do have some roasted chicken," he countered, "that I could cut into whatever shape you like."

He had me. Apparently, there’s just no winning an argument with a first-class chef on a restaurant in the sky.

As the flight landed, I realized my fancy first-class carriage would soon morph back into the economy pumpkin ride that I was more accustomed to. I’d have to be content without hot desserts from here on out (though, that’s probably for the best). However, if you meet any sheikh charmings who know how to upgrade a lady, please send them my way!

Thinking of a trip to the United Arab Emirates?

For up-to-the-minute hotel and restaurant recommendations, plus the best planning advice, check out our online United Arab Emirates Travel Guide.