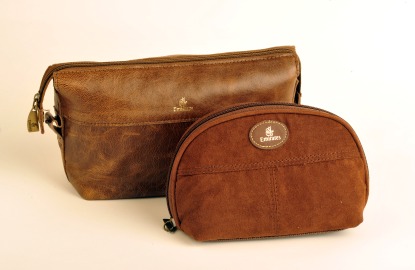 It might not be the top reason to splurge on a first-class plane ticket, but scoring one of the luxe amenity kits that get handed out in that exclusive cabin is certainly a perk. Virtually every international airline offers some sort of kit in first and business class, but sometimes it’s just a bare-bones care package of a sleep mask, earplugs, and a toothbrush with toothpaste. On the other end of the spectrum, some kits are brimming with enough indulgent goodies to make even an extra-long flight extremely comfortable. Here’s a rundown of the best offerings in the latter category.

Because of Australia‘s far-flung location, it’s understandable that national carrier Qantas has prioritized making the (long!) in-flight experience as enjoyable as possible. In first class, that means his-and-her amenity kits packed with Payot products, deodorant, toothpaste and toothbrush, and perhaps the best sleep aid out there: a soft blackout cotton mask that’s wider than average (to really keep out the external cabin light), with two pads to anchor it on the bridge of your nose and an adjustable Velcro strap for a perfect fit.

With a reputation to uphold for excellence in its first-class cabin, United Arab Emirates–based Emirates provides passengers with kits that do not disappoint. Elegant reusable brown cases come in suede for women, and leather for men, and are packed with Bulgari products like the unisex Au The Rouge fragrance. The products are especially great after a shower—and you can actually take one during the airline’s A380 flights. The kits also include a useful gender-specific item, including a disposable (and refreshing) scented cloth for women, and a sturdy razor for men.

Luxe unisex spa and skincare line Elemis has had a partnership with British Airways for years, and its fabulous-smelling products are used for preflight massage treatments in some of the airline’s first-class lounges (including those in Heathrow and JFK Airports). During the flight itself, first-class passengers receive a large kit with products from traditional British company D.R. Harris, which has been earning fans (including members of the royal family) of its natural product-based beautifiers since 1790.

As you might expect from the airline headquartered in the birthplace of Coco Chanel and Christian Louboutin, the products in Air France‘s first-class amenity kit are predictably chic. Lanvin, one of the world’s top designer labels, supplies the airline with a range of beauty products for its La Première kits, including a light fragrance that’s suitable for men and women. The Lanvin products were introduced in January, as part of a gradual refurbishment of the airline’s long-haul first-class cabin, which also offers Bose noise-reducing headphones. Plus, look for a special changing area (to put on pajamas, for example) on its Airbus A380 planes.