News Apeksha Bhateja What Are the Chances You'll Get Monkeypox at a Hotel?
NewsFinding NYC’s Best Ramen Shops

Ramen is to Japan as pizza is to New York: cheap, fast, and available on every street corner. But just as restaurants like Roberta’s and Babbo have vaulted gourmet pies to the top of NYC’s food chain, traditional Japanese ramen is no ordinary cup of noodles. At the best ramen shops in Tokyo, chefs spend their lives perfecting secret recipes and cult-like fanatics wait hours for their bowls.

Luckily, you don’t have to cross the Pacific for perfect ramen noodles. Old-world Japanese ramen shops have existed in New York for decades, but beginning with the arrival of star chef David Chang in 2004, the city has gone gonzo for gourmet ramen. Whether you’re craving vegetarian or pork belly, traditional or nouveau, New York has a ramen for you. From the side streets of Brooklyn to Manhattan’s tourist row, a rich bowl of this piping hot soup is never far from reach. 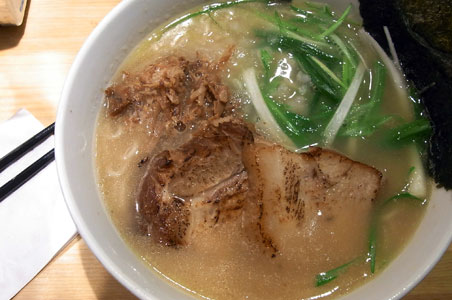 Want to travel to Japan without boarding a plane? Head for Totto, a cramped basement level ramen shop in Midtown that will transport you straight to a Tokyo alley. Totto is easy to spot amidst its Broadway neighbors, just keep your senses attuned for the smell of slow-cooked chicken stock. The specialty here is Paitan Ramen—a chicken and pork based soup in a minimalist style. If you can, grab a seat at the counter, where you can watch the chefs in traditional black bandanas as they torch thick slabs of pork to top each bowl. Totto is best for single diners or pairs and don’t plan to linger as the queue is often out the door so diners should sit, slurp, and leave. (Cash only.) 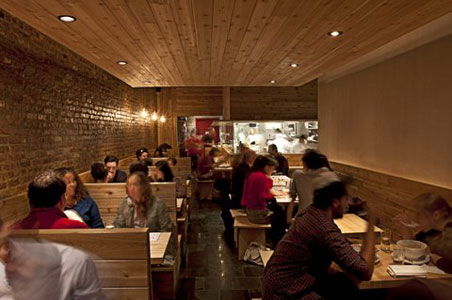 Ganso is a modern foodie’s dream. The restaurant proudly sources most of its fare from New York area farmers, and though the soy sauce and miso hail from considerably further afield, they too come from venerable Japanese producers. Ganso’s proprietors, Harris Salat, a food writer with credits at Saveur and Gourmet, and chef Rio Irie, formerly of Matsuri, are veterans of the Japanese culinary world and demonstrably passionate about their craft. The pair is an encyclopedia of knowledge on the origins and styles of their dishes, and Ganso’s seasonal menu offers an unusual depth for a ramen shop. The warm, woody space and variety of small plates invite you to stay a while. One word of warning: between bites of paper-thin gyoza, crackling crispy chicken wings, and house-made kimchi, you may forget you came for soup entirely.

The first real darling of the New York ramen scene was Ippudo, and it doesn’t show signs of slowing any time soon. More than two years after opening, you’ll still find a crowd huddled outside on any given night. Ramen fiends come for good reason: a bowl of the shop’s tonkotsu (pork bone) soup is the closest in flavor to any you’ll find in Japan. But Ippudo’s perfection is less an art than a science. The first US branch of a ubiquitous Japanese chain, the East Village shop offers the same boisterous atmosphere as its Japanese counterpart, and a similar menu to boot. While the Ippudo experience is somewhat formulaic, it delivers on a promise of reliably good ramen, every time. As the old adage goes, if it isn’t broken, why fix it? 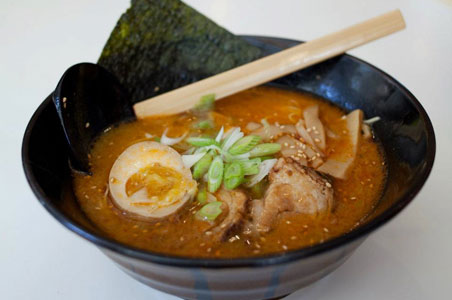 Sapporo, the northernmost metropolis in Japan, lies isolated hundreds of miles from Tokyo. Among Japanese people, the city is equally famous for its frigid winters and its miso ramen. It follows then, that Sapporo and Jin Ramen share some things in common. Like Sapporo, Jin is remote by NYC ramen standards, and both are beacons for unique Sapporo-style ramen, a spicy miso topped with sautéed corn. A short walk from Columbia University and Harlem, Jin aspires to make a big impact in its neighborhood. The restaurant’s owners, who run several establishments nearby, support local non-profit initiatives and dream of growing Harlem into a foodie destination. Judging by the packed house on a recent Tuesday, Jin’s transformation from a remote ramen outpost to the locus of a new Harlem food scene is well under way. 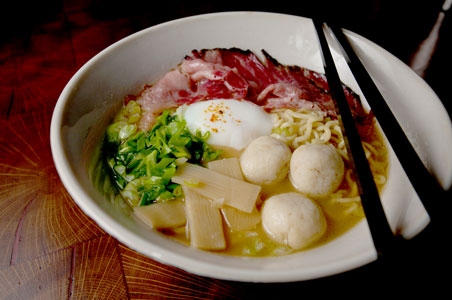 The menu at Dassara, which includes deli ramen topped with matzoh balls and ramen with curried goat and squash, may seem like an overt departure from tradition. But seasoned ramen fans know that it is a regional dish, and one of few in Japanese cuisine not bound to particular styles, ingredients or flavors. In this sense, Dassara’s self-proclaimed "Brooklyn Ramen" is exactly what ramen should be—regionally influenced, unique to its chef, and epically delicious. Dishes like the Xi’an lamb ramen, which is immensely savory and served hot, are good enough to persuade even the most stubborn of fusion-skeptics. This Brooklyn approach to ramen has other benefits—space for larger groups, an excellent sake and starter list, and, notably, a cozy bar at which to wait. Dassara may be doing ramen differently, but it is definitely doing it right.