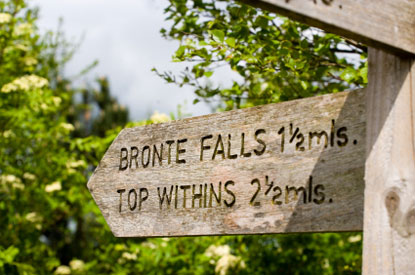 England’s Yorkshire inspired the Brontë sisters’ classic novels including Jane Eyre, released March 11 in a new film version. Here are the best places around Haworth to explore the dramatic landscapes and quiet corners of Brontë Country.

Few writers and their works are linked as closely to a landscape as Anne, Charlotte, and Emily Brontë are to the moors and the village of Haworth in Yorkshire. Despite family sorrows and restricted lives, they produced powerful novels that shocked Victorian critics but became enduring favorites on and off the printed page. Charlotte’s Jane Eyre has been on screen in more than a dozen versions; Emily’s Wuthering Heights has also captured film attention. Whether you’re a Brontë fan or not, the town and stark landscape offer satisfying discoveries.

Brontë connection: Start at the modest, simply furnished stone house where Patrick Brontë and his family lived from 1820 to 1861, when Patrick was the curate of the local church. Tragedy haunted the girls’ short lives (their mother, two sisters, and brother died here), but this unstuffy museum focuses on the sisters’ creativity. Among the exhibits are the "little books" in which the young Brontës spun epic tales of imaginary worlds. Charlotte, Emily, and Anne often wrote in the dining room; the setting may make you think of Jane Eyre’s words: "Do you think, because I am poor, obscure, plain and little, that I am soulless and heartless?"
Fodor’s review: The best of the Brontë sights in Haworth is the Brontë Parsonage Museum. In the somber Georgian house in which the sisters grew up, it displays original furniture . . . Read more.

Brontë connection: Charlotte called Haworth a "little, wild moorland village," and the stone houses are reminders of the past, when the Industrial Revolution was changing this textile town. The top-floor windows that almost touch the roofs provided light for home weavers working on looms. Toward the top of Main Street is the Black Bull, a pub favored by hard-drinking Branwell Brontë. Today, along with tearooms, sweet shops, and B&Bs, Main Street has tempting secondhand bookshops, a cheese store, a bakery with treats like Yorkshire parkin (ginger cake), and a vintage shop. A stroll is more relaxing outside the busy summer months.
Fodor’s review: Haworth’s steep, cobbled Main Street has changed little in outward appearance since the early 19th century, but today acts as a funnel for the people who crowd into the points of interest . . . Read more.

Brontë connection: A plaque inside this late Victorian church just off Main Street lists the family members, including Charlotte and Emily, buried in a below-ground vault. The gloomy graveyard outside the church—and facing the parsonage—has Brontë-related sights including the grave of family housekeeper Tabitha Ackroyd, and some sad stories. In the early 19th century, the small churchyard became so crowded that it caused contamination of the water supply. Between this and poor sanitation in Haworth, only 40% of the children lived to the age of 6, and life expectancy was 25.
Tip: Grab a lantern and take a guided nighttime tour of the churchyard with Philip Lister, www.Bronteguide.com. There’s plenty of spooky atmosphere, fun—and solid information.

Brontë connection: The sisters often walked on the moors; follow in their footsteps and take a 6-mi round-trip walk to the remains of the stone farmhouse associated with the Earnshaw home in Emily Brontë’s Wuthering Heights. The wide-open vistas take in rugged and mostly treeless moorland, heather, stone walls, and the occasional sheep. Charlotte wrote, "My sister Emily loved the moors….She found in the bleak solitude many and dear delights; and not the least and best loved was liberty." Add on a trip to the Brontë Waterfall, which the sisters enjoyed.
Tip: Stop by the excellent Haworth Visitor Information Centre at 2-4 West Lane, at the top of Main Street, for books, pamphlets, and walking maps.
Fodor’s review: Top Withens, a ruined, gloomy house on a bleak hilltop farm 3 mi from Haworth, is often taken to be the inspiration for Heathcliff’s gloomy mansion, Wuthering Heights. . . Read more.

Brontë connection: The Brontës walked to Keighley to shop. To see more of the countryside they loved, hop on this preserved steam railroad. It opened in 1867, shortly after the Brontë period, to serve the now-vanished woolen mills.
Fodor’s review: Haworth is on the Keighley & Worth Valley Railway, a gorgeous 5-mi-long branch line along which steam engines run between Keighley and Oxenhope. The Museum of Rail Travel . . . Read more. 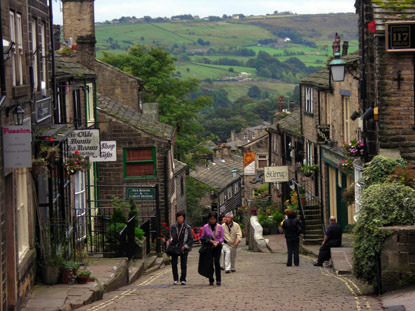 After exploring, sample hearty Yorkshire food and drink on your own pub crawl in Haworth. At the top of Main Street is the Old White Lion Inn, with a good restaurant and Tetley’s and Theakstone’s ales. Nearby are the King’s Arms, at 2 Church Street, and the Black Bull (Branwell Brontë’s haunt), on Main Street. Farther down, the Fleece Inn at 67 Main Street serves Timothy Taylor cask ales. At the bottom of town, the Old Hall on Sun Street can pull you a Jennings or Marston’s ale.

For a special dinner, try Weavers, with an appealing jumble of homey, comfortable furnishings; don’t miss the Yorkshire cheeses.

B&Bs and pubs with rooms are plentiful in Haworth; Aitches is right near Main Street, and Ashmount Country House is a short walk from the heart of town.

Exploring Nearby in Yorkshire

Yorkshire is in northern England, and Leeds is the major city nearest to Haworth. From London’s King’s Cross Station, East Coast trains make the 2.5-hour trip to Leeds. The drive from London to Leeds, mostly on the M1, takes about 2 hours. To reach Haworth by bus or train from Leeds, buy a Metro Day Rover for bus and rail and take the Metro train from Leeds train station to Keighley. From Keighley, take District Bus 663, 664, or 665; or take the Keighley & Worth Valley Railway (limited service). By car, Haworth is 3 mi south on A629 from Keighley.

For more information, check out Fodor’s guide to Yorkshire.