Fez and Marrakesh continue to be Morocco’s most popular tourist destinations, and with good reason. Fez is the Arab capital of Morocco, its center of learning and culture, and home to the oldest university in the Western world. Marrakesh, the dreamy burg at the base of the High Atlas Mountains, is perhaps more sensual than Fez, but history and archaeology buffs will find it no less compelling. One could easily spend a month — or several — in either city, but if time is limited, here’s a quick-hits tour of both cities. 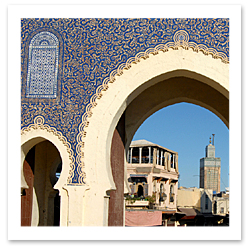 Bab Boujeloud
This gate is 1,000 years younger than the rest of the medina, but it’s generally considered the city’s most beautiful point of entry. (photo, right)

Andalusian Mosque
One of Fez’s most imposing structures, the mosque was erected in AD 859. The detailed carvings in the eaves are the main attraction.

Attarin Medersa
This is arguably the loveliest medersa in Fez, famous for its graceful proportions and elegant, geometrical carved-cedar ornamentation as well as its excellent state of preservation.

Bou Inania Medersa
First organized in the 10th century, the university is considered by many to be the Western world’s first center of higher education, predating Oxford, La Sorbonne, and Bologna.

Nejjarine Museum of Wood Arts and Crafts
The museum displays Morocco’s various native woods, 18th- and 19th-century woodworking tools, and a series of antique wooden doors and pieces of furniture.

Kairaouine Mosque
One look through the doorway will give you an idea of the immensity of this place. It was Morocco’s largest mosque until Casablanca’s Hassan II Mosque came along in the early 1990s. 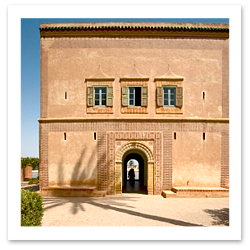 Menara Garden
A popular rendezvous haunt for locals, the garden is a peaceful and refreshing removal from the intense hustle and bustle of the city itself. (photo, right)

Djemâa el Fna
Centuries-old meeting place of regional farmers and tradesmen, the Djemâa stretches as far as the eye can see, flanked with small mosques and a series of cafés.

El Badi Palace
This 16th-century palace’s vast sandstone ruins are now a serene nesting ground for storks. Along the palace’s south wall are a series of underground dungeons and corridors, which you can freely explore.

Saadian Tombs
The mausoleum complex was discovered only in 1917 during the French Protectorate. The central mausoleum, the Hall of Twelve Columns, which contains the tombs of Ahmed el Mansour and his family, is dark and lavishly ornate.

Ramparts
The medina’s well-preserved walls measure about 33 feet high and 7 feet thick. Until the early 20th century, the gates were closed at night to prevent anyone who didn’t live in Marrakesh from entering.