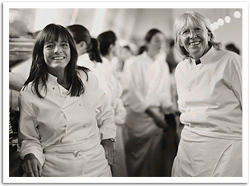 In 1958, a young British art student named Rose Gray buzzed past the French-Italian border on a rented Lambretta scooter and drove into Genoa, the birthplace of pesto. It was her first trip to Italy, a career-defining voyage that would ignite Gray’s passion for Italian cuisine.

Adam Gopnik, the New Yorker’s continental connoisseur, once gushed in a review that the River Café was “the best Italian restaurant in Europe,” despite its location on the banks of the Thames. Such a superlative reputation rests on the fine products that Gray and Rogers procure during their annual pilgrimages to the Big Boot. Polenta, fava beans, chickpeas, mozzarella, olives and wine are among the ingredients they source from the country for the River Café.

These ingredients are also the stars of Gray and Rogers’ new cook book, Italian Two Easy: Simple Recipes from the London River Café, a follow-up to their popular Italian Easy, first published in 2004.

In November, Gray will return to Italy to seek out the best bottles of Barolo and anything else that catches her fancy. Fodor’s found out where she’ll be traveling, what she’ll be eating, and what treasures she plans to bring back with her to London.

Craving crudo by the sea

“When you’re a chef, it’s so lovely to eat things that surprise you,” says the 67-year-old Gray. She discovered one such surprise at Da Tuccino (Polignano a Mare; 011 39 080 424 1560), a casual seaside restaurant in Puglia, south of Bari. “[T]he guy there just has a really fabulous imagination,” Gray says, describing crudo, the Italian version of sashimi. “He served raw blue fin tuna with bruschetta — just some toasted bread rubbed with garlic, and topped with tomatoes and good olive oil.” Gray also enjoyed a plate of raw langoustines, sprinkled with wild oregano.

“It’s basically the bottom of the Adriatic there, so the fish are just very fresh,” Gray says. She suggests visiting in June, when the blue fin is in season.

For fancier fare, Gray prefers Da Cesare (Albaretto Della Torre, Piedmont; 011 39 173 520141), one of her favorite restaurants in Piedmont, in Northern Italy. She makes a point to stop there on her autumn wine-finding expeditions, when white truffles are in season.

At Cesare, the delicate truffles are shaved over a chestnut and potato soup. “The flavor is extraordinary,” she says. “An earthy, pungent taste with a hint of fungi, a hint of hazelnuts. The smell sort of seduces you.”

Once you’ve sampled a white truffle, what comes next? “You want to drink a Barolo,” Gray says. Luckily, Barolo comes from Piedmont, too, so there’s plenty of the stuff nearby. She recommends Aldo Conterno’s 1990, 1998 or 2001 vintages.

In addition to its great seafood restaurants, Puglia is home to some of Gray’s most prized vegetables and a constant source of inspiration for her restaurant. Puglia’s capital city, Bari, is located 281 miles southeast of Rome. The regional cuisine prominently features agricultural products from the area, such as figs, olives, grapes and livestock, especially sheep. Many travelers encounter Bari on the way to Greece, as a number of ferries cross the Adriatic Sea from the city. 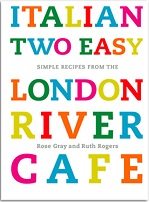 “I go to Puglia for ideas on how to cook vegetables,” Gray says. “I like going there in the autumn because that’s when they harvest the new season’s chickpeas and fava beans.”

Gray also enjoys finding fresh chilies and sweet olives in Puglia. Of the olives, Gray says, “They’re different from the ones they brine and preserve. Bigger, sweet, with white flesh. They fry them up and serve them with mashed up fava beans or chickpeas.”

Photo Caption: Rose (pictured, right) with partner Ruth in the kitchen of the River Café