News Apeksha Bhateja What Are the Chances You'll Get Monkeypox at a Hotel?
NewsFeast on Bold Delicacies to Celebrate Cinco de Mayo 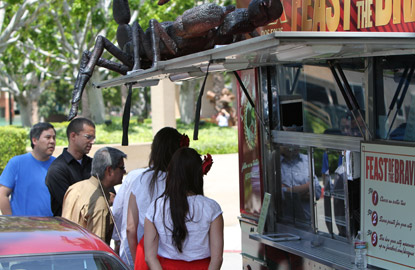 Looking to liven up your lunch hour? Try some cricket. To celebrate the 150th anniversary of Cinco de Mayo, Dos Equis is testing the limits of your appetite—and courage—this year with a 10-day, multi-city taco truck competition known as the "Feast of the Brave." It’s Fear Factor meets the streets, where six cities—Austin, Chicago, Dallas, Los Angeles, Houston, and Miami—compete for the bravest set of taste buds.

The various food trucks are serving up a slew of Mexican delicacies, ranging from goat, shark, and wild boar stomach to spiced crickets. For the most valiant member of your crew, there’s also the ultimate challenge: the mystery taco. Tacos will be measured in terms of bravery points; for example, a wild hare taco in Chicago is worth 8 points, a snails and corn fungus taco is worth 30 points in Miami, and the mystery tacos garner a staggering 100 points nationwide.

Some of each city’s top chefs are coming together to offer the (questionably) delectable tacos, and as of this morning Miami holds the lead with 69,600 bravery points courtesy of Jefe’s Original Fish Taco & Burger truck and Chef Jack Garabedian. Chicago isn’t far behind, though, with its hog ear and bird gizzard offerings from Chefs Salvador Alcazar and Evelyn Arroyo at Taquero Fusion Chicago. They’re closely followed by the intestine creations by Chef Andrew Brooks at One Taco in Austin.

The H-Town StrEATs truck of Houston, run by Chefs Jason Hill and Matt Opaleski, brings alligator and crickets into the mix, while Chef James Quinonez of the Rock and Roll Tacos truck in Dallas tests Texans with wild hog and chorizo tacos. L.A. chef duo Dominic Lau and Lawrence Lie of Don Chow round out the group with their signature Chinese-Mexican take on hog ear, bird gizzard, and wild boar.

You can stay up-to-date with the competition, as well as find out where the trucks are in your city, by checking out the Feast of the Brave on Twitter @staythirsty, or by visiting their Facebook page. It’s not just a contest for who has the strongest stomach—it’s a battle for local pride and national glory. Feast on the tacos in your city before you collapse into a food (or perhaps tequila) induced coma on Cinco de Mayo!