Coronavirus David Silverberg Are Your Kids Heading Back to Summer Camp? Here's What You Need to Know
Home  >  News   >   Fall Festivals in Japan: From Sumo to the Tokyo Motor Show

Fall Festivals in Japan: From Sumo to the Tokyo Motor Show

Japan’s warm fall days—without summer’s humidity or winter’s dampness—and dazzling foliage are reason enough to schedule an autumn visit. But October and November are also the perfect time to experience Japanese culture. Athletic events and festivals abound. Here are a few of the top fall events to check out if you’re in the Land of the Rising Sun.

Oh, and for those who dream of visiting Japan, you’ll traditionally find the lowest airfares in November, so now is a great time to book a last minute trip.

Two of the six Grand Sumo Tournaments (basho) take place in the fall. From September 13-24, wrestlers circle the ring at Tokyo’s Kokugikan—the National Sumo Arena—in the Ryoguku section of Sumida district. If you can’t make it to the tournament but are in town during September, head to Sumida to see the wrestlers out and about in their kimonos and wood clogs. Between 7am-11am you can peer through the doors and windows of the training stables to see practice sessions. The easiest stables to find are Tatsunami Stable (3-26-2 Ryogoku), and Izutsu Stable (2-2-7 Ryogoku). The area is also famed for clothing shops and eateries that cater to sumo sizes and tastes. The action moves to Fukuoka November 15-29 when the Fukuoka Kokusai Center hosts the last tournament of the year.

For information on all of the sumo tournaments, including ticket prices, check out the official tournament Web site. Tokyo. Sept 13-24. Fukuoka. Nov. 15-29. 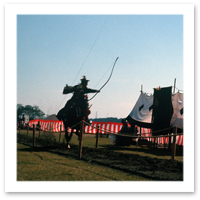 Set in the 800 year-old Tsurugaoka Hachimangu Shrine, the Yabusame contest tests equestrian and archery skills. Archers on horseback shoot at three targets as they ride along a straight 250-meter (820-foot) track. The Reitaisai festival that accompanies the traditional samurai sport includes music, worship, and a parade. Kamakura, Kanagawa Prefecture. September 14-16.

The “Fighting Festival” resembles an ecstatic demolition derby. Crowds from each of Himeji’s neighborhoods hoist portable shrines on their shoulders and march them to Matsubara Shrine. Then, groups smash the shrines against one another; the last crew with its shrine still balanced atop its shoulders wins. A parade featuring elaborate floats is the highlight of the festival. Himeji, Hyogo Prefecture. October 14 and 15.

Two thousand people dress in traditional garb that represents each of Kyoto’s 1,200 years of history for this parade. This is one of Kyoto’s three largest festivals. Take in the city’s ancient streets while watching the procession, which acts as a living timeline of Japanese dress and culture. Kyoto City, Kyoto Prefecture. October 22.

The day of the rooster occurs 2-3 times in November, and on these days vendors sell kumade rakes for “raking in wealth and good fortune.” The most popular location for finding vendors is Otori-jinja Shrine in Taito-ku (near Asakusa), but 30 other shrines also hold fairs. Listen for clapping and shouting around the stalls on these days; traditionally, the vendor and buyer clap and exclaim in rhythm when a rake is purchased. Tokyo. Mid-November. 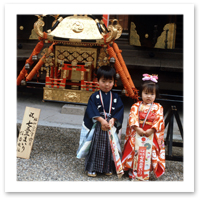 On the Children’s Shrine-Visiting Day, kids, dressed in their finest clothes, accompany their parents to shrines to give thanks for their health. They frequently carry Chitose-ame, long, thin sticks of candy that bring good luck. Boys aged 3 or 5 and girls aged 3 or 7 participate. Many families mark this day on the closest weekend to November 15, so you may see young children dressed up in kimonos around this time. All over Japan. November 15.

Japan is practically synonymous with automotive innovation, and between October 24 and November 4, you can see what the next year will bring. Test-drive new cars and motorcycles; see the Japan Car of the Year; and peruse industry-related exhibits. You can purchase advanced tickets for Y1,100 or at the door for Y1,300. See the Web site for more details. Tokyo. October 24 – November 4, 2009.

For more information on these events and other festivals and cultural happenings throughout the year, check out the Japan National Tourism Organization Web site.