News Ronny Maye Should You Cancel Your Vacation to an Area Impacted by a Natural Disaster?
NewsFaktum Hotels Lets You Experience Homelessness for a Night

Faktum Hotels Lets You Experience Homelessness for a Night 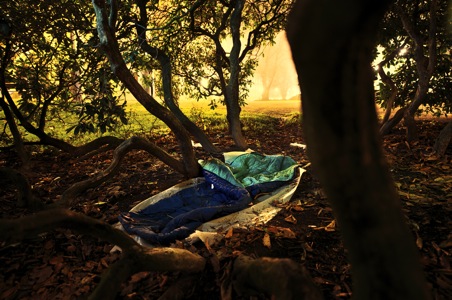 In November of last year, a non-profit street newspaper out of Gothenburg, Sweden established a chain of 10 hotels around the city. The rooms are budget friendly, but amenities are rather…unusual. In fact, 100 sek (about $15) gets you a variety of options—from a sleeping bag beneath some foliage in a park to a filthy mattress by the junction of the Säve and Göta rivers.

According to Faktum Hotels, Gothenburg contains about 3,400 homeless people, and the "rooms" one can "book" at their hotels are sites representative of the harsh living conditions the homeless in this city endure. Faktum, the street newspaper from which the hotel draws its name, is looking to start a conversation about homelessness in the city, as well as provide a means of support for the homeless population, whose members sell the newspapers. The cost of the room goes to support the organization’s goal of job creation for the city’s homeless.

According to Faktum Hotels’ site, there’s no way to guarantee that your actual "room" will be available to sleep in. Each site has been chosen and prepared by a member of the homeless population that Faktum serves.

"Most people enjoy Faktum Hotels as a virtual experience and share it with their friends on Facebook and Twitter," says Faktum editor-in-chief Aaron Israelson. "The main goal is to raise awareness and spread involvement."

To date, about 1,000 rooms have been booked. For more information or to book a room for you or a friend, visit their website.