FAA Allows for Electronics Use During Entire Flight 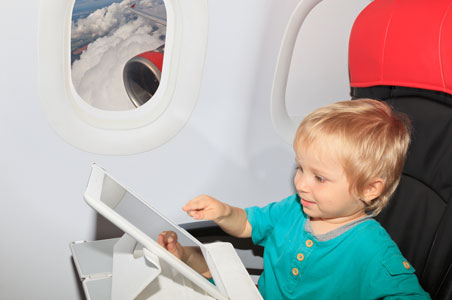 Turning off your electronic devices in-flight is about to become a thing of the past. The FAA has formally accepted the recommendations previously submitted to allow the use of personal electronic devices (PEDs) from gate to gate rather than only while at cruising altitude. This does not mean that all devices are permitted on all airlines or aircraft immediately but it does lay the framework for airlines to quickly reach that point. Both Delta Airlines and JetBlue Airways have already submitted paperwork to the FAA and are expecting approval very quickly.

The new rules will allow smaller devices—phones, eReaders, and tablets—during all phases of flight other than the actual take-off and landing events. Larger items such as laptops will still need to be stored throughout the taxi period. In-flight internet connectivity and media streaming will also be permitted throughout the flight, assuming the airline provides such services. In-flight connectivity provider Gogo has indicated that its services are not optimized to work below 10,000 feet so flights with that service, including those operated by Delta, US Airways, American Airlines, Alaska Airlines, and Virgin America will likely not have internet connectivity throughout the flight. Southwest and United Airlines use satellite-based systems which can work in the air and on the ground; JetBlue is also deploying a satellite-based system starting later this year. As always the final details on the implementation of these guidelines will come down to individual airline policy. These policies must be filed with the FAA and approved but the specific rules are set by the airlines within the guidelines the FAA has released.

In a statement Transportation Secretary Anthony Foxx noted the inevitability of this change and spoke to the value it will bring to passengers, "We believe today’s decision honors both our commitment to safety and consumer’s increasing desire to use their electronic devices during all phases of their flights. These guidelines reflect input from passengers, pilots, manufacturers, and flight attendants, and I look forward to seeing airlines implement these much anticipated guidelines in the near future."

Voice calls via cellular service are still prohibited in flight. This rule is set by the Federal Communications Commission (FCC), not the FAA. While the recommendations to the FAA suggest that they work with the FCC to review that policy there are no immediate changes expected.