News Apeksha Bhateja Europe's Airports Are Chaos This Summer. And Now There's Another Problem
Home  >  News   >   Exploring the Wild in the Ecuadorian Amazon

Exploring the Wild in the Ecuadorian Amazon 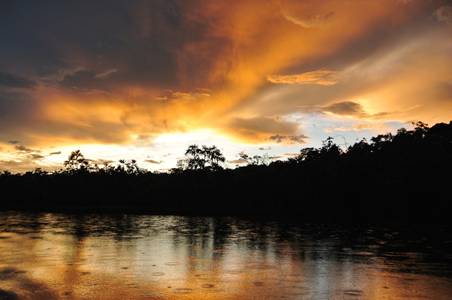 The Amazon is a fantastical frontier, a lush and steamy jungle bubbling over with biodiversity, where both above and below the sun-soaked canopy, flora, fauna, and fascinating indigenous tribes are swept up in a constant struggle for survival. This wilderness provides sanctuary for a staggering number of native species: Ecuador’s section alone counts some 650 types of trees, 600 varieties of birds (from swooping parrots to cartoonish toucans), 600 species of fish, 250 kinds of amphibians and reptiles (slithering anacondas, crafty caimans), and a mishmash of some 200 mammals (from sleepy sloths to the elusive jaguar). Oh, and more insects and arachnids (numbering more than 100,000) than I care to recall (tarantulas, and millipedes, and army ants, oh no…).

A wildlife enthusiast, my recent trip to the Galapagos—which dominates the country’s tourism spotlight—proved easy enough to pair with a four-day jaunt to the lesser known "El Oriente," as Ecuador’s Amazon region is dubbed. Here, especially in the sections clustered around Yasuní National Park, a UNESCO Biosphere Reserve, visitors are rewarded with what’s widely considered to be one of the Amazon’s—and the world’s—richest representations of ecological biodiversity. 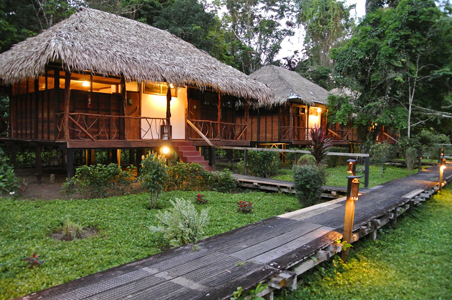 I signed up with Latin American-specialized adventure tour operator, Adventure Life, for a tour set in the park’s vicinity at the remote Sacha Lodge. Offering rustic refinement on 5,000 pristine acres of private ecological reserve, the lodge proved a perfect base for creature encounters, without sacrificing creature comforts.

Getting there is an adventure itself: A 30-minute plane ride from Quito soars over the Andes before touching down in the regional hub of Coca, followed by a two-hour motorized canoe ride along the Napo River, an Amazon River tributary. A short hike and another paddle ride later, I was finally upon my prime wildlife-viewing perch.

The lodge is a sort of sleepaway camp for sophisticated grown-ups. Guests mingle at the upstairs lounge and bar and linger over generous and rather exceptional buffet-style meals, served three times daily; one night, an alfresco BBQ was held by the lakefront.

The 26 spacious cabin-style guestrooms, in the midst of renovation, are set under thatched ceilings and connected to the main lodge areas via a series of elevated boardwalks. Earth tones and local materials prevail, with swaths of screened-in windows offering rain forest panoramas. Modern, tiled bathrooms feature biodegradable bath amenities and a screened-in wall looking out over the jungle. Rooms lack most modern amenities (no AC, TVs, or WiFi here), but do come with ceiling fans and dry boxes to help electronics cope with the humidity. Entertainment is instead delivered via private balconies, where a pair of hammocks invite lazing away and meeting the neighbors, which in our case came in the form of agoutis (foraging cat-size rodents) and curassows (rather clumsy, turkey-like birds). Come nightfall, falling asleep to the cacophonous nocturnal symphony of frogs and other critters proved a one-of-a-kind lullaby, offered only by the amazing Amazon, perhaps the wildest place on earth. 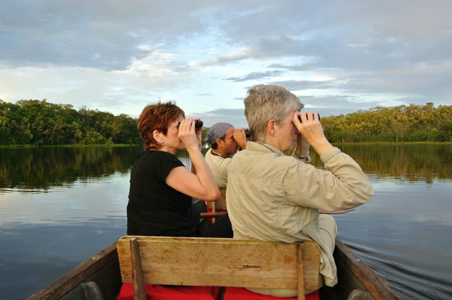 Sacha guests head out, in groups of six or less, for a series of well-structured rain forest activities. Each group comes paired with a duo of guides—one professional naturalist and an indigenous local—combining insights from both science-backed and passed-down ancestral knowledge. Their services were indispensable, with explanations that helped demystify the exuberant vegetation (they talked to the medicinal and functional uses of plants and trees), and hawk-eyed spotting skills for viewing the often elusive wildlife. The discovery-filled days are structured to maximize wildlife encounters, with fauna most active just after dawn and in the late afternoon, when the heat of the jungle subsides.

Our first post-dawn outing involved climbing a 130-foot "tree-house" tower, wrapped around the trunk of an enormous kapok tree, with an observation platform draped over its treetop branches. Even casual birders would find bliss here, with a scope set up for a true bird’s-eye view looking out onto perched toucans, macaws, and more. 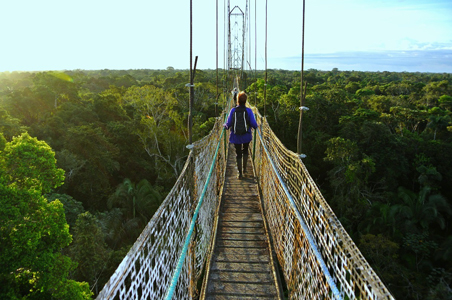 Another day, we tackled the 940-foot-long suspension canopy walkway, flung out above the rain forest canopy, linking a trio of tower observation decks. The vertigo-inducing climb delivered aerial shots from 100 feet above the forest floor, and silence, apart from the occasional bird call chiming through, or the roar of lazing howler monkeys in the distance.

Paddling in dugout canoes along winding backwaters revealed flooded forest banks lined with bromeliads, orchids, and for the very lucky, caimans or even the rare anaconda. A series of hikes delivered up-close looks at the vibrant ecosystem: towering kapok and fig trees, creeping vines and moss-covered undergrowth, and fascinating fauna displays from the forest floor to the canopy ceiling (we spotted highlights like a pair of crested owls and wide-eyed night monkeys hiding in a hollowed-out hole).

Another morning, we made way upriver to the Yasuní parrot lick, fronting the national park, where vibrantly colored parrots and parakeets regularly converge as a sort of social ritual, anchored on nibbling on the exposed swath of mineral-laden clay that climbs up from the riverbanks.

Afternoons in the soupy jungle were predictably hot, making a daytime dip in the lodge’s black-water lake a tempting option for those who trusted in guides’ assurances that the lake’s residents—piranhas, caimans, and electric eels—didn’t have us on the menu. I found the on-site butterfly house to be a safer bet, a conservatory for decidedly less threatening butterflies, showcasing some 40 local species.

Nightwalks and evening canoe paddles ventured out into the spooky-yet-serene darkness, in search of the glowing eyes of caimans, furry tarantulas, swooping bats, translucent frogs, and more nocturnal critters.

Six-night package rates, including two nights’ lodging in Quito, plus all meals and guided activities at Sacha Lodge, from $1,195/person; 30 percent off for kids under 12; www.adventure-life.com.