So you just survived that red-eye flight to South America. It’s time to get out and see Lima, São Paulo, Santiago, or Buenos Aires. On the way from the airport you’ve had your first glimpse of the incredible sprawl of these cities—in Lima, your cab driver was at war with the buses and mopeds zipping up and down the wide avenues during your thirty minute ride to the hotel…. Didn’t everything look a little bit the same? In Santiago, even against the looming Andes, the view from your airplane window showed cityscape stretching far and wide. So how does one make sense of these giant metropolises? The key is to choose your neighborhoods wisely, as we can help you do here, and to know what you must seek out in the way of local cuisine and local attractions. Here are our suggestions for Santiago, Buenos Aires, Lima, and São Paulo to help you begin your trip. 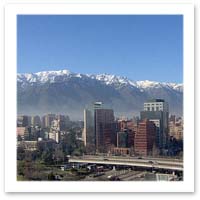 Santiago Centro is just one of 32 comunas that make up the city, each with its own distinct personality. You’d never confuse Patronato, a neighborhood north of downtown filled with Moorish-style mansions built by families who made their fortunes in textiles, with Las Condes, where the modern skyscrapers built by international corporations crowd the avenues. Likewise, the chic shopping centers of Las Condes have little in common with the outdoor markets and bohemian hangouts in Bellavista. (Take me to Santiago)

The ever-present jagged mountain peaks of The Andes ring this capital city. Wherever you go, you’ll see them and remember that you are at the edge of the world. Great Crafts Markets are filled with everything from fine woolen items to lapis lazuli. Occupying a lovely old building in the center of Santiago, the Museo Chileno de Arte Precolombino has a collection of indigenous pottery, jewelry, and artifacts that is a joy to behold. Last but not least, World-Class Wineries are within an hour’s drive. The Casablanca Valley is particularly up-and-coming at the moment.

Don’t miss the local bounty—seafood delivered directly from the Pacific Ocean. One of the local favorites is caldillo de congrio, the hearty fish stew celebrated by poet Pablo Neruda in his poem “Oda al Caldillo de Congrio” which is, in fact, the recipe. A pisco sour—a cocktail of grape brandy and lemon juice—makes a good start to a meal. Lunch and dinner are served quite late—beginning at 1 pm for lunch, 7:30 or 8 pm for dinner. People do dress smartly for dinner, but a coat and tie are rarely necessary.

Santiago has more than a dozen five-star hotels, many of them in the burgeoning Las Condes and Vitacura neighborhoods. You won’t find better service than at newer hotels such as the lavish Ritz-Carlton. But don’t write off the old standbys such as Hotel Plaza San Francisco. Inexpensive small hotels are harder to find but they do exist, especially around the Calle Londres in the city center and in the Providencia district.

“Our hotel in Santiago is the Radisson Plaza. About how much am I looking at for a cab to there from the airport? Which cabs are good and which are not so good? Should I even be thinking about messing with the busses? Neither of us speak Spanish.” –posted by TodPBrown (View responses) 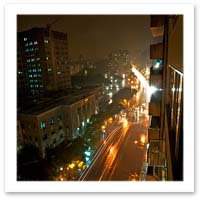 Forget Recoleta, forget Palermo: trend spotters agree that south is the new north. Neighborhoods below Avenida Rivadavia are the ones to watch. Designers and restaurateurs are upping sticks to San Telmo, and those in the know tip run-down Barracas, packed with abandoned factories just begging for loft conversion, as the next big real-estate bubble. (Take me to Buenos Aires)

You must not miss Plaza de Mayo, center of civic and political life. This is where Evita told a rally of thousands not to cry for her. The Museo de Arte Latinoamericano de Buenos Aires (MALBA) is BA’s first truly world-class museum and has Kahlos, Riveras, and Boteros. Sunday sees Plaza Dorrego, a quiet San Telmo square, transformed into BA’s biggest antiques market. Junk, memorabilia, and, occasionally, genuine antiques are all part of the cult of nostalgia celebrated here, in the shadow of century-old houses.

Areas like Palermo Soho and Palermo Hollywood have emerged as the epicenters of Argentina’s modern food movement. In these neighborhoods, sushi is all the rage, and you can find Patagonian lamb, trout, and king crab rubbing elbows with Asian curries and northern Argentine locros (stews).

But much of the old guard still stands strong. Most porteños have Italian ancestry, which is evident in the proliferation of pizzerias all over the city, from the simple shops to the trendy pizza-and-champagne joints. But don’t miss the chance to try the deeper-dish Argentine-style pizza, the most classic of which is the muzzarella (cheese and tomato pizza) and the immortal combination of jamón (ham), morrón (roasted red pepper), and aceitunas (olives). Most important of all are the parrillas, or steakhouses. Only here will you see an entire family, toddlers in tow, strolling in for a steak dinner at midnight.

The real buzz these days is about boutique hotels, which have been popping up all over the city, but especially in the hot spots of San Telmo and Palermo. Most of them combine a minimalist vibe to contrast the renovated spaces in which they’re housed. Most are outfitted with sleek furniture, wood-paneled walls and floors, quaint outdoor gardens with reclining lounge chairs, bamboo, and plants, and the requisite pool or parrilla (steak house). It’s a style that has been perfected in Buenos Aires in recent years, and one the city can call all its own.

“My husband and I have about 9–10 nights for a trip to Buenos Aires. We want to make 2 stops – maybe somewhere in Chile, Uruguay, Iguazu Falls, or Bariloche. What side trip would you suggest if we can only take 1?” –posted by bmcc (View responses) 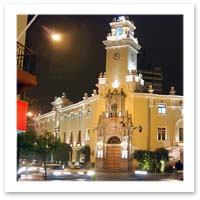 When people discuss great cities in South America, one that is often overlooked is Lima. But Peru’s capital can hold its own against its neighbors. It has an oceanfront setting, colonial era splendor, sophisticated dining, and nonstop nightlife. It’s true that the city—clogged with traffic and choked with fumes—doesn’t make a good first impression. But wander around the regal edifices surrounding the Plaza de Armas, among the gnarled olive trees of San Isidro, or along the winding lanes in the coastal community of Barranco and you might find yourself charmed. (Take me to Lima)

In El Centro, Iglesia de San Francisco’s facade is considered the height of the Lima Baroque style. The crypt below stores the bones of dearly departed monks. Calle Alcanflores, which runs through Miraflores, sells all manner of handicrafts, from hand-woven rugs to silver-filligree jewelry.

Local Cuisine: It’s All About the Fish

In Peru, restaurants known as cebicherías serve more than the marinated fish called ceviche. The menu may intimidate those who can’t tell lenguado (sole) from langosta (lobster). Don’t worry—just order a series of dishes to share. Local families pass around huge platters of pescado until they are picked clean, then gesture to the server for the next course.

Lima isn’t lacking for lodging—you can’t go far before you see the flurry of flags above a doorway indicating that international travelers are welcome. If you have some money to spend, the capital has some astonishing accommodations. For something special, pass by the towers of glass and steel and head to such charmers as the Miraflores Park Plaza, the Country Club Lima Hotel, or the Gran Hotel Bolívar.

“This is our first visit to South America. We have about two days in Lima. Can anyone please suggest some must-see places. Also, is it advisable to hire a guide to take us around or are is it ok for us to go around by ourselves?” –posted by abulusu (View responses) 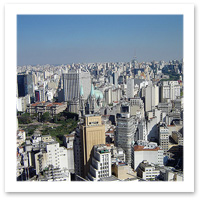 São Paulo is a megalopolis of 19 million people, with endless stands of skyscrapers defining the horizon from every angle. The largest city in South America, São Paulo even makes New York City, with its population of about 8 million, seem small in comparison. Most of the wealthiest people in Brazil live here—and the rest of them drop by at least once a year to shop for clothes, shoes, accessories, luxury items, and anything else that money can buy.

Despite—or because of—these qualities, many tourists, Brazilian and foreigners, avoid visiting the city. Too noisy, too polluted, too crowded, they say—and they have a point. São Paulo is hardly a beautiful city; it’s fast-paced and there’s lots to do, but it’s also a concrete jungle, with nothing as attractive as Rio’s hills and beaches. Yet, even as the smog reddens your eyes, you’ll see that there’s much to explore here. (Take me to São Paulo)

Shop among Brazil’s rich and famous in the Jardins or Itaim areas. Enjoy the music that flows through the streets and can be heard around every corner. Futebol, or soccer, is truly “the beautiful game” in Brazil, and in São Paulo futebol is played everywhere.

Local Cuisine: All Meat, All the Time

Brazilian churrascarias are a carnivores dream, with their all-you-can-eat skewers of barbecued meats and impressive salad buffets. For in-between times, just about every bar will offer a selection of grilled meats, sandwiches, and deep-fried favorites for casual grazing. On Wednesday and Saturday, head to a Brazilan restaurant for feijoada—the national dish of black beans and pork. Ask about the other traditional and regional Brazilian dishes as well.

São Paulo is all about business, and for the most part so are its hotels. Most of them are near Avenida Paulista, along Marginal Pinheiros, or in the charming Jardins neighborhood, where international businesses are located. But catering to business doesn’t mean they’ve forgotten about pleasure. On the contrary, if you’re willing to pay for it, the city can match London or New York for unfettered elegance.

“I have just spent all day planning a Christmas-time visit to Brazil, without focusing on the fact that it might be too hot and humid! Our itinerary would be Costa Verde, Rio and Iguazu. We do not have another time to visit. We will be traveling with teenagers. thanks for any input on how steamy we might expect the weather to be.” –posted by skatedancer (View responses)