London… Paris… Rome… A handful of European capitals hog the touristic limelight. Yet there are many others, each ideal for certain types of travelers, that deserve more than their current C-list status. Ready to re-think your bucket list? Take a peek at these underrated cities. 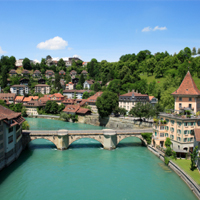 If you’re looking for a family destination make it Bern, baby, Bern. Einstein, who did his best work here, loved Switzerland’s capital. But it doesn’t take a genius to appreciate Bern’s stunning setting or UNESCO-designated Old Town. (The River Aare, which threads through it, accounts for the former; Swiss neutrality in both World Wars is largely responsible for the latter).

Aesthetics aside, Bern is safe, clean and compact. That’s a real plus for parents. Moreover, from the Bärengraben (Bear Park), for which the city may get its name—”bern” is a local contraction of the German word “bären” or “bears” in English—right up to the panoramic Gurten play park, it seems tailor-made for kids. Walking in the medieval Altstadt is the next best thing to time travel and even local museums have family appeal: for instance, Zentrum Paul Klee (devoted to the native-born modernist painter) includes innovative hands-on activities aimed at small fry.

Your brood can also enjoy numerous soft adventures within the city limits. In summer, those include drifting down the swift-flowing river, clambering Tarzan-style at the Ropetech adventure course, or biking for free courtesy of Bern Rollt. As an added bonus, Bern’s location allows easy entrée to popular regions like the Bernese Oberland, the Jura, Lake Lucerne and the Valais.

Most North Americans find it hard to get a good read on Brussels– the fact that its civic icon is a statue of a urinating boy may have something to do with that! Nevertheless this city is both the capital of Belgium and, as the base of key EU operations, the de facto capital of Europe.

Globetrotting gourmets contend Brussels is a front runner for the “Culinary Capital” title too. It boasts over a dozen Michelin-starred restaurants (an impressive number for a city with about one million residents) and over two dozen designated Bib Gourmand eateries which serve three-course meals for €35 max. Some local specialties cost even less, among them the mayo-dipped Belgian frites we indelicately call French fries.

Then there are those twin pillars of national cuisine: chocolate and beer. Remember, Belgium is home to fabled chocolate purveyors like Neuhaus and Leonidas and produces 450-odd types of beer. (You’re on vacation. Feel free to try ’em all.) Brussels Tourism has a handy Gourmet Trail map you can download online covering related sites such as the Musée du Cacao et du Chocolat, the Maison des Maitres Chocolatiers (a new Grand-Place showcase for demos and tastings) and the Museum of Belgian Brewers.

Itinerary: Visit Brussells on two of our new itineraries: Paris to Amsterdam by Train, and Belgium for Beer Lovers. 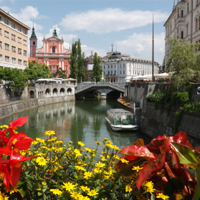 Come to Slovenia’s capital and you’ll soon discover that love is in the air. For starters, it has the whole “dreamy architecture” thing sewn up because it’s dominated by a fairytale castle, and blessed with swoon-worthy structures that range from a bubblegum pink Baroque church to a fanciful Art Nouveau bridge.

Ljubljana’s charm, however, rests on simple pleasures rather specific sites, which means you can zero in on your partner instead of compulsively visiting attractions. Strolling hand-in-hand through the cobbled streets of the city center is one romantic must-do. (Alternately you can rent bikes for €1 each; riverboat rides and hot air balloon trips are also a bargain at €8 and €80 respectively.)

Dining ranks high on the “seduction scale” too. After all, like neighboring Italy, Slovenia is renowned for gustatory delights and fine local wines which may be savored at one of the many intimate eateries that line the Ljubljanica River.

Finally, Ljubljana’s modest size (it has only 275,000 inhabitants) works in its favor since it makes getting around a breeze. Indeed, just about everything about a holiday here is easy… at least once you’ve figured out how to pronounce the city’s name. For the record, it’s Lube-yana.

Torn between sightseeing and summertime fun in the sun? Valletta, the capital of Malta, comes to the rescue by offering a surfeit of both.

From ancient times onward, conquerors sailed to this tiny island nation hoping to take advantage of its strategic Mediterranean location, and they left in their wake an eye-popping assortment of historic sites. Truth is, you could spend an entire trip ogling edifices funded by the Knights of St. John: wealthy Crusaders who transformed Valletta into the poster child for over-the-top Baroque architecture.

But when you want to swap touring for tanning – or simply need a respite from the 90-plus degree heat – beaches lapped by the Mediterranean’s clearest water are close at hand. (Snorkelers and divers will be pleased to know the visibility here extends up to 130 feet).

If it’s hot entertainment you’re after, you can find that around Valletta once the sun goes down. MTV hosts a free mega-concert on the island every year in late June that’s broadcast continent-wide (Lady Gaga and the Black Eyed Peas headlined the 2009 event); while Valletta’s suburban resort zone, Paceville, draws clubbers year-round by importing big-name name guest DJs from across Europe.