News Larry Bleiberg You Can Finally Look Inside This Stunning D.C. Landmark. But Only for Another 25 Days
Home  >  News   >   Europe’s 3 Most Luxurious Rail Trips

While trains have always been a good option in Europe, a few standouts address the modern traveler’s need to simplify and relax. In addition to the obvious benefits—freedom from lengthy security queues, carry-on restrictions, and worries over baggage going missing—the luxury trains below focus on an old-fashioned appreciation for lovely scenery, luxurious on-board sleeping cabins, lavish food and drink, and attentive service. 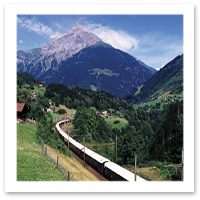 This legendary train still leaves billowing clouds of glamour everywhere it goes. Once a preferred mode of travel for early 20th century royalty and movie stars traveling the Continent, the refurbished Orient Express now makes use of original 1920s and 1930s sleeping, restaurant, and bar cars as it journeys from London to Venice and beyond.

Décor and service: Original Art Deco marquetry and fittings have been retained, but updates have been added to conform to modern safety standards. The cabins are compact but comfortable, with mahogany washbasin cabinets and banquette sofas. While you relax over a five-course dinner, discreet but highly efficient stewards will transform your private cabin into a bedroom. Before you hit the hay, though, stop by the baby grand piano and dedicated pianist, which enhance the convivial atmosphere in the bar car (a conviviality that can go on into the small hours of the morning). Guests tend to wear cocktail attire or black tie for dinner, so this is not a trip for people who like to be casual at all times.

Classic itinerary: The first leg of the journey is in British Pullman cars of a similar style and vintage to the Orient Express. At the channel, passengers transfer to a luxurious if somewhat less atmospheric motor coach for the half-hour trip through the Eurotunnel (your luggage is transferred for you), and then board the Orient Express itself at Calais. From there it is a day, a night, and into the following afternoon until Venice.

Extend your trip: Itineraries including destinations beyond Venice, such as Rome, Prague, and Istanbul, are available. However, these involve some overnight hotel stays since the train itself lacks onboard bathing facilities. The Orient Express operates from March through November. 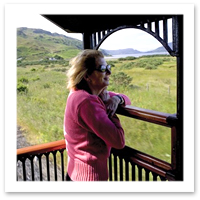 The Royal Scotsman
Classic route: Northern loop from Edinburgh to Keith and back again
Duration: About five days
Along the Way: East Coast, West Coast, Highlands

If the Orient Express is the rolling equivalent of a five-star Art Deco city hotel, the Royal Scotsman is its Edwardian country house equivalent.

Décor and service: Unlike those aboard Orient Express, the twenty wood-paneled cabins of the Royal Scotsman have writing desks, hanging space, and, most importantly, private bathrooms with showers. And while the Royal Scotsman may not have its own piano bar, it does have an observation car, the train’s “drawing room,” which offers sofas, armchairs, glossy magazines, reading lamps, and drinks. If the Highland air isn’t excessively bracing, you can also take in the view from an open-air platform at the rear of the train. Meals emphasize locally-sourced ingredients such as shellfish, game, Aberdeen Angus beef, and, naturally, salmon. Tables are for two, four, or eight, so be prepared to meet your fellow guests. The train has a 3-to-1 passenger-to-staff ratio, with a maximum guest capacity of thirty six, and overnights are in sidings to permit uninterrupted sleep.

Classic itinerary: You’ll begin and end in Edinburgh. Zip up the east coast to Keith, then over to the west coast near Plockton, then back down to Perth and Dundee for the final night. The train stops to allow for some sightseeing, including private tours of castles, moorlands, and distilleries plus beach and pine forest walking, fishing, skeet shooting and even golf. Not recommended for anyone with an aversion to tartan or alcohol.

Extend your trip: All trips start at Edinburgh, and can range from two to seven days. You can visit many more places in addition to those listed above, including Loch Lomond, Rannoch Moor, and Ben Nevis. The Royal Scotsman runs April through October. 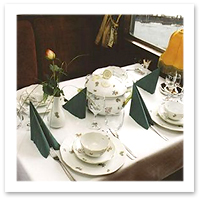 The brand new Danube Express offers a modern luxury counterpoint to the period charms of the Orient Express and Royal Scotsman, as well as unique itineraries through former Eastern Bloc countries that would have been unthinkable before the fall of the Iron Curtain.

Décor and service: There are six two-berth compartments per sleeping car, each with washbasin and hanging space. The two “classic” sleeping cars have shared bathrooms and showers, while on the three “deluxe” cars these facilities are en suite. The Danube Express has borrowed a page from the Orient Express’s playbook and has its own resident pianist in the lounge car, as well as stewards to make up your bed during dinner. The on-board cuisine incorporates Eastern European specialties such as smoked trout and venison ragout, while the wine list features bottles from Hungary’s acclaimed Szeremley vineyard.

Classic itinerary: The eight-day tour starts in Budapest (departure point for all Danube Express trains), then crosses the Great Hungarian Plain into Slovakia’s Tatra Mountains. The next day includes a tour of Krakow before the train heads to the Czech Republic, where passengers disembark for visits to Prague’s St. Vitus’s cathedral and the Old Town. Finally, in Berlin, there’s more sightseeing followed by an excursion to Potsdam and the Wannsee lakes.

Extend your trip: Other itineraries include an exotic train cruise to Transylvania and the Bosphorus, which includes visits to destinations ranging from a medieval city reputed to be Dracula’s birthplace to the Blue Mosque and the Topkapi Palace, and a trip to Vienna incorporating the lakes and mountains of Hungary, Croatia, and Austria.