With the high cost of air travel this summer, more people are considering the classic European experience of getting around the continent by train—it’s not just for backpackers. Throughout Europe the primary means of public transportation between cities is the train as the network of railways is much more extensive than what you find in North America. Whether you found a great flight to a not-so-great city and just need a transfer, or are planning to explore on a grand tour, here are some general factors to consider when traveling in Europe by train.

Start by reviewing rail route options online. In many countries maps are not customarily provided to passengers. You may do best to consult a map on the Internet first or obtain one from a travel agent in your home country.

Virtually all European rail carriers, including the high-speed ones, operate a two-class system. The difference between first and second class is often marginal, particularly on short-haul regional trains. First class costs substantially more, and is usually a luxury rather than a necessity. In some cases, though, you can only reserve seats in first class, meaning that with a second-class ticket on a full train you may end up standing. The differences in classes are greater on long-haul express trains (such as Eurostars). Some of the poorer European countries retain a third class, but avoid it unless you’re an adventure-minded budget traveler.

Some national high-speed train systems, which see trains traveling at an average speed of 125 mph, have begun to link up to form the nucleus of a pan-European system. On a long journey you still have to change trains a couple of times, as the national railways jealously guard their prerogatives. France, Switzerland, Italy, Belgium, the Netherlands, and Germany are among the nations offering this service. Remember that this service requires reservations, and doesn’t come as cheaply as conventional rail service.

Save with Rail Passes 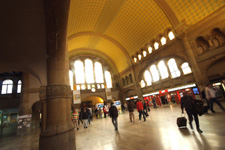 Eurail passes, available for travel in most European countries except Great Britain, can be a good deal if you’re planning on lots of train travel. They have to be purchased from home before you travel; for details, see their web site, www.eurail.com. Note, too, that even with a pass, you’ll pay a supplement for riding high-speed trains. There are many types of passes with different time frames and geared to different groups; think carefully before picking one. Here are some of the most popular:

Automated ticket machines in Europe’s larger towns and cities can switch back and forth between any number of languages. The humans behind the counter may or may not be able to do the same.

In Europe, train platforms in larger towns and cities are divided into sections designated by letters of the alphabet. The sign announcing the next train will often tell you where the first- and second-class carriages will stop, letting you stand in the most convenient part of the platform.

What are your favorite tips (or trips!) for train travel in Europe?