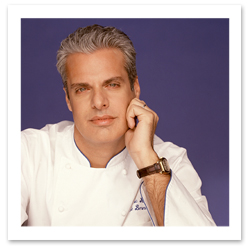 In more than a decade at the helm of New York’s seafood palace Le Bernardin, 42-year-old Eric Ripert has garnered every gastronomic accolade, including a Michelin three-star rating, consistent “Best Food” rankings by Zagat, and multiple James Beard Awards. Born in Antibes on the French Riviera, Ripert learned his way around his kitchen at his grandmother’s knee, beginning his culinary career at Paris’ La Tour d’Argent in 1982 before rising in the ranks at Joël Robuchon’s Jamin.

Arriving stateside in 1989, Ripert worked with Jean-Louis Palladin and, briefly, David Bouley, before Le Bernardin reeled him in. He opened his first “name” restaurant, Blue by Eric Ripert, at the Ritz-Carlton Grand Cayman in 2005. Westend Bistro by Eric Ripert is slated to debut November 2007 in Washington D.C., followed by another new restaurant by late 2008 in Philadelphia.

Fodor’s caught up with Ripert at Blue to get the inside scoop on where to eat and play in Grand Cayman.

Fodor’s: Tell me about Blue by Eric Ripert. What challenges did you face opening an island restaurant?

Eric Ripert: When we opened we were challenged by the quality of the seafood, which sounds illogical, but most fish here comes frozen from the U.S. We visited fishermen, created a network, got fresh catch regularly. It’s the only item the hotel allows cash for, so Richard (Brower, the chef de cuisine) carries a big wad. We fought passionately for the quality of the seafood, since that’s one of my trademarks.

Fodor’s: How did you decide on the Ritz-Carlton and on Grand Cayman?

ER: The resort owner Michael Ryan was in New York for dinner at Le Bernardin. He wanted to discuss the Ritz and me opening its signature restaurant. When I came down, he picked me up, put me on a boat to swim at Stingray City, loaded me with champagne, then came straight here to discuss business. I loved it, felt confident because of his commitment to quality and service. I couldn’t have delivered that level of quality on my own. I even worked with the architect to add signature design elements, like the use of blue accents and woods, reminiscent of Le Bernardin.

Fodor’s: Where would you take your best friends on Grand Cayman for their first meal?

ER: Blue! But afterward we’d go to Calico Jack’s. It’s a beach bar, really wacky, especially Friday nights. Anything goes. Come to Blue, go to your room, put on a bathing suit, have a couple of tequilas. It’s my pilgrimage to de-stress.

Fodor’s: What other island restaurants do you recommend?

Fodor’s: What local dishes do you enjoy?

Fodor’s: Do you bring your son?

ER: My four-year-old loves it. We took him to Stingray City, put him in the water to swim with the rays, but he was perhaps too young because he clung to us.

Fodor’s: So Stingray City is special?

ER: Magical. You can feed — even touch — the rays, or snorkel in deeper water. I use frozen squid as “bait.” It still has ink, which attracts the rays. Hire a smaller boat and go near sunset, when it’s deserted.

Fodor’s: Where should people stay?

ER: I honestly feel comfortable suggesting the Ritz. I’ve rarely seen a hotel with such good service. And I travel extensively. For example, my son was playing on the beach, we looked for him and the mattress guy was building sandcastles with him. That’s the mentality. The commitment is impressive.

Fodor’s: Are there any comparisons (or differences), aside from the obvious between the Caribbean and the Mediterranean?

ER: It’s a different feel and look, of course, as are the cooking ingredients and preparations. But both cultures place great emphasis on food as a key part of their lives and borrow from many heritages. And both cultures know how to relax and enjoy themselves.

Check out Fodor’s Cayman Islands planner for everything you need to know about planning your visit.