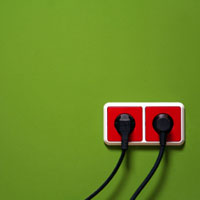 Not long ago I was vacationing overseas with a friend when, in preparation for a big night out, she flicked on her curling iron… promptly frying the appliance and her hair in the process. It wasn’t a pretty sight, although I couldn’t actually see that until the lights (which had been knocked out in the entire hotel) came back on.

Attempting to use any electrical device with an incompatible foreign system can lead to a similarly hair-raising situation. Here’s what you need to know to power up properly.

Determine the right plug shape for your trip

If you are vacationing across the Atlantic or Pacific, the first thing you’ll likely notice is that plugging your appliance in is impossible because it simply won’t fit into the socket. The reason is that the two-parallel-prong plug which is standard issue in North America (plus swaths of Central and South America) is seldom used anywhere else. The receptacle designed to receive it might have room for three round prongs or perhaps three fat flat ones that jut off at odd angles. Indeed there are endless configurations of plugs across the world. The good news is that an adapter (basically a connector that you piggyback your own plug into before inserting both in the outlet) offers a quick, affordable solution to the dilemma. You can find a useful comparison chart of adapters at electricaloutlet.org.

Determine the standard voltage for your trip

Just because your plug fits doesn’t mean your appliance can handle the type of power now coursing through its cord. You see, in addition to differences in plug shapes, there are differences in voltage. Whereas our electrical system is based on 110 volts, 220 volts is the norm abroad. (FYI, the frequency is different too: the cycle being 60Hz here and 50Hz most other places). This means you’ll also need a converter to temper the excess power if you want to keep your appliance from burning out. There are basically two types: one for “hot stuff” (think hairdryers or irons) that draw up to 2000 watts, and a second transformer-style one for non-heating gizmos (such as electric razors or battery rechargers) that draw up to 40 or 50 watts.

Get rid of excess gadgets

One way to reduce the amount of hassle from gadgets and electricity is to simply leave unessential appliances home. Nobody really needs an electric toothbrush; moreover, hairdryers and, to a lesser extent, irons, are already widely available in hotels. Another option is to go for battery-operated models or plug-ins with dual-voltage capacity. Regarding the latter, you might already unwittingly own devices that run on either 110 or 220 volts. An increasing number do, among them small appliances with a manual switch and newer-model laptops that convert automatically (the computer power cord should have a label saying “Input 100V-240V / 50Hz or 60Hz”). In that case, a plug adapter alone suffices.

Buy your adaptors and converters at home

Buying adapters and converters once you’re on the road is a pricey proposition. So load up before departing in a specialty store or department store luggage section. Prefer shopping online? Magellan’s and International Electrical Supplies both boast an impressive array of products plus they have easy-to-decipher charts, complete with pictures, that explain precisely what is needed where. The best choice for travelers visiting multiple countries is a compact kit with assorted adapters and a two-in-one converter. If you’re toting a computer (even one that doesn’t require a converter) it’s wise to purchase a surge protector specifically designed for higher voltages as well—particularly if your destination has an unreliable electrical supply.