How’s this for a job description: "seeker of ultimate deliciousness." That pretty much sums up the vocation of David Rosengarten, James Beard Award-winning food and wine writer and pioneering Food Network personality. Rosengarten, who just released his Wine Manifesto has been roaming the globe picking not only the best wines he can find for his signature "Wine For Food" selections, but he is also seeking out anything and everything delicious—from the world’s best caviar to the most enticing hot sauces.

We recently followed the jetsetting Rosengarten on a two-day jaunt focusing on the ultimate eats of the northeast. With a private plane all fueled up, the expedition promised a tasty adventure and an insight into one of the food world’s keenest palates.

Day One: Crab and Cheesesteaks 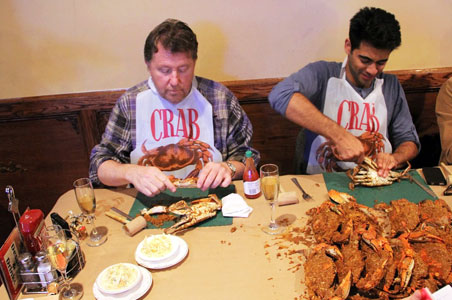 The crabs are flown in daily from Texas and Louisiana, but Costa’s Inn is a classic Maryland bib-and-mallet temple, a family-run institution since 1971. Rosengarten pre-ordered a pile of "whale" crabs when he reserved, so named for their size and meatiness. They arrived, steamed to perfection, crusted with the spicy, proprietary salt and paprika seasoning, and were poured right onto the brown-paper covered tabletop. David popped a Michel Gonet 2006 champagne to open the appetite. It worked, and suddenly, elbows were on the table, the mallets were up, the shell buckets were in place and we were ready to dismantle the crustaceans into bits. But first, Rosengarten shared a few tips for better eating:

Turn the crab onto its back.

Take off the "apron," the covering on the abdomen.

Then "kill the gills," meaning, remove the lungs.

Scoop out the roe and tomalley.

Grabbing both hands around the legs, break the crab in half.

Then grab each half, and break in half again.

Pull the meat out and enjoy!

After the meat was picked, and the shells were licked, it was time to get back on the plane. Next stop: the City of Brotherly Love. 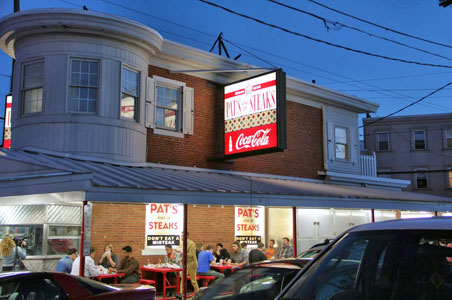 It seems there’s nothing Philadelphians enjoy arguing about more than who makes the best cheesesteak. There is an art to the deceptively simple sandwiches, as locals will tell you, each pledging their allegiance to a favorite stand. Clever Rosengarten planned a progressive tasting so that we were fully able to understand the nuances of Philly’s honored hero. But before we tasted, Rosengarten briefed us on cheesesteak etiquette.

Be patient and prepared to stand on an epic line.

Decide if your propensity is toward Whiz, American, or Provolone. (Many locals believe that Whiz makes for the only true cheesesteak; cheese snobs tend to go for the provolone).

Decide if it is "wit" or "wit-out" fried onions. And order accordingly. Example: "I’ll have a whiz wit, please." Or "I’ll have a provolone wit-out."

A sweet and hot pepper garnish is always a good idea.

Assume the stance before eating: spread the legs apart, and stand like a chicken, if you will. Then bite in and the "drip" won’t stain your pants.

Round one was at Pat’s. Founded in 1930, it’s the oldest of the city vendors. (Arch-rival Geno’s across the street didn’t open until 1966). We ordered an assortment of wits, wit-outs, whizzes, and provolones. I discovered I’m a true cheese snob: provolone all the way for me, though both steaks did the job. They were filling, solid sponges for late-night drinking binges.

The next stop was an ace pulled out of Rosengarten’s back pocket: Mamma’s Pizzeria, just outside of town in neighboring Bala Cynwyd (426 Belmont Ave., 610-664-4757), and it trumped Pat’s by far. The secret to the sandwiches’ success: a proprietary three-cheese blend that we guessed was mozzarella, provolone, and jack. Mama’s had no epic line, better quality meat, and a fresher bun than Pat’s.

Mama’s readied us for "Prime" time: the posh, $100 cheesesteak served at Barclay Prime. At this elegant, buzzy Stephen Starr restaurant on Rittenhouse Square, the meat is wagyu, the whiz is truffled, and it comes "wit" foie gras and a half bottle of Perrier Jouet. Rosengarten bypassed the bubbly in favor of a Bordeaux tasting, the perfect complement to the meaty nightcap. 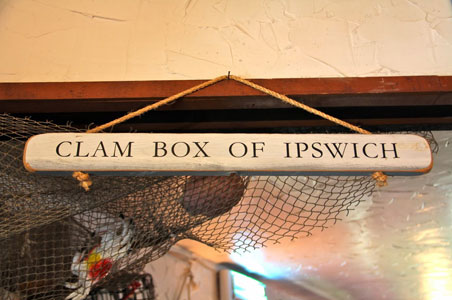 The next day we were ready to fill our bellies with bellies—clam bellies, that is. So off to Ipswich we flew. The coastal town, about 30 minutes north of Boston, is the clam capital of the northeast, famous for its soft shells. As we approached the 75 year-old The Clam Box, a deep-fried aroma saturated the air. The spot quite literally resembles a box, an ash colored square with red-and-white striped awnings. The line snaking from the order window here made Pat’s look like peanuts. Before we ordered, Rosengarten posed the existential question: bellies or strips? We tried both, of course. When tasted side-by-side, we preferred the sweet, briny, crunchy, salty freshly-fried bellies for their texture over the chewier strips. But both were equally addictive.

Ipswich is also known for its brewing, so we sampled the clams along with the town’s best local brews: Ipswich original, IPA, oatmeal stout, and dark ales. Needless to say, we got back on the plane, happy as fried clams. 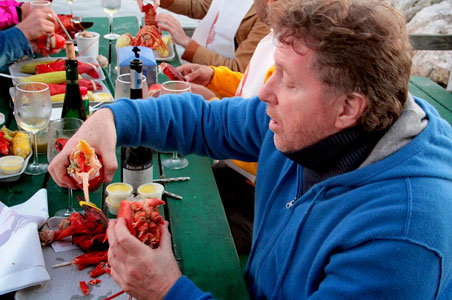 The last stop bookended the journey once again with bibs as we alit in lobster land. At the docks of the Five Islands Lobster Co., the lobsters are never tank-stored—just pulled right out of the surrounding waters, sorted, and served.

Rosengarten had one grape, and one grape only in mind for this feast: Riesling, his ultimate pairing for the sweet shellfish because of its perfect sugar/acid balance. We gathered around the dockside picnic tables as the sun set, and ordered up. The meek, and full of clams, opted for single pounders, while the brave went for "the big boys" weighing in at 2.5 pounds. They arrived achingly fresh and plump with meat. "Who needs crackers and picks?" Rosengarten asked, and smiled with satisfaction when no one responded. "That’s right, we use our hands!" he said, as the group twisted and broke down the shellfish until they were simply just shells. As the pile of lobster carcasses grew, darkness crept in, and we knew it was time to head back to the plane.

Full, happy, and all the wiser thanks to our guide, we took off, with just a taste of what it’s like to be a "seeker of ultimate deliciousness".