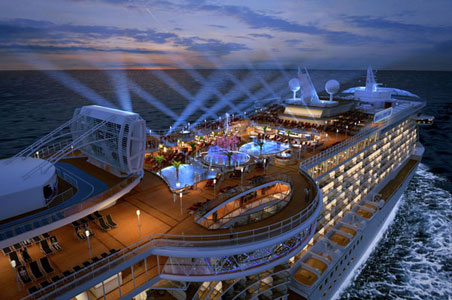 Who doesn’t love a little light show when on vacation? From Hong Kong’s Symphony of Lights in Victoria Harbour to Epcot’s IllumiNations at World Showcase in Walt Disney World to Las Vegas’ Fountains of Bellagio, these spectacles entertain and amaze us and soon there will be a fantastic water and light show at sea.

Princess Cruises developed this signature performance as part of the deck features aboard the new Royal Princess. Making her debut in June 2013, this 3,600-guest ship offers some truly unique deck features. The Water and Light Show takes place on the top deck on an "island" lined with palm trees between the ship’s two fresh water pools. A fountain featuring 85 jets that shoot water 33 feet into the night sky is paired with a sophisticated lighting and sound system. This is something everyone will want to see at least once during the voyage.

In addition to the Water and Light Show, the top deck will feature a dramatic glass-bottomed "Sea Walk" extending 28 feet beyond the starboard side of the ship and 128 feet above the ocean. On the other side of the ship, the SeaView Bar also extends over the waves for a truly unique vantage point of the ocean.

Royal Princess, like many other ships, will show movies under the stars. This poolside theater will feature true widescreen viewing that’s 30 percent larger than what’s found on older ships. The improved screen and state of the art audio/video system will reinvent the concept of open-air movie going. Princess plans to show movies, concerts, and even some sporting events. (Imagine watching the Super Bowl with the stars twinkling overhead!)

Finally, the Princess entertainment staff has dreamed up a way to transform the top deck’s island into an outdoor dance floor for what they’re calling the "Ultimate Deck Party." A DJ will be on hand for these events and will be perched high above the island on a specially made balcony.

Royal Princess sets sail in June 2013 and will tour the Mediterranean throughout the summer before heading to the Eastern Caribbean in the fall.