Coronavirus David Silverberg Are Your Kids Heading Back to Summer Camp? Here's What You Need to Know
Home  >  News   >   How to Travel Like You Own Downton Abbey

As Season 3 of the acclaimed and addictive Masterpiece series Downton Abbey draws to its climactic close this Sunday, Feb. 17, many viewers are likely to go into withdrawal: No more sumptuous castle interiors, dramatic goings on in the servants’ hall, highly competitive cricket matches, or aristocratic garden parties. Don’t fret. Take some time this summer to vacation in England or Wales, where you can not only tour the regal Highclere Castle, on the Berkshire-Hampshire border where the series in filmed on location, but you can also indulge in some of the very same activities that the Crawleys and their guests enjoy. 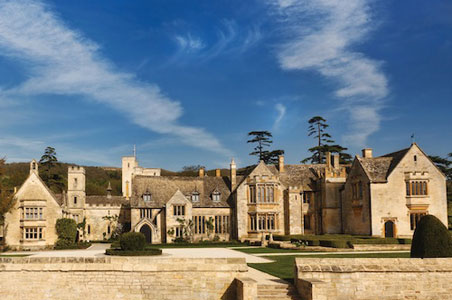 Beginners can opt for clay pigeons while those seeking an actual hunt can go after pheasant or partridge—but everyone in your party can make like a Crawley at this five-star luxury retreat in the English Cotswolds. Ellenborough Park has teamed with Ian Coley Shooting School to arrange outings for up to 16 people to nearby shoots—pull on your boots, call the dogs, and off you go. Upon your return, you can even enjoy a classic shooting lunch at the atmospheric 62-room, 90-acre country house hotel, where rooms start from $360/night. 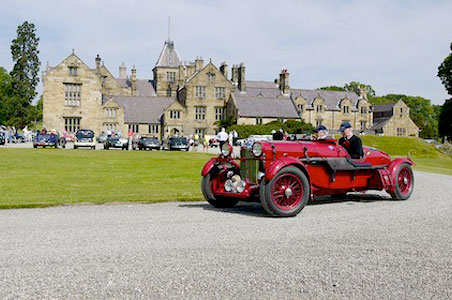 If you drool every time a guest motors up Downton Abbey’s driveway in a vintage automobile, get ready to experience it all in person during the Three Castles Welsh Classic Trial (June 5-8, 2013), which is based in Llandudno near historic Bodysgallen Hall in North Wales. From this circa-1620 manor house you can easily head to the seaside Llandudno Promenade to enjoy the Concours d’Elegance (the gathering of the cars) and then watch the start as 125 vintage roadsters head out for 450 miles of rally trials. Rooms from $295/night. 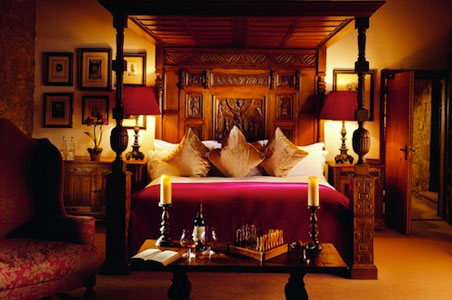 Learn about cricket at Fawsley Hall

If you scratch your head over the rules of this great English pastime, attending a match or two at the Northamptonshire Cricket Club should set things straight. The season runs from mid-April until the third week of September, and while learning the game that Downton Abbey residents played so stylishly against the local villagers (sadly the uniforms nowadays are quite baseball-like), you can reside in aristocratic style at Fawsley Hall, a 58-room Tudor-style country house where Queen Elizabeth 1 stayed in 1575 (in the elaborate 1575 Suite). Rooms from $289/night. 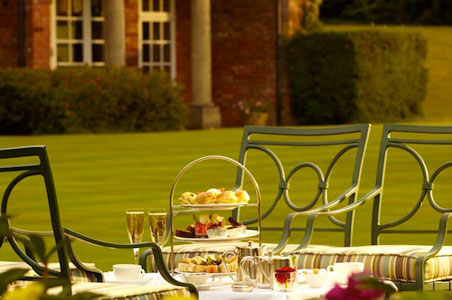 When the weather warms up, afternoon high tea service at Chewton Glen moves to the Terrace, turning it into a delectable garden party that even the Dowager Countess would approve of. From 3-5 pm, guests gather to enjoy smoked salmon sandwiches, homemade scones with clotted cream, sweet cakes, and more, plus a selection of almost a dozen teas (something tells us the Dowager Countess might opt for Gunpowder, a "brisk and pungent" green tea). This five-star country house hotel in Hampshire in the South of England features 70 rooms and suites set on 130 acres, with rooms from $509/night. 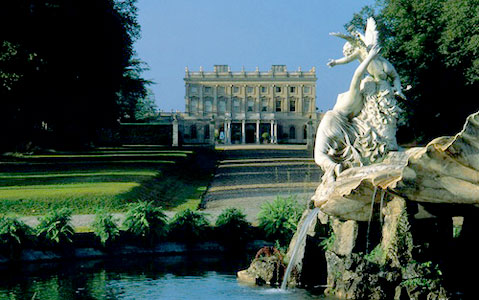 Dress up for the Royal Ascot at Cliveden House

If you envy the fabulous hats and gowns of the Crawley ladies, you can step back in time and into feathered fascinators and dandy top hats in the grandstand at the Royal Ascot race course (June 18-22, 2013). Cliveden House, a stunning manor that’s been witness to 300 years of power (every British monarch since George I has stayed here), is just 30-minutes by car from the racecourse, where rooms start at $603/night.